The Daily Nexus
Music
Cage the Elephant Throws Private Show and Sweat onto the Funk Zone
October 22, 2014 at 11:41 am by Ryan Mandell 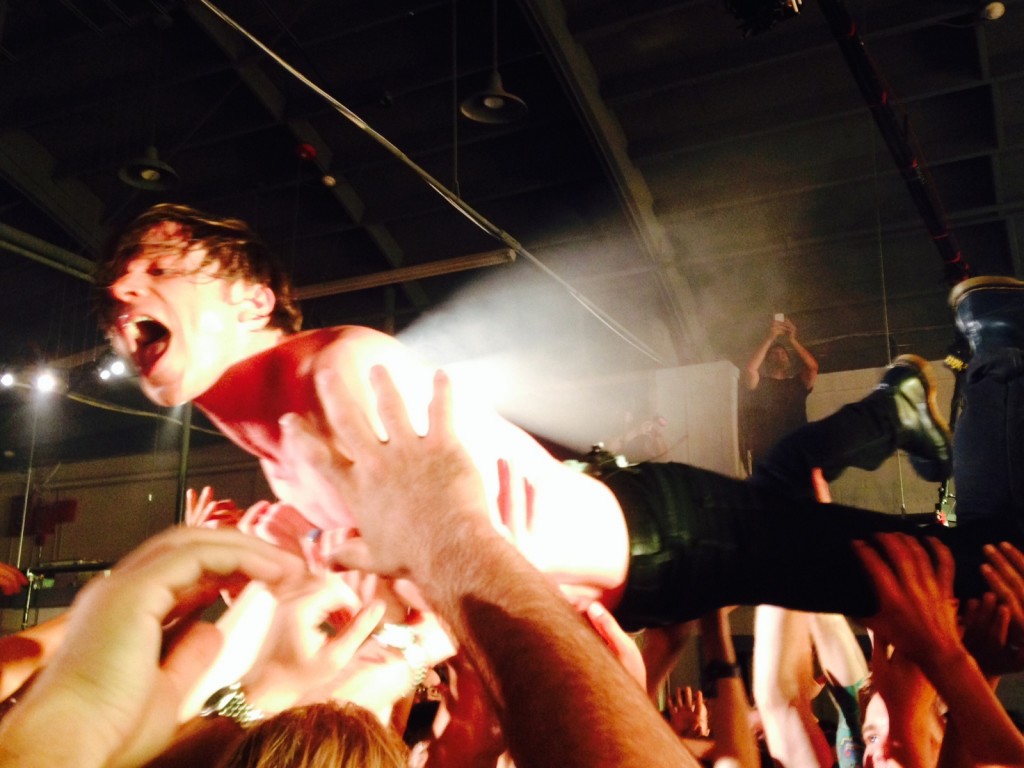 On Wednesday Oct. 15, Cage the Elephant defined themselves as the performance band of our generation. Filmed at The Artists Den in the Funk Zone as part of a PBS television series, the private show was witnessed by only the select few winners of an online contest. The airplane-hangar-style ceilings of The Artists Den made the room feel spacious when, in actuality, there was only room for about 200 people, which created an intensely personal experience.

The band walked onstage after an introduction by a clean-cut TV industry man. Lead singer Matt Shultz took a relaxed moment to thank everyone for coming, showing a sincerely personal side rather than the usual punk brashness.

Granted, it didn’t take long for Shultz to shape-shift from his polite demeanor into rock ‘n’ roll maniac mode once the band kicked into their first song, “Spiderhead”. The guitar, drums and bass came in with six ripping hits; Shultz grabbed the microphone pole and banged his head on each hit as if trying to make his brains pop out his nose.

The next song was “In One Ear,” from their first album. Guitarist Brad Shultz stood up on the monitors, mouth agape and beckoning the crowd to pump up the energy with crunchy chords. Everyone in the room knew the words and sang along, echoing the truths of our time, “Another generation X/ Who somehow slipped up through the cracks /Oh they’d love to see me fall /But I’m already on my back /So it goes in one ear and right out the other…”

As the moshpit started, people’s eyes were either delighted or frightened, a distinction that separated young rock concertgoers from hip Santa Barbara socialites. To the delight of the moshers, Cage the Elephant played good old rock ‘n’ roll. When the song ended, Brad Shultz took the mic and egged the crowd on, saying, “Hey, whoever was getting rowdy in the middle over there, keep that up!”

The band proceeded to play an absolutely killer set list, one that exemplified all of their different styles and showed them at their best with songs off of all three albums: Cage the Elephant; Thank You, Happy Birthday and Melophobia. 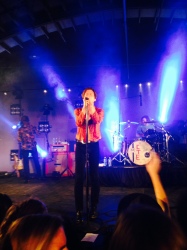 Because the performance was recorded for TV, this was a special kind of show which gave the band a space to exemplify how they have grown into true artists from their punk rock roots to both an intimate audience as well as the audience of national television. They played with depth, bringing in bright harmonies and electric stage presence.

Shultz’s moves were on point. Every jump, Jagger hip jive, kick or stare had his heart and soul bursting from the appendages. By the third song, Shultz was dripping in sweat and by the end of the show, sweat leaked from his shirt. When he held the mic up to his mouth it came off in dollops from the crease in his elbow; his bright orange paisley shirt was soaked brown and stuck to his chest. Once or twice during each song, Shultz would get really close to the audience and give a zombified stare right into each individual’s eyes, only to snap back into his wild dances.

The show was rock-steady throughout and the audience didn’t want it to end. The pit got bigger and bigger as the night went on. The band tried to end the set with their hit song, “Come a Little Closer,” off their 2013 album Melophobia.

A raging encore followed with “Shake Me Down” and “Sabertooth Tiger,” a party-punk rager song. At this point, Shultz ripped off the now-brown paisley shirt and climbed onto the crowd. They held him up by his Dr. Martens and he looked out into the audience with a mad stare, while flicking his body sweat onto the faces below him. Punk rock to the max.

The audience threw him back onstage and Shultz screamed more into the microphone. This was Cage the Elephant’s reminder to the world that, even though they play for radio, they are still rock ‘n’ roll animals at heart. Shultz took one more insane stage dive and the band ended the show with guitars feeding back into their amps.

“It’s fucking crazy what we just witnessed! Jesus Christ,” said an amped audience member. That night in the intimate space of The Artists Den, Cage the Elephant officially staked their claim in Santa Barbara as rock gods.

The location the concert was held is actually called The Santa Barbara Art Foundry, not the Artist Den. The show on PBS in which the band will air their concert is called the Artist Den, just to clarify!