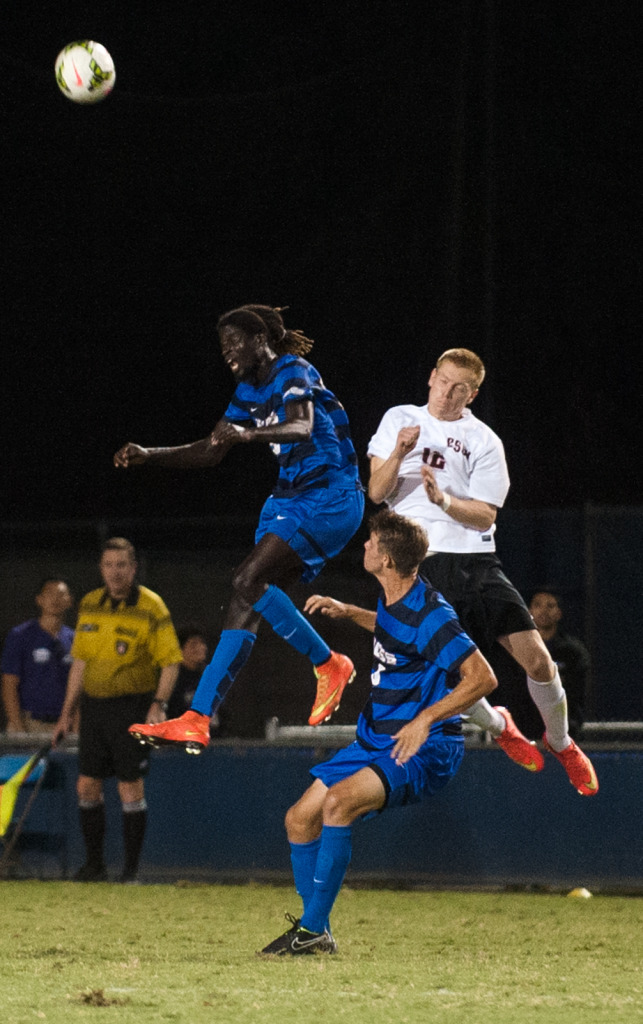 The UCSB men’s soccer team capped off a demoralizing four game road trip with a heartbreaking 1-0 overtime loss to UC Davis this past Saturday.

The loss, which was the Gauchos’ third in their last four games, dropped Santa Barbara to third place in the Big West North Division at 6-6-2 overall and 2-2-1 Big West. The Aggies now find themselves in a two-way tie for first place in the North at 8-3-3 overall and 3-1-1 in conference.

Coming into the weekend, UCSB was already at a disadvantage with injuries and suspensions forcing it to make key changes to the starting lineup. Furthermore, it didn’t help that it was facing the Big West’s number one defense in Davis, which came into the game allowing just 0.60 goals per game to opponents.

The Gauchos’ leading goalscorer in sophomore forward Nick DePuy was kept out of the lineup for Saturday’s game due to yellow card accumulation, forcing an already struggling offense to turn to backup forwards in freshman Ludwig Ahl and junior Charlie Miller. Senior right back Kevin-Garcia Lopez also missed the game due to injury.

After a scoreless first half which saw Davis outshoot the Gauchos 6-2, things got a little more difficult for UCSB when just minutes into the second half, junior center back Brandon Brockway received his second yellow card of the match, putting his team down one man for the remainder of the match.

Almost immediately after the ejection, sophomore midfielder Ismaila Jome had a chance to give the Gauchos the lead, but his curling shot from the right side of the box went inches past the far post. Jome led his team with four shots on the day.

Thanks to solid goalkeeping from freshman Brandon Berke, who had a career-high five saves in the game, UCSB was able to survive and send the game to overtime tied at 0-0.

Sophomore left back Drew Murphy provided the Gauchos with their first shot on goal since the first half in the 95th minute, but sophomore Armando Quezada was able to make his second save of the day to keep the game scoreless.

With just over three minutes remaining before Davis would have picked up an NCAA-tying ninth tie of the season, the Aggies finally ended the deadlock. A free kick from near midfield by junior midfielder Ryan Gross in the 107th minute floated into the box before finding the head of junior defender/midfielder Lucas Mohageg, who slotted it inside the left post to give his team a walk-off victory.

The goal, which gave Gross his third assist of the season, was Mohaheg’s fourth this year. Both are team-highs.

The Aggies benefited greatly from being one-man up for the majority of the game, as it outshot UCSB by a total of 15-8. UCSB, which is already struggling depth-wise on the defensive side, could be in even bigger trouble with Brockway suspended for the next game.

The Gauchos return home to play Sacramento State this Wednesday at 7:00 p.m.