The Daily Nexus
The Brew Review
Beer Lovers Converge at Pints for the Park, Drunken Happiness Ensues
October 20, 2014 at 10:00 pm by Allison Wright 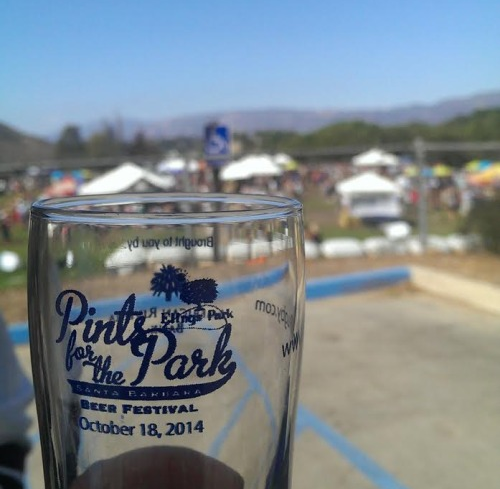 It began with a lack of Uber cars. At 11:30 a.m. on Saturday, Oct. 18, I scarfed down some preparatory carbs while shouting, “Check Lyft! Check Lyft!” in between bites. We had 30 minutes to get to Santa Barbara’s Elings Park; 30 minutes before receiving a green wristband and a tiny glass worth $54.49. After another 30 minutes, the gates would open, allowing thousands of thirsty adults to descend on the transformed rugby grounds for unlimited beer tasting. We were 11.4 miles away from our beer-sipping destiny without a single cheap cab to be found and bound to be late for the annual celebration of craft beer that drew over 25 regional and national breweries to Santa Barbara: Pints for the Park. After experimenting with trunk stowaways and cramming seven people into a vee-dub hatchback, we bribed a roommate to transport us to the festival’s locale. Tucked away off of scenic Las Positas Road, Elings Park was packed with arriving beer lovers.

After a stint of social media updating, our pack of eight eagerly requested our first mini pints. It was a balmy 74 degrees, the sun beamed on the dry, burnt hills of the park and floods of suds were on tap. I begged for an Avocado Honey Ale and prepared to get mildly loaded. As the cigar-smoking tapster handed me my three-inch-tall glass across the makeshift, wooden bar, I instantly regretted my decision. While Island’s year-round favorite was a brew I knew and enjoyed, I espied a specialty upgrade: the Avo Honey IPA. As I grimaced at my tasty, but familiar five ounces, I realized that the IPA of dreams was a mere gulp away. Within minutes, I was back to the grizzly, pot-bellied pourer. There was no judgment passed, just the empty glass and its full return. For three and half hours, I was an angel floating on clouds of foam. I was all grins and giddy skips from tent to tent and tasty sips of beers in the double digits. What follows is a review of the Santa Barbara Beer Festival’s most noteworthy tasting notes and the unfortunate flops that failed to wow the “On The Menu” crew. 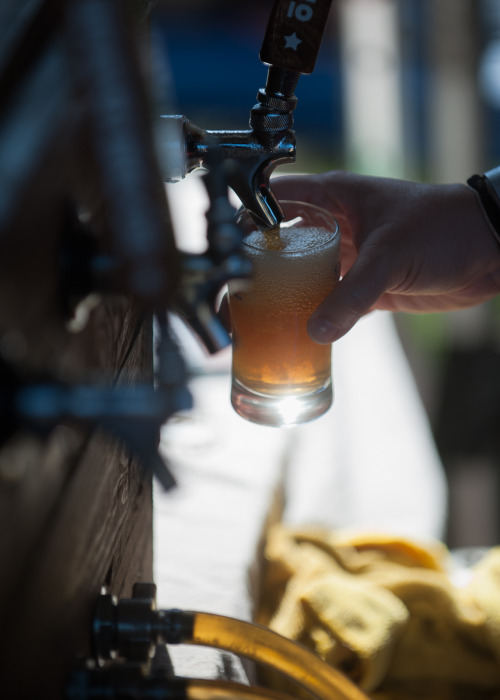 San Luis Obisbo’s Tap It quickly tapped out of their Great American Beer Festival medalist IPA but had two worthy backups. Their Amber Ale Camino hosted a malty, almost chocolaty aroma and had a slightly smoky finish. Dry and subtly sweet, it was quite tasty though it was not a wow-inducer. The Camino clearly outshined Tap It’s other pale offering. Their golden style brew was pale in both color in taste. Its subtleties were perhaps too nuanced and “pissy” for our tipsy tastebuds, but we could easily conclude its drinkability.

Santa Barbara’s own Telegraph proffered another mentionable pale. Their exceptionally adequate Cipher Key was a pleasing dark gold with piney nose, malty caramel taste and crisp, hoppy finish; at 4% ABV, it was a sessionable crowd pleaser.

Perhaps our favorite of the pales, Barrelhouse’s Pale Ryder was a delight in a pint. Surprisingly citrusy and not excessively hopped, the clear amber and khaki headed pour had more supporters than the Paso Robles based brewing company’s trad IPA. With a relaxed and balanced profile accented by mild hops and peppery rye, the unpretentious ale led me to return for seconds before the festival came to a close.

The King of Craft: IPAs

Undoubtedly, the SB Beer Fest pulled a hefty selection of worthy IPAs. With big names such as Ballast Point’s Sculpin and Firestone Walker’s Union Jack on the tasting list, I was eager to find variations on the style that has become the mainstay of the perception of craft beer.

A new face in central coast brewing circles, Poseidon, a tap-only brewery hailing from Ventura, has only been in the market since 2013. Despite their youth, their Session IPA proved mature, tasty and mellow. With a yellow body and bubbly effervescence, this “low key” brew brought the hoppy character of the west coast style without the hefty alcohol content.  Along with Poseidon, Santa Barbara’s Pure Order offered a light alternative to the excessively hopped. With a slight citrusy nose but otherwise subdued palette, this very carbonated brew could be the IPA for hop haters.

Perhaps the most innovative of the IPA options, Island Brewing Company’s Avo Honey IPA undoubtedly had us exalting its praises. With a translucent pour the colour of young wheat and a lacy white head, this beer felt light on the tongue with a slight bitterness that offered a perfect balance for the sweetness of the avocado honey. Unfortunately, Island brewed this exemplary and intriguing IPA specifically for Pints for the Park, which made OTM SOL in regards to getting another sip of the IPA before next year’s festival. 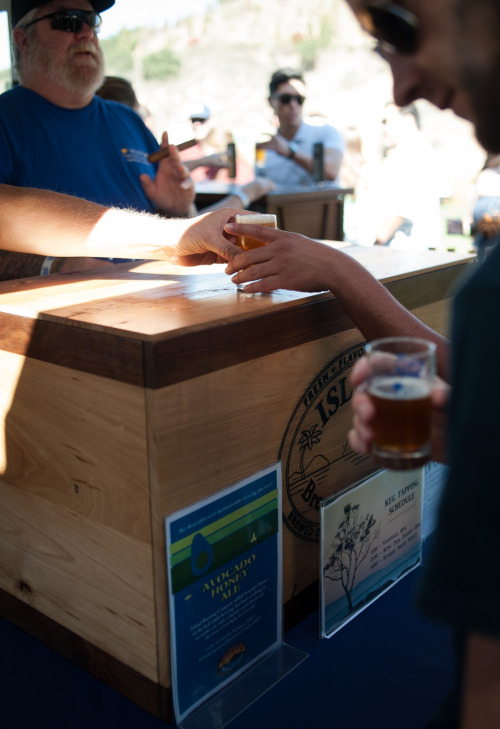 Though generally a lager eschewer, I chose not to be a pretentious “ale-head” for the weekend. The decision was not to my chagrin, as lagers can in fact be more interesting than the piss-water peddled by the likes of Anheuser Busch. Firestone Walker’s award winning hoppy pilsner Pivo exemplified the quality, cold fermented style, albeit marketing to the ale crowd.

Figueroa Mountain tapped their Red Danish Lager. Combining varying roasted and crystal malts, the resulting ruby-bronze brew pleasantly piqued my palate. While the caramel-esque beer had one taster state, “I’m not on board with this one,” I could definitively state, “I’m not bored.” And for a lager, surpassing bland standards made it worth some serious consideration. The special edition 86 Lager from Pure order also eliminated “unimaginative” from its descriptions. With a distinct, almost cider-like pear body, the brew was fresh and lacked the astringent finish typical of the style.

Island Brewing, emerging as the innovative belle of the beer ball, produced the only worthy, German-style wheat beer. Their hefeweizen style Weiss presented a bouquet of banana esters and spicy cloves. Abound with tiny bubbles rising to a latte-like foam of egg-shell white, the Weiss left an elaborate doily of foam along the sides of the glass with each sip. Somewhat tart due to citrine notes, the crisp and subtle hef was fresh for the warm weather and had me wishing for a full sized pint.

To contrast the embodiment of the hefeweizen, Shocktop presented their Banana Wheat. While I initially pondered the name, I soon realized that it was not enough like a real hefeweizen to even call it one. Emitting odors of artificial banana, the syrupy stuff had me calling out “Those bastards!” in disappointment. More like laffy taffy than a real hef, Shocktop left me wanting to shed a tear in the name of craft beer. 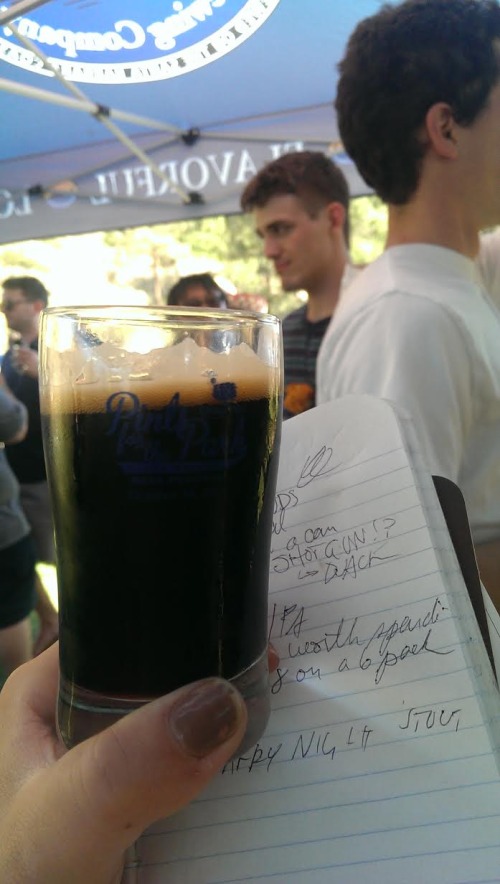 Dark was the Afternoon: Stouts

At the Sierra Nevada tent, the highly acclaimed Narwal Imperial Stout was fast to fizzle out. The popular brew had many returning for seconds and even hopeful thirds. But the near black, roasted brew was not the only stout turning heads. Island reserved its most decorated brew for last, tapping their Starry Night Stout just an hour before the festival’s close. Dark as midnight on a moonless night and coating the tongue with its silky, thick body, the stout was intensely robust with serious malt and forward coffee and chocolate notes. Immediately after, I sipped on Stone’s Coffee Milk Stout. With a deep brown, motor oil hue and percolated aroma, Stone seemed to hit the mark. But with the first sip, the straightforward brew paled in comparison to the Starry Night. Its high viscosity and lack of distinguishable subtleties made it more like high end drip coffee than the expensive espresso from Island.

In addition to its 27 breweries, the beer festival hosted multiple non-beer fermenters. Most notably, Sonoma Cider, a brand of organic fruit fermentations served as a mature competitor to cider mogul Angry Orchard. Sonoma’s basic apple brew had a clarified, light copper hue and a mature, not-too-sweet taste. Although it had a slight hint of metals on the back of the tongue, it failed to leave me in need of a toothbrush. In addition to apple, Sonoma also offered pear and bourbon variations. While the apple was an adequate cider, its bourbon version took the refined and subdued apple and combined it with a distinct bourbon nose, recalling the rolling hills of Kentucky bluegrass and aging barrels stored in crumbling quaker cottages. Its taste was well balanced and the subtle oaky afternotes provided a hint of sweetness to what would otherwise have been a rather bitter beverage. 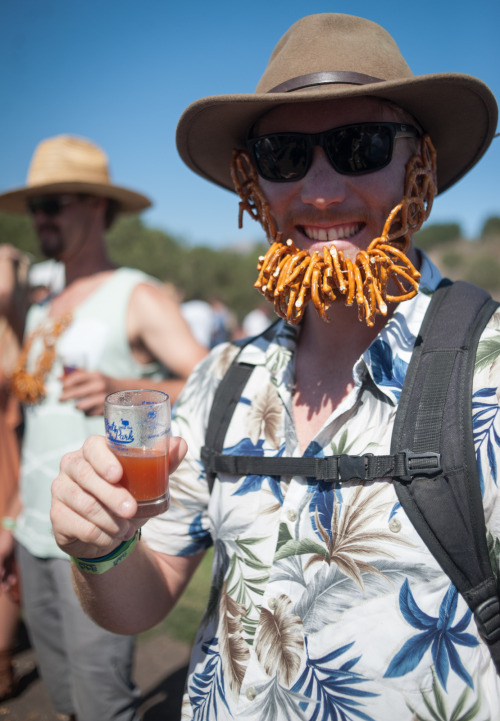 By the end of our brief stay at Elings Park, dehydrated, leaning and reddened from a combination of getting tight and getting sunburned, we had made the rounds and collectively sipped a miniature pint from each makeshift tap. After gleaning new favorite breweries, (Island and Barrelhouse), spending quality time with friends and discovering a newfound appreciation for the merit of lagers, I emerged in a happy daze. While my wings were made of foam instead of feathers, and my halo my drunken glow, I wondered how this could be anything other than beer heaven. Apparently, I was not the only one. Clad in a touristy short-sleeved button down and donning a beard crafted from a string of pretzels, San Diego native Dean Anderson humbly summed up what made Pints for the Park so divine, “The atmosphere, the music, the craft beer and the good people.” While our livers recover, we wait in anticipation for the next assembly and, until then, cheers our mini pints.

This story is a Daily Nexus exclusive.