The Daily Nexus
Opinion
A Memorial Dedicated to Jack Johnson’s Lost College Years
October 20, 2014 at 5:00 am by Ryan Soe 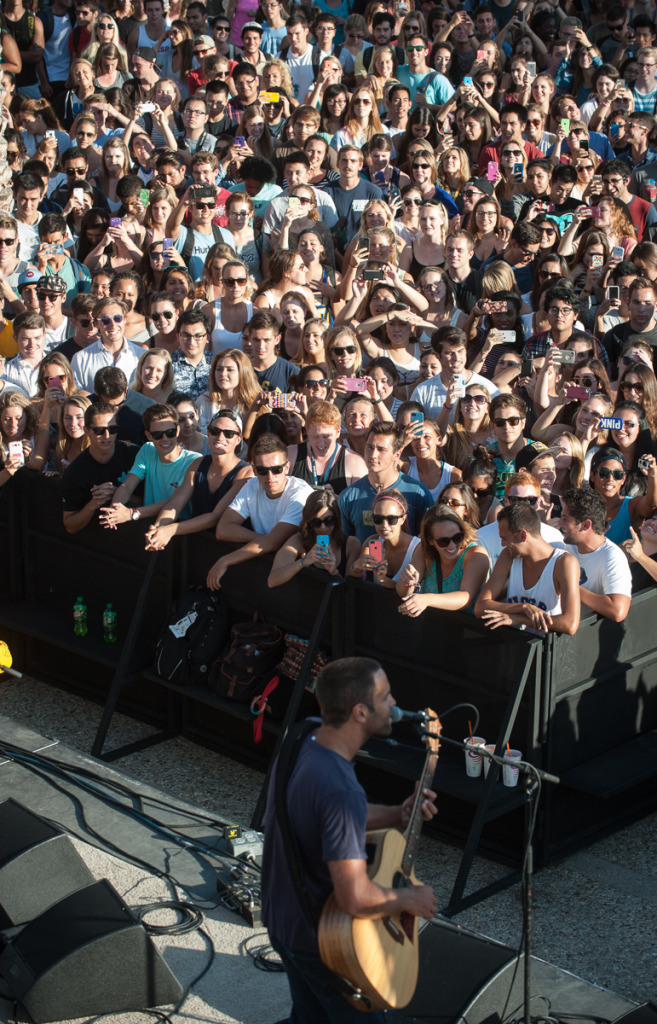 Jack Johnson performs for the student population during the Memorial Concert on October 8, 2014. Kenneth Song/Daily Nexus

Oxford Dictionary defines a memorial as an event “intended to commemorate someone or something.” Therefore, walking into the memorial that was named “Come Together” –to preach the IV community coming together– I expected something similar to the roaring, emotional crowd that filled Harder Stadium to the brim. Just a simple remembrance of the hardships we all went through last year and a reminder that we are all in this together. But everything I heard surrounding the memorial and while walking into it was: “Are you going to the Jack Johnson concert?”, “What time is Jack Johnson going on?”, “Are you sure he is going to be there?”.

Phones of all shapes and sizes emerged from pockets everywhere as Jack Johnson came onto stage. Instagram photos, Snapchats, and Facebook statues littered my social media sphere as people raved about Jack Johnson. The idea rebuilding as a community soon became an afterthought as the screams and shouts echoing off of Storke tower drowned out the moment of silence for the six victims.

Stories by Jack Johnson and his times at UCSB provided brief moments of individual happiness: how he locked his bike to the love of his life, his extension that he got by writing a song for his professor, and how the cops are still cool even after taking his guitar away. His cheerful songs and anecdotes would have been nice if they were a simple thirty minutes but the long hour and thirty minutes that he played for made it seem as if we were celebrating his life instead of the six that died the year before.

The memorial did make an attempt to speak about last year’s tragedies. A.S. President Ali Guthy talked about “what it means to be a Gaucho” and how we are “part of an extraordinary, caring family” while Vice Chancellor for Student Affairs Michael Young preached to the students about “reclaiming and rebuilding our community.” These are the values and beliefs that I expected when I heard that the “Come Together” ceremony was a memorial but these ideas were lost with the coming of Jack.

I expected something similar to the Candlelit Vigil or the Isla Vista paddle out where the community came together as one. A memorial is about people getting together to remember and celebrate as a group while a concert involves a large group of people getting together as well but rather than the collective remembrance that surrounds a memorial, concerts involve worshipping a performer to the extent that the crowd does whatever he/she says. Diplo at Extravaganza is a perfect example of this because students blindly listened to whatever Diplo wanted them to do whether it was to jump up and down or twerk till their asses fell off.

It’s not entirely his fault that the ideals of the memorial were lost because anytime a famous person does anything outcry or praise surrounds them. This makes it hard to tell if anytime a celebrity does something for publicity or just good intentions. For example, can we really understand why Angelina Jolie and Brad Pitt adopt all these different children? No, because analyzing the true intentions of a person means that you have to analyze their character, dig into their past, and try to use all these random facts to find their train of thought.

Analyzing Jack Johnson’s reason why for performing at the “Welcome Back” memorial provides even more difficulty. His performance could be considered a random act of kindness, performing at UCSB just because he wanted to for his alma mater. Random acts of kindness are hard to understand because, according to science and natural selection, we exist to survive. So why is it when a random stranger asks you for directions, asks you for a dollar to ride the bus or even just to open a door, we do it? Unless they creep you out, most of the time we will help random strangers even though we will probably never see them again.

I’m not going to lie. I’m a big fan of Jack Johnson. His catchy tunes, cheerful lyrics, and sweet guitar remain stuck in my head day after day. But I believe that if they wanted to make this an actual memorial they should not have had Jack Johnson dominate it by performing for over an hour and thirty minutes. I personally believe that his show made a mockery of the tragedy that hit and took away from the “true” meaning of this memorial.

Ryan Soe has never liked banana pancakes, anyway — they smell funny and leave a gross taste in his mouth.