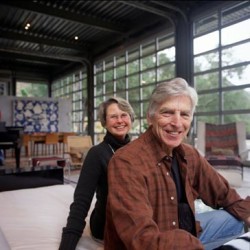 Between now and Dec. 12, UCSB’s Art, Design, and Architecture Museum (AD&A) is hosting an exhibition titled “Barton Myers: Works of Architecture and Urbanism” — a retrospective based on Myers’ 50 years of designs in architecture.

Marked with various vintage and contemporary designs, the exhibition ranges from Myer’s earliest works in 1970s to the 2010s. Some of his most well-known works include the U.S. Expo Pavilion in Seville, Spain built in 1992, a Vidal Sassoon salon and his own famous steel house in Montecito, California.

At the age of 79, Myers still commissions projects. The Dr. Phillips Center of Performing Arts in Orlando, Florida, opening soon, is just one bullet point on his resume. The Phillips Center includes a Disney Hall, the Alexis & Jim Pugh Theater and more theaters and halls to open in 2018.

With thousands of achievements and accolades under his belt, Myers is the recipient of the first Toronto Arts Award for Architecture, 2002 winner of the American Institute of Architects,  Los Angeles Chapter Gold Medaland and, most recently, a 2014 Mayback Award winner.

Born on Nov. 6, 1934 in Norvolk, Virginia, the esteemed architect grew up with architectural influences. His grandfather, remembered as one of the city’s most valued citizens, was the former governor of Norvolk.

“[My] grandfather was the city’s builder. He was the youngest mayor in my town, and made more things for the cities,” Myers said. “I think I inherited some of that DNA.”

“It’s a corny story, but my wife got tickets to hear a concert at the Rome festival. I sat there with the decision to go back business school,” said Myers. “It occurred to me there that I can make it if I can make a room like this — 3,000 people in an extraordinary setting — all these people bring[ing] architecture and art together. God, that’s better than business school.”

At Penn, Myers worked for an architect named Louis Kahn, and later left Kahn to start his own practice in Toronto, Canada. Myers relocated his company, Barton Myers & Associates, to Beverly Hills in 1984, where he is now continues to work.

He also played professor from time to time, teaching architecture at the University of Toronto and Harvard Graduate School of Design. He occasionally lectures at UCLA’s School of Architecture and Urban Design.

Myers’ designs and themes are often associated with the idea of urban integration. They speak of a city environment with a connection of buildings and homes in the same aesthetic. His disapproval of fragmentation is exemplified in his blueprints, where the buildings are built in communities rather than individual pieces.

During his career, he’s published books and journals filled with ideas of the contemporary urban room. When asked about his view of aesthetics as opposed to those of his peers, Myers explained, “Some architects are architects only. They only do buildings and they develop a brand, and you can recognize them. It’s like an Armani suit, the cut are always the same…and that’s the easy kind of archive to look at. But my practice is so diverse and so much is involved in urban planning. [It’s] called urbanism, dealing with issues in cities, [and that’s] the first part of the show.”

This past Wednesday, Oct. 15, Myers held a free walkthrough of his works for architecture lovers and students at the AD&A museum on campus. Dressed in a nautical striped sweater, bleached denim jeans, red Tom’s sandals and carrying a quilted pouch bag, he brought along his wife, Victoria, and together they thanked everyone for coming.

Kind and charming throughout the walkthrough, Myers explained the process of his designs. He began to introduce his early years in Virginia and thoroughly explained each piece of work from his history.

“I’m a Depression baby, so I came out of that period,” he said. “I’m a Virginian, [and] now I’m a Californian, but you never lose those roots”.

Myers’ long lines of works have and continue to achieve success in the world of architecture. His design styles resonate with contemporary designs, while still showcasing the long history that he studied. His retrospective is not his final legacy, but a mere indication that nothing can stop Myers from achieving his dreams.

“Architecture is so special because you make something,” Myers said. “I never thought I would be this great theater architect, building Disney Hall in Florida, [which opens] in a few weeks. That’s just awesome!”

When Myers reached the final stop on his walkthrough, he smiled with pride before leaving the architecture lovers with one last line. “I have a revolutionary spirit. I’m a missionary, I’m gonna change things, and I’m gonna die trying.”

For more information, go to museum.ucsb.edu/exhibitions.