The Daily Nexus
Sports
At a Mid-Season Crossroad
October 16, 2014 at 5:00 am by Michael Jorgenson 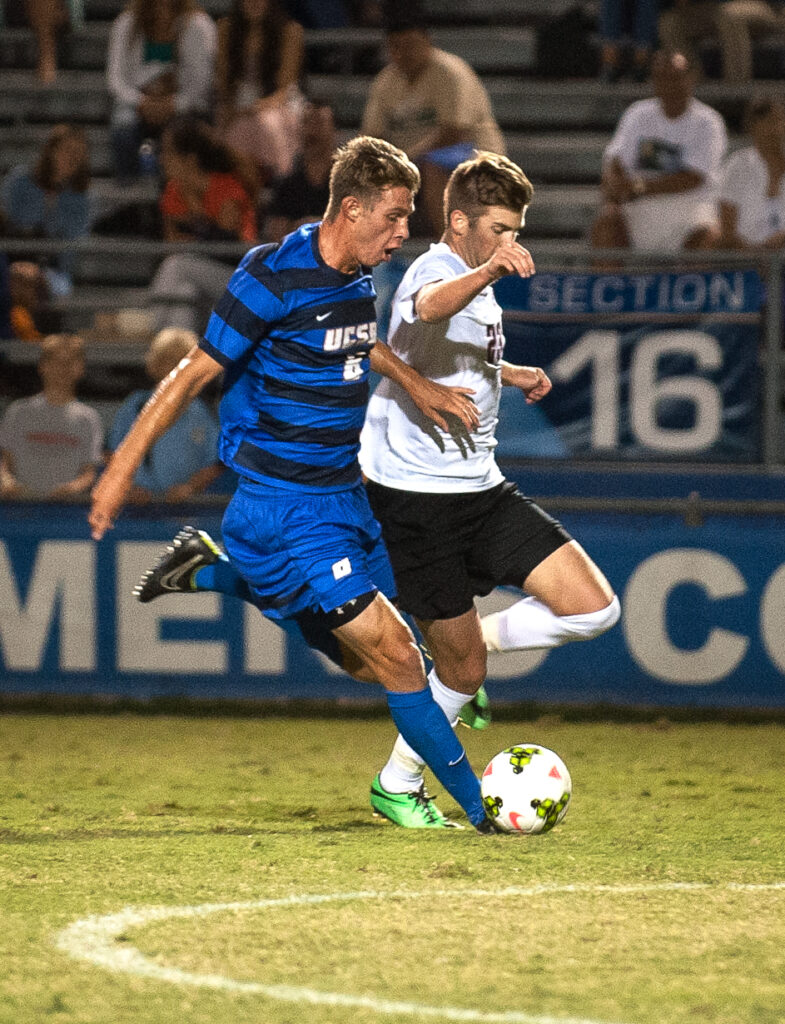 After going winless in its last three outings, the UCSB men’s soccer team finishes up a stretch of four-straight road games when it travels to play UC Davis this Saturday.

Despite their recent slump, the Gauchos are still in a good position in the Big West North Division, currently in a three-way tie for first place at 2-1-1 in conference games and 6-5-2 overall. Davis enters the weekend in that same three-way tie at 2-1-1 Big West and 4-1-8 overall.

“We need to move on from this last week in general,” sophomore left back Drew Murphy said. “If we can get that out of our system and believe again, we should be winning these games.”

Things seemed to be going perfect for the Gauchos at the beginning of the Big West season, but they have failed to win a game since their upset win over No. 5 UC Irvine almost two weeks ago.

UCSB’s disappointing results lately have been attributed to several issues. When the Gauchos have played away from home, opposing teams have flustered them with gameplans centered around sending hopeful long balls into the box, substituting constantly and fouling to keep them from trapping and passing the way they want to.

The most impactful issue for UCSB, though, has been the utter decimation of its defense.

Key defensive starters in Murphy and senior right back Kevin-Garcia Lopez have been hampered by injuries, with Garcia-Lopez slated to miss the next two weeks. Sophomore captain Paul Ehmann has officially left the team to return to Germany, leaving a gaping hole for the Gauchos to fill in their back line. Additionally, freshman Jeff Quezada and junior Dylan Murphy missed over a full game each after being red carded two games ago.

“It’s been kind of crazy the last couple weeks with Paul leaving and suspensions and injuries, but at the end of the day it’s not acceptable to be bleeding goals like we have been,” Murphy said. “It’s on us to step up and take ownership. It’s not a problem that’s solved overnight but we’ve got to figure it out quick.”

The Gauchos’ current streak of three straight without a win has been accompanied by their worst offensive slump this year, with the team having scored just one goal during that stretch. Ending that slump could be difficult this weekend against the Big West’s number one defense in Davis, which gives up just 0.60 goals per game to opposing teams. To make matters worse, leading goal scorer sophomore forward Nick DePuy will miss the game due to yellow card accumulation after being booked for the fifth time this season against LMU on Tuesday.

“We have to defend better. We have to find somebody on the field that can find us a goal,” Head Coach Tim Vom Steeg said. “It’s the same thing that we did when we won four games in a row. Again, right now, it’s all about our defense.”

Luckily for UCSB, Davis has struggled recently, mirroring the Gauchos with just one goal in its last three outings. Junior midfielder Lucas Mohageg leads the way with three goals, but the Aggies have not been particularly dangerous on offense all season, averaging just one goal per game as a team.

“Davis is a tough place to play and it’s not a very pretty game. We’ve just got to instill some self-belief again and go along those lines,” Murphy said. “It’s not about the opponent, it’s all within ourselves at the moment.”

If the Gauchos can find a way to win against Davis, it would be their first Big West road win since they defeated the same Aggies last October in a thrilling 3-2 double overtime victory. However, according to Vom Steeg, they will need to stay strong mentally in order to overcome the recent setbacks that have plagued them.

The game is set to kickoff at 3:00 p.m. this Saturday at Aggie Soccer Field.