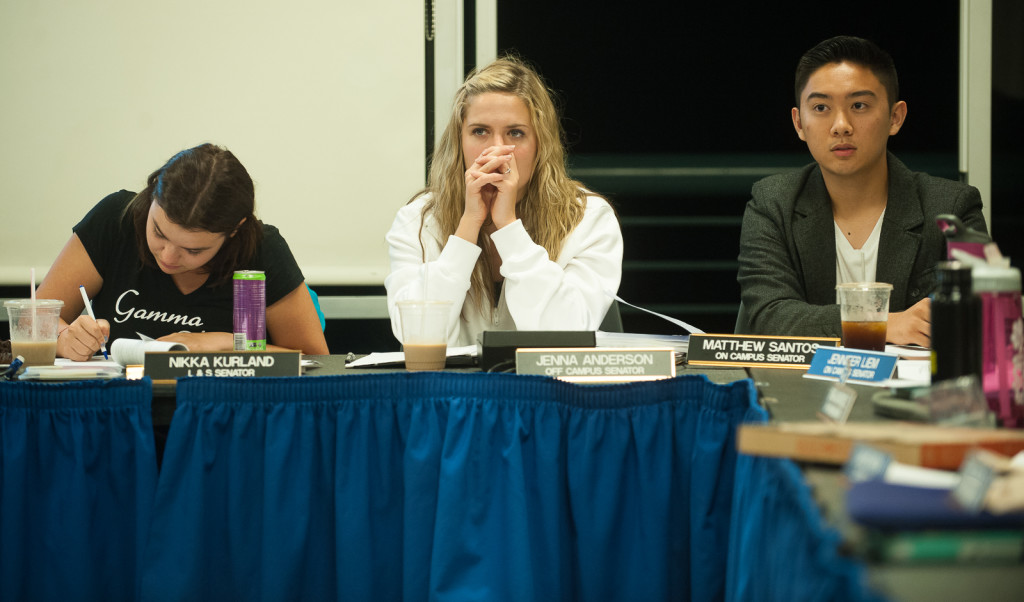 The Associated Students Senate held their second meeting of the year in the Flying A room at the UCen this Wednesday and discussed a variety of issues related to student access to the Rec Cen, the A.S. Food Bank and the Coastal Fund program, among others.

Third-year film & media studies major and head lifeguard for the Department of Recreation Montana MacLachlan said the Office of Student Life clubs have recently complained about the $7 per hour fee currently in place to use rooms in Rob Gym. According to MacLachlan, there has been damage to Rob Gym’s facilities from tap dancing shoes, as well fire hazards due to the amount of fliers on the walls.

“They said they did not raise any prices at all, and groups always had to pay $7. This fee covers nightly supervisors and general upkeep for the rooms,” MacLachlan said, “They also said they’re making every effort to treat each group equally, that they have never flat-out denied any group access to the facility.”

According to MacLachlan, OSL groups will likely be required to provide certificates of insurance, while some groups such as the Cotillion Dance clubs may be held through Leisure Review instead.

“The RecCen is just putting in all these policies to protect the facilities,” MacLachlan said.

Staff supervisor and advisor Tuyen Nguyen and A.S. Food Bank Chair Katie Freeze said the Food Bank has also has problems getting space for its operations.

“We are servicing now over 2,000 students this year, as well as other things. A couple complications that comes into it with all of these missions is that our quality of service is decreasing because we are having a lack of space,” Tuyen said. “We’re not able to create a comfortable environment for students as they’re walking through. Especially students who are already experiencing stress levels as it is.”

Tuyen also said the lack of space and lack of funds are the two major issues that the A.S. Food Bank hopes to address in order to continue servicing students.

“Hunger is just a byproduct of larger issues that folks are dealing with,” Tuyen said. “On our website, we provide resources for folks, from financial, to academic to whatever it might be for folks as they are coming through.”

“The past fifteen years, we’ve been an organization that has had catered food at our meetings, which has been really nice,” Bisson said. “We’ve taken that responsibility mindfully by ensuring that we are very environmental because we are a green bill certified organization.”

According to Bisson, the Coastal Fund meets a maximum of 24 times a year, which corresponds to $150 maximum per meal. Bisson asked the Senate if they could allocate $3,600 of their yearly budget to help pay for food at their meetings.

“Out of our yearly budget of $434,000, this represents less than 1 percent of our total budget,” Bisson said. “We’re asking to use this money to make it more convenient for our meetings so we’re more intellectually engaged. A lot of us are in school and it’s hard with classes and everything to get food on time.”

Other topics discussed at the meeting included increasing students’ knowledge about pushing through Prop. 47, which reduces prison sentences for certain crimes, and Lobby Corps’ upcoming decision about installing a three-rail fence with black chain mesh around the county bluff.