The Daily Nexus
Reviews
Aladdin Café: Garlic, Hummus and Humility at IV’s Newest Eatery
October 15, 2014 at 5:00 am by Allison Wright 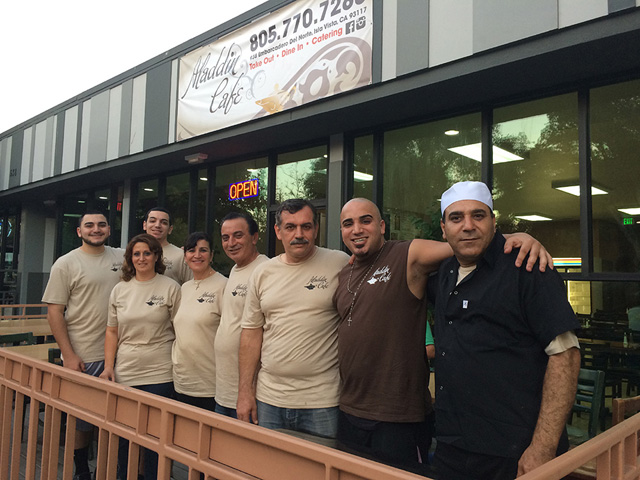 The most recent addition to Isla Vista’s food-scape, Aladdin Café, welcomed its first customers on Oct. 6. Five days later, after a night of passing around a handle of Fireball, four fellow foodies and I made a beeline to the new café. Despite approaching the closing hour, the staff warmly welcomed our quintet as we entered the fluorescent-lit building between Woodstock’s and Cajé at just past 1:30 a.m. We stared at the menu with its offerings of shawarma, falafel, meza classics such as baba ghanoush and kibbah and even breakfast options comprising only half of its choices.

“So do you like spicy?” The man behind the counter crossed his bare arms like a triumphant author on the back cover of a novel. In a sleeveless tee with the Aladdin Café’s logo and a silver rosary hanging from his neck, owner Sarkis “Sako” Abdulhai passed a plastic spoon topped with a scoop of thick white sauce across the tablet register.

“What exactly am I looking at?” I asked, turning the utensil in my fingers and taking a closer look. I didn’t need to inspect for long; the smell wafted from the tester and I thanked the supernatural that I was free from vampirism. 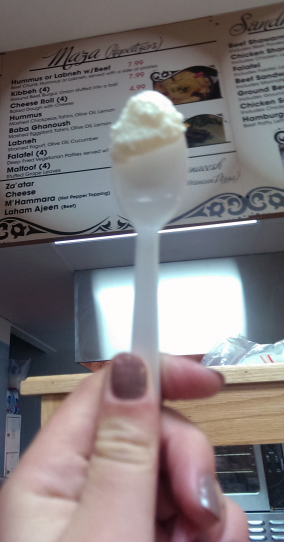 “Specially made garlic sauce!” Sako exclaimed. With an inkling of incredulity and a hesitant glance at the beaming restaurateur, I shoved the sample in my mouth. My need for the piquant was instantly pacified. With lips puckered and sinuses painfully cleared, I gave a shut-eyed grin.

“I think I just consumed a clove of raw garlic!” I spluttered. This sauce was the wasabi of Mediterranean cuisine. As I would soon learn, garlic reigns at the Aladdin.

As a group, we selected a wide array from the relatively expansive menu. The first item to arrive at our unpretentious table was the popular appetizer hummus. The lightly-colored tahini-and-chickpea dish hosted a light sprinkling of bright tomatoes and a bit of olive oil. Served with warmed, white pita bread, the hummus was smooth and velvety, with just the right proportion of acidity and saltiness. At $4.99, a one-off price steeply exceeding the Trader Joe’s standard, the Aladdin may push its luck. Despite the cost, the quality of the savory spread exceeded my expectations.

With the addition of a plate of cheese manaeesh, a braided, stuffed pastry topped with sesame seeds, we furthered the life of the hummus. Tearing off strips of the “Mediterranean pizza,” we combined the flavors of mild, white cheese with the garlicky creaminess of hummus. Unlike an American-style pizza, the pastry was light, airy and delectably buttery. And all priced under $4, the Aladdin Café’s selection of foot-long manaeesh, (from herby za’atar to spiced beef), is a bastion of filling and inexpensive.

The garlic returned when Sako delivered a plate of American-style crinkle cut fries, complete with both ketchup and the infamous sauce. Undeterred by my previous mouth-douse of the stuff, I dipped the fat, fried potato into both condiments. While by no means an example of exquisite fries, the Aladdin’s offerings are slightly crisp with a hot mashed potato center and revealed Sako’s business smarts. While the rest of his menu adheres to traditional recipes collected from Lebanese, Jordanian and Syrian traditions, the owner insists on the drunk favorite. Despite its harsh and lasting bite, the Mediterranean garlic sauce made for a delectably indulgent addition to an American classic. 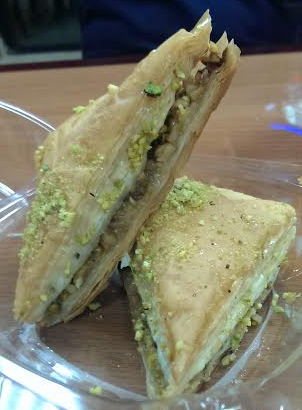 The real test arrived a few minutes later. Two shawarma sandwiches, ensconced in warm foil on immaculate white platters and emitting the meaty aromas of chicken and beef, were placed before us. Combining seasoned meat, lettuce, garlic sauce and an assortment of pickled vegetables, these pita sandwiches are not for the faint of taste. The chicken produced a drool-inducing aroma of spicy cloves, which calmed the fresh and stimulating garlic. As far as shawarma goes, the Aladdin’s fell just short of sublime. Still tasty and satisfying, the wrap is reasonably priced for an Isla Vista entree.

We finished off the late night meal well past the establishment’s 2 a.m. closing with a flakey, pistachio baklava and a chat with Sako. “There’s nothing like this here … I want to bring a taste of Mediterranean into I.V., to bring a better image of Middle Eastern culture,” he proclaimed, alert and energized despite the late night in the kitchen.

With a passion for food, family and a love of his Syrian heritage, Sako lights up the restaurant. While the dishes he serves fit the Mediterranean bill and are a welcome and diverse addition to I.V.’s pizza and burrito scene, they could not be nearly as satisfying without the amiable and enthusiastic man behind the counter.