The Daily Nexus
News
I.V. Discusses Self-Governance
October 9, 2014 at 5:00 am by Lannhu Khuat and Ava Talehakimi 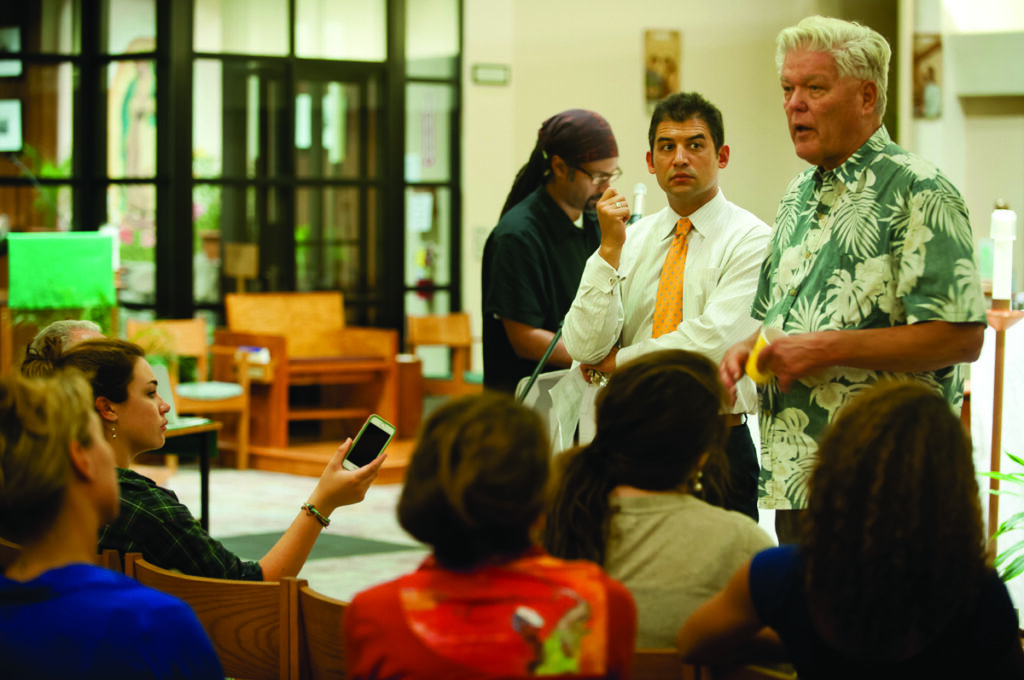 Titled “Our Isla Vista: Self-Governance Town Hall,” the meeting was the second such meeting organized by Associated Students to debate different options that would allow I.V. residents to determine certain aspects of the community’s future in the wake of the many tumultuous events that occurred earlier this year. After a brief introduction by the Fund for Santa Barbara Executive Director Geoff Green, attendees were split into three groups to discuss the most prominent self-governance models.

Fourth-year political science and pyschology double major Cameron Schunk and recent alumnus and former A.S. President Jonathan Abboud discussed the option to form a Community Services District (CSD), which would absorb the I.V. Recreation and Park District and County Service Area No. 31 and provide a number of services potentially funded through a utility users tax. Meanwhile, I.V. Recreation and Park District Board (IVRPD) member Pegeen Soutar and IVRPD General Manager Rodney Gould presented their proposal for a Municipal Advisory Council (MAC), in which I.V. representatives would either be elected or appointed in order to make recommendations to county administrators that would serve I.V.’s best intrests. Lastly, State Assemblymember Das Williams covered the options to incorporate I.V. as a city, have it annexed by another nearby city and any other recommendations.

According to Abboud, although additional taxes may not be popular with everyone, they are the only way to afford essential services.

“I think we need a government structure that has ‘T’ a.k.a. taxes. I know ‘taxes’ is always a scary word in America, but taxes are the only way we can pay for things together. I can’t buy a sidewalk, but the CSD can buy a sidewalk for everybody,” Abboud said.

According to Abboud, the CSD would be led by a board of directors voted in by residents of the district, with each member coming from a different area in order to adequately represent everyone. He explained that managing a small community requires the help of people whose priorities lie in Isla Vista with its needs in mind.

“A government that has general scope can be where people go to get funding, to get collaboration, to get support and I think that’s going to be the big engine that will be a way for a local government structure to support what people are doing in Isla Vista,” Abboud said.

According to Doreen Farr, Third District Supervisor of Isla Vista, Santa Ynez and Goleta, a major concern of I.V. citizens is its infrastructure and amenities.

Jay Freeman, a local business owner, community organizer and alumnus of the College of Creative Studies also known by his pseudonym “Saurik,” agreed with Farr but said residents need to have the ability to affect the community on a policy level in order to make a positive difference.

“A lot of these issues that were brought up at the beginning of the meeting, things like renting, leasing and property owners and issues like those, can only be fixed if we have the ability to change the rules and change the laws that we operate under,” Freeman said. “All these things require rule changes.”

Freeman said with this in mind, a CSD or MAC would not go far enough in offering citizens administrative control, arguing that cityhood is the best option.

“I think the problem is that when something happens in I.V., a lot of students don’t show up to county meetings. We need to get a lot more student input on the major decisions that happened here,” Singh said. “The biggest thing is having stronger local lobbying.”

Singh also said past failures to establish self-governance resulted from the fact that students live in a transitory phase in which they are short-term residents of Isla Vista, and thus lack the long-term commitment to improving the community.

“I think that’s why we haven’t really seen as much progress as I wish we could have, just because most of the people who live here only stay here for a few years and then move on,” Singh said.

According to UC Police Department Lieutenant Mark Signa, despite the large range of differing opinions, the meeting was a success due to its display of increased involvement from residents.

Signa said that although the Town Hall was not a solution in itself, the tragic events that took place last year have instilled a greater need for local participation in repairing Isla Vista.

“What I see is a starting point,” Signa said. “We have a long ways to go, but I think it’s a great opportunity for the community to come together. Isla Vista needs that right now. After last year, we definitely need to come together as a community.”

After the presentations concluded, attendees were asked to vote on their first and second choices for self-governance options, with the CSD gaining a heavy majority followed by the MAC.

Although Williams spoke about cityhood and annexation, he said he personally preferred either the CSD or MAC option, but said which one does not matter provided it represents a large majority of what I.V. residents want. Singh said the first step to progress is convincing opposing sides to work together and recognize that Isla Vista needs a collaborative effort in creating self-governance.

“Nobody really knows who’s supposed to be responsible for what,” Singh said. “Everyone has their own interest, and it’s about finding a common ground and agreement. I’m sure students want one thing and property owners want something else.”

Signa said the community must come together to fix its wounds and agree upon a solution that will provide long-term improvements, not only in terms of funding and services but also by maintaining a healthy communication between various groups such as students and law enforcement.

“It’s really important that the community come together and realize that those issues are here and we’ve got to come up with solutions that come from the community,” Signa said. “Law enforcement is just a band-aid.”

Why do we keep having these Concerned Citizens meetings in religious places of worship? We have an entire school from which to select rooms. Many of these meetings have been in places where some segments of the population aren’t even allowed.