The Daily Nexus
Science & Tech
Adding Mathematics to the Biological Equation
October 9, 2014 at 5:00 am by James Perez 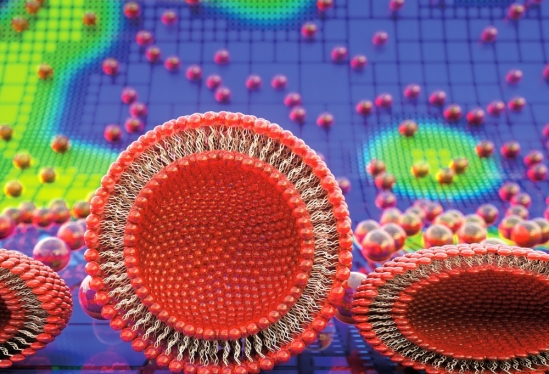 Mathematics can be used to express a variety of phenomena; a masterful Mozart sonata, for example, can be represented as an elaborate sequence of longitudinal pressure waves or acoustic wave functions; the flowering of an artichoke leaf conforms to a pattern known as a Fibonacci sequence. In addition to predictably describing sound and other physical properties of our universe, however, mathematics can provide novel insight into biological conundrums otherwise inaccessible by experimental instrumentation.

Paul J. Atzberger, a UC Santa Barbara mathematics and mechanical engineering professor, recently co-authored a series of publications developing numerical methods for describing fluid dynamics and particle diffusion within lipid bilayers. These double-layered structures envelop cells into active biochemical compartments, insulating the turbulent inner chemistry of the cell and regulating the entry of foreign substances from the surrounding environment.
According to Atzberger, computer-generated models fill in the missing pieces of human computation.

“Recently there has been this trend where computation is serving as a bridge between theoretical methods and what the experimentalists do,” Atzberger said. “Overall, mathematics can play an important role in providing a new language or set of tools that can be used either to understand experimental data or to perform simulations that provide further insight into theory that you cannot derive by pen and paper calculations.”

In a recent Proceedings of the National Academy of Sciences (PNAS) publication, Professor Atzberger and graduate student Jon Karl Sigurdsson worked in collaboration with experimentalists Patricia Bassereau and David Lacoste at the Institut Curie in Paris to mathematically characterize protein diffusion within the viscous membrane of cells. Understanding this mechanism is critically important in cell biology, where features of the membrane and their effects on diffusivity have downstream implications on many cellular processes.

Existing models of diffusivity stage protein-membrane interactions as a cylindrical shells buoying across a two-dimensional fluid. Consequentially, this approximation only accounts for protein size and the surrounding bulk flow on the overall rate of diffusivity. Interestingly, however, it has been suspected that the local membrane deformation induced by protein shape may factor overall into the ways it can move through the bilayer.

“If the protein diffusion depended upon these additional geometric factors that are not included in classical models, you should see a difference between proteins which are inducing some kind of local curvature versus proteins that are not,” Atzberger said.

In order to test the hypothesis, the experimenters used a technique known as micropipette aspiration in order to tug on a membrane vesicle, producing a tension across the immobilized bilayer. In order to analyze the effect on diffusivity, proteins were subjected to single molecule tracking and pegged with quantum dots, a sort of sticky fluorescent marker

The group found that, in the case of proteins not conforming to the idealized cylindrical shape, diffusivity changed as a function of the tension produced on the vesicle, revealing that local membrane disruptions caused by protein shape on cannot be ignored in models predicting its trajectory.

In a follow-up paper to the published investigation, Atzberger implemented models to the quantitative data gathered by graduate student Kim Weirich in order to determine the accuracy of the picture portrayed by the experimentalists. In the original article, it was hypothesized that, once the first vesicle ruptured onto the substrate, a disk would form and drive expansion of the membrane via a sticky-edge mechanism.

“What we found is that the story was a lot more subtle, and it seemed that you needed a critical concentration of vesicles even before you had an initial rupture event,” Atzberger said. “You did not just get one big island growing, but rather a multitude of small islands that grow and then merge in parallel.”

Atzberger and his team plan to continue investigating how the deformation of lipid bilayers by proteins affects protein diffusion and characteristics, as well as investigating other biological trends using mathematical models.

A version of this story appeared on page 21 of Thursday, October 9, 2014’s print edition of the Daily Nexus.