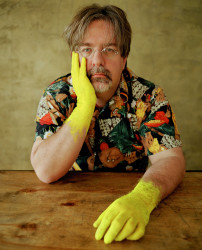 In preparation for his upcoming Arts & Lectures talk, “Love, Hate & Comics: The Friendship That Would Not Die” with Lynda Barry, “The Simpsons” and “Futurama” creator Matt Groening spoke to the Daily Nexus about his early life as a struggling artist, his work as a cartoonist and his thoughts on the animation industry. As a special treat for the beginning of Arts & Lectures’ 2014-2015 lineup, students can receive their ticket free today and tomorrow between 10 a.m. and 4 p.m. The talk will take place on Friday, October 10 at Arlington Theater.

DN: So first off, what can you tell us about the lecture you’ll be doing here with Lynda Barry?

MG: In a way, it’s not really a lecture. … This conversation that we’re doing is an extension of what we did in college, which was a combination of creative work and playing around. We’re going to talk about ideas and biographical stuff, but also there will be some surprises. Lynda will surprise me with some of the things she says, I will surprise her and you’ll be able to tell. It’ll be fun.

DN: Everyone knows you for what you did after “The Simpsons” became famous. What did you do that led up to that point? For instance, what were you doing while you were in college?

MG: I went to a college in the 1970s … called Evergreen [State College]. It was a state school that had no grades or required courses. And at the time, there was a lot of talk about progressive education and experiments in education, but most colleges that went in that direction were underfunded and were usually adjuncts of major universities. Evergreen was this brand new state-run school, and so it was a solid place with actual concrete buildings … and every creative weirdo in the Pacific Northwest ended up going there. I met a lot of life-long friends including Lynda Barry who I am lecturing with. … I ended up working at the school newspaper called the Cooper Point Journal, and I wrote for it and did cartoons for it and I became editor. … And then I started printing a lot of other cartoons as well. I just liked the medium. And that’s how I met Lynda Barry and another cartoonist who became fairly prominent, Charles Burns.

DN: Do you think that kind of system without grades worked?

MG: The history of growing up is authorities telling you you’re doing it wrong and unless you buckle down and follow the rules you’re throwing your life away. And I think virtually every generation believed it until the counterculture at the time. I was part of a culture that just didn’t believe it — one that was willing to take a chance. So if you went to a school like Evergreen, you weren’t doing it to get a credential. … First of all, every adult said that I was throwing my life away and my degree would be useless. And I suppose if I had to get a job based on a credential it probably wouldn’t have been that great.

DN: What did you do after graduation before you starting working on “The Simpsons?”

MG: Well I moved to Los Angeles after graduating and was just lost for a while. I had some friends who all had great aspirations and I noticed what we all had in common were really good excuses for why we weren’t making it. I mean, they were really good excuses … and I just decided at one point I wasn’t going to allow those excuses to define me. I was inspired very much by … a Talking Heads song on the [More Songs About Buildings and Food] album … called “Artists Only” and it’s just a list of artists’ excuses. I mean, it really hit home to me. I said okay, I was going to do whatever it took to make it, and then maybe if I didn’t make it at least I knew I had given it my all. And it still took a few years but it was definitely a way to go.

I started drawing a comic strip called “Life in Hell,” a weekly comic strip, and the idea was sort of that it was fun to do and I didn’t think I was going to do anything with it and I ended up drawing it for 32 years. And it’s basically how my career started. And that was a lot of fun.

DN: Did you always know you wanted to be a cartoonist because it was something your father did? Or were you led to it for some other reason?

MG: I always wanted to be a writer. … It just happened to be cartoons are what took off. I still think of myself as a writer.

DN: At a certain point, “The Simpsons,” “Futurama” and “Life in Hell” were running at the same time. How much creative input were you able to have on each one?

MG: In any kind of ambitious project in animation, it is almost always a huge collaboration. … So how much creative input do I have? I don’t know, I stick my nose in wherever it’s needed. I’m going to work on “The Simpsons” a little bit today. Think I’m going to do some designs, leave notes on some designs and on the script. I’m going to write “thank you” letters to the people who have done some great work on the show. We just had our season premiere on Sunday, and I was particularly impressed by the guy that did the couch gag, a guy named Don Hertzfeldt. We, in recent years, have commissioned outside animators who we admire to do what we call the couch gag, and they just go crazy and have fun with it and this one’s probably the wildest one ever. So yeah, going to write that guy a thank you.

DN: So, you’ve worked with a lot of writers over the 26 years that “The Simpsons” has been running. Who was your favorite writer and who was the hardest to replace?

MG: I hate to [say this]. They’re all replaceable. I’m replaceable. They’re all good. Everybody’s good. The scripts are group written. There’s a name on the draft ‘cause that’s the guy who wrote the first draft. … And then everybody pitches in and tries to make it better. What “The Simpsons” changed in animation was that previously writing had … not been quite as important, and animation was almost completely aimed at children. … It turned the writing of an animated TV show into a sitcom for adults and because we weren’t animators we didn’t obey the rules of animators. In general, once a script is written, the ship sails and you’re stuck with whatever you write. What we changed in that was we rewrote and rewrote and rewrote right up until just before we go on the air. Now this system makes for good stories but it kills the animators. So that’s what we do. … Who’s my favorite writer? There’s so many good ones. … Conan O’Brien was great. John Swartzwelder, who wrote more episodes than anyone else, had a certain quirky style. … We’ve never really replaced him. He was one of the best.

DN: Now that “Life in Hell” and “Futurama” have ended, do you have any big projects you plan to work on?

MG: Well I’m always tinkering with some writing project or another. And I just do little side things, like I write introductions for books. But you know, “The Simpsons” is more than a full-time job. And it’s really fun to be able to take some time to do this little one-off appearance with Lynda. Lynda and I became really good friends in college, and the name of the lecture that we’ve given before is “The Friendship That Just Would Not Die.” … We have spoken together all over the country, and in India of all places.

DN: So obviously everyone knows you, but unfortunately a lot of people aren’t familiar with her work. Can you tell us a little bit about what she’s done?

MG: Lynda is — it’s hard to say this about your best friend — but Lynda is a genius. … She has tons of books. You really have no excuse for not knowing who she is, all you have to do is Google her, she’s all over the Internet. She’s been doing comic strips for as long as I have. … And she does these cartoon books that are completely wild and now she teaches a kind of creative writing course that is too mild to really describe what she really does. I was a guest lecturer once in her class, and it’s a change-your-life class but it’s about creative self-expression and I’m sure that will be a major component of her talk at Santa Barbara. She goes around the country and teaches this course called “Writing the Unthinkable.” And she’s brilliant, and she’s really funny. And I’ve never seen her not get a standing ovation. Part of the reason why I am doing this is I just like seeing her do her thing on stage.

DN: “The Simpsons” was partly successful because of what it did to diverge from standard practices in the industry. What changes would you like to see in cartoons today?

MG: Well I really like the fact that … television is full of animated TV shows which seem to be the personal vision of single-minded creators, and you have so many shows that don’t look like any other show, which I am very pleased by. I grew up with fairly stultifying Saturday morning cartoons … which are off the network now. It was just your weekly dose of lousy animations. And now there’s still plenty of lousy animation, but there’s also a lot of really good personal stuff, and I love it and I hope there’s more. If there’s anything I would like to see, it’s that personal vision that we see so much in TV animation come to feature animation. I mean, there’s some stuff going on, but the major studios, Pixar, DreamWorks and Disney, do brilliant fairytale stories and I think, as good as they are, there’s room for a bigger pallet.

DN: What kind of cartoons do you watch?

MG: I like “Rick and Morty” and “Bob’s Burgers” and “Adventure Time” the most, and there’s a bunch that I just check out and I go “Well if I have more time I’d definitely watch ‘Uncle Grandpa,’ … ‘The Regular Show’ and a bunch of others.” Life is short. There’s a lot to compete for your attention.

DN: Going back to those Saturday Morning Cartoons you mentioned earlier, what do you think of that programming block finally ending? Is it really the death of an old cultural standby, or has it been overblown?

MG: No, I don’t think it’s bad. No, because there’s The Cartoon Network and Nickelodeon and Disney Channel … or you can go on YouTube and see a million Warner Brothers cartoons or Mickey Mouse cartoons. You’re not confined to Saturday mornings.

This article appeared in Thursday, October 2, 2014’s print edition of the Daily Nexus.

do the spoof The Hangover couch gag of the simpsons