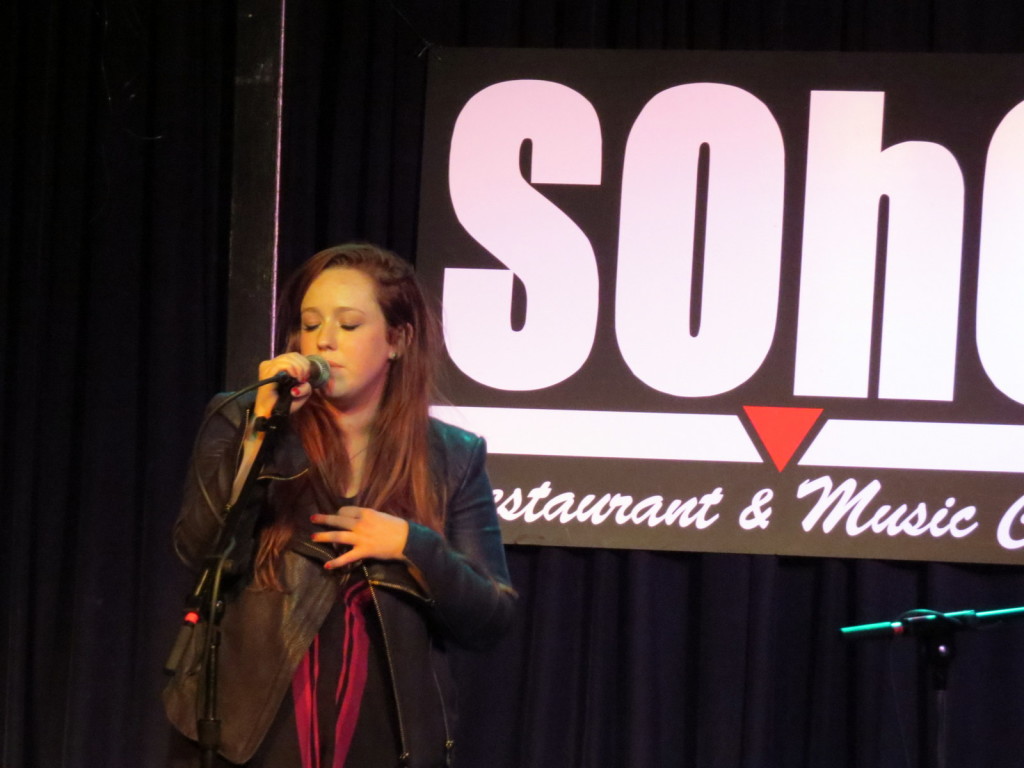 Illuminated by the soft glow of candles adorning each table in SOhO, Lily Kershaw clutched the microphone with a death grip, a look of intensity on her face as she sang her first number, “Better.” This particular song was written as a tribute to the late actor Johnny Lewis, a good friend of Kershaw’s before he became unstable following a permanent brain injury and committed homicide before jumping off a rooftop. It was an interesting choice from her fourteen-song album, Midnight in the Garden, and its melancholy lyrics immediately set the tone for her set. Last Wednesday, SOhO served as an intimate space for the L.A. songstress who left all her vulnerability onstage, along with a bottle of Fiji water and her beard-friendly, week-long guitarist/accompanist, Matt Koziol.

The night began with a pleasant surprise. I, a lowly reporter, happened to walk into the bathroom at SOhO, only to see singer-songwriter Lily Kershaw coming out of the stall, red hair aflame and head-to-toe in black. “Hi, how are you!” she exclaimed, her genial attitude wrapping me in a blanket of confused warmth since she probably had no clue who I was. “I’m good! I’m so excited to be here, it was great to talk to you last week,” I quipped, upon which her warm brown eyes lit up and she realized I was the reporter she conversed with for an hour whilst packing up for the “Like the Sun” tour she was now embarking on.

She proceeded to introduce me to her mother, a blonde beauty named Whitney, and her publicist, along with her brand-new guitarist Matt, an East Coaster whom she’d gotten to know pretty well over seven days. She picked him up for the tour since her previous band members had gone on another gig. “It’s going to be so funny in Canada, because we are staying in a house, and Matt will be the first man I’ll ever live with!” Kershaw giggled, to which her publicist retorted, “Well yeah, besides your dad!”

Saying that Kershaw is the bubbliest, most down-to-earth artist I’ve ever encountered would be a severe understatement. At 23 years old, Kershaw has had her music featured on “Criminal Minds,” won #5 on the iTunes Singer/Songwriter chart, and has befriended fellow acoustic guru Paul McDonald, so much that the two may very well form a band. And yet, she remains this kind, generous person, humble in every way. I followed her towards the stage once her opener, Taylor Berrett came on, and the two of us listened to him like a couple of fawning teenage girls. “I have never seen him play before,” she whispered. “I like him!”

Of course, who couldn’t like the lovable Berrett, whose soft folk melodies, baby-faced good looks and charismatic personality thoroughly governed the stage. He showed instrumental chops by switching from guitar to piano midway through the set, to perform “Whole Heart”, off his debut album Anchor Casting. A native to Sterling, Virginia, Berrett embodied a certain wholesome charm with his easy way at the microphone. More than a couple of times he pumped SOhO up for coming acts, saying, “This is mine and Bobby and Lily’s first show together; don’t worry, the acts get progressively better looking after me”. He offered a sincere apology to the ladies when discussing his fellow tour mate, Bobby Bazini, lamenting, “I apologize to any women with boyfriends, your relationship is about to come to a tragic end. I almost broke up with my girlfriend when I saw Bobby play; so it’s really gonna be hard for a lot of relationships. That’s the cost of art I guess.”

The talented Bobby Bazini took the stage next, dressed down in a black tee with a silver watch adorning his left wrist. Although he hails from Montreal, not a hint of Bazini’s French-Canadian accent was apparent in song. As a singer, he’s raspy and suave; a lot of soul comes out of Bazini, who crooned into the mic with one eye open. He switched guitars several times, and hit a foot drum, all whilst singing in his throaty, masculine way. Most of the tunes came from his sophomore album, Where I Belong.

When Lily Kershaw took her place onstage, the air grew intense with the singer’s vulnerability. She sang “Better”, followed by “Midnight in the Garden”, her title track. Her hand clutched the microphone forcefully, as if she needed it to hold her steady; her other hand sat in her leather jacket. Kershaw, who never plays guitar in front of people, pulled out an acoustic guitar spontaneously. “This is probably the third time I’ll play in front of an audience, and the first time I’m doing the song with Matt. This is a song called ‘Take Care’ — my grandfather passed away a couple of weeks ago, and I wrote it for him,” she said, her voice cracking.

As a whole, the performance was achingly stripped; just Kershaw’s voice and the strums of Koziol, who hadn’t learned all of her songs yet. Instead, they did cover songs the two were both familiar with. Couples leaned closer together as a Leonard Cohen number sprang sweetly from Kershaw’s lips, a love song the man had written about Janis Joplin. The choice of whether to play an Elliot Smith or Miranda Lambert tune ensued in a rock-paper-scissor competition between Kershaw and Koziol, to which Elliot won out, and “Between the Bars” was sung.

After singing “Like the Sun,” the name of her tour, she walked off the stage in a rush, leaving an ambiguity as to whether it was over yet. She returned to a slightly awkward stage to encore with the Miranda Lambert song, which lost rock-paper-scissors. “I like this one, let’s do it,” Koziol coaxed.

The song, “The House That Built Me,” secretly had Bob Dylan’s “Wagon Wheel” melded into it, and was the perfect ending to what turned out to be a very sentimental show. The L.A. singer turned to Koziol, gave him a professional handshake and left the stage.

I caught up with Kershaw afterwards, and asked her if it ever gets too emotional onstage. “Yes it does. Every single time.”

To see her upcoming tour dates or get more information about Lily, go to http://lilykershaw.com/.