As part of the editorial staff here at the Nexus, and as a graduating senior, I’m afforded the unique opportunity to write a goodbye column. Uh, yeah, that’s right, bitches; I get a whole page to myself. And if that isn’t incentive for you to join your school newspaper, I don’t know what is.

Now, if I were less selfish, I’d use this space as an homage to the people that made my past three years here so interesting/exciting/other adjective. Going that route would read something like, “To Marissa and Carissa, for being total badasses 24/7; to Tina and Robert, for conquering everything in the eleventh hour and completely owning their positions as the unsung heroes of the Nexus; to Rilla, for consistently being the little beam of sunshine that brightens the dank cave that is the Nexus office; to the news crew, for consistently killing it; to Mingchen, for perfectly capturing my slouch and my love of wine; to Kenneth, for being Kenneth, etc.”

Or I could use this space to talk about the experiences that the Nexus afforded me. I’d certainly have no shortage of material to use there — when my co-editor, Emile, and I started the job last June, we thought the biggest decision we’d have to make this year would be whether or not to cut “Ask an Atheist.” (P.S. “To Emile, who is an absolute gem of a co-worker, and who constantly gives me hope for the future of this paper and for the future of humanity. Plus, his outfits are always on point.”)(P.P.S. Sorry, atheists.)

But instead, this year really threw everything it had at our campus and at Isla Vista. I mean, really … everything. To borrow from Yeats, it seemed like, in Isla Vista, the center was no longer holding.

Ten, twenty, thirty years down the line, when I look back on my time in I.V., I will undoubtedly dwell on the horrible tragedies that have shaken our community to its core time and time again this year. It would be downright stupid to say that we could ever forget this year and move on. That will never happen … and I don’t want that to happen. Part of the healing process will be coming to terms with the fact that this is going to hurt for a long time. But along with this residual pain will come an overwhelming love for this community and a feeling of complacency with my time spent in Isla Vista, and for me, that flickering little flame of joy will emanate from the days I spent out on Santa Barbara’s high seas. And it is for that exact reason that I’m going to use this column — my final column, my big goodbye — to talk about … my raft.

Friends’ horror stories of their standard-model Costco rafts popping and collapsing in the ocean compelled my house to look elsewhere for a seaworthy vessel, and man, did we hit the jackpot. Our raft is a huge, white monstrosity … a baby beluga whale, if you will. It’s covered in blue writing that screams, “DOCK KING” in a font that I can only describe as … “douchey.” For this reason, we have affectionately named the raft C.H.A.D., a name that fits our baby both in terms of bro-ishness, and in terms of being a great acronym for “Chillin’ on a Hot-Ass Day.” (Sorry, Chads … perhaps it’s us who are the true douchebags.) And while Moby Dick might’ve been a better namesake, we now get the added bonus of being able to say, “The C.H.A.D. was great!” at the end of every floating session.

One sesh that comes to mind occurred during that notable heat wave in May … it was a perfect Friday, and from our oceanside balcony we could see a growing number of rafts heading out into the surf. After inflating C.H.A.D. with a blow dryer as quickly as humanly possible, we finally made our way down DP with the raft balanced on our heads and a cooler full of beer strung over my shoulder, picking up friends as we went. Walking down the 65-block ramp, we received our first heckle: “Oh, awkward … those girls don’t have a Costco card.” There was nothing to do but laugh … it was the kind of joke that all your friends wish they’d thought of first.

Minutes later, we were in the surf. Our ingenious decision to pack chips and salsa meant that we were immediately a big hit (if I know one thing about Isla Vistans, it’s that they love a good snack), but the bigger hit was the keg perched on top of a nearby surfboard. In fact, it is the image of some guy doing a keg stand while trying to ride out the ripples of an incoming set that will forever be my go-to memory of I.V., along with the image of the girls that dove off of their raft in order to retrieve a few cans that had got away from them, in the spirit of leaving the ocean unsullied, and the image of my friends swimming all the way from shore in order to join the fun, and the image of the nearby raft that squealed with excitement when they found out that I had a much-sought-after key tied onto my wrist (which they needed for shotgunning purposes, obviously). This was the Isla Vista that I knew and loved.

Weeks later, after an absolute tidal wave of horror and shock had washed over I.V., my friends and I decided to subscribe to the belief that the cure for anything is more saltwater — the sea, sweat or tears — and anyone who participated in the paddle-out knows this is a sure-fire remedy. So once again, we inflated the raft. This time was different, though; there weren’t thirty other rafts to greet us, nor were there kegs perched on surfboards; in fact, we were the only kids out there, save for a small dinghy that was mulling around the area. And that was eerie; it was Memorial Day weekend, a holiday that I.V. usually would’ve taken the utmost advantage of, and yet, something had undoubtedly changed. I felt pretty uneasy about the whole thing, and thought that maybe we’d made a mistake, that it was too soon to try to return to normalcy … until someone from Dolphin House called down to us.

We’re Isla Vistans … of course we wanted a beer. So with all of his might, the boy on the balcony hurled the Natty Light into the sea. It was a small token of neighborly love, but on such a heavy day, the generosity was especially welcomed. So was the dinghy driver’s generous offer to tow us away from that precarious, mid-surf 66-block rock. For the first time that weekend, we saw glimpses of the I.V. we remembered … the community that had inspired me to choose this school.

Oh,  guess I’ll tell that story as well. See, I chose this school because of a piece of roadkill. Literally. I’m not kidding. When I was 13 years old, my mom, an ’86 UCSB alum, took me back to her old stomping grounds at 6660 Sabado Tarde. When we pulled up to the house, she was pretty stoked. She said that everything was exactly as she remembered it … and then we noticed something in the road. There, in the middle of Sabado, was a dead possum sporting cheap wayfarer sunglasses and a cigarette perched between its lips. My mom shook her head and stifled a laugh.

I fell in love.

What all of this rambling is trying to grasp at is, if there’s anything that we Isla Vistans possess, and should embrace, it’s our damn good sense of humor. And my only fear is that perhaps the freshmen and sophomores have not seen enough of that laidback, lighthearted attitude; their memories of Isla Vista have been tainted by images of violence and riots. I fear that, when the time comes, they will elect to live elsewhere.

But I want to urge you youngins not to do that, because this place is heaven. It’s Bagel Café’s saving graces on a Saturday morning when you’re hungover as shit. It’s riding a beach cruiser to Sands at sunset, surfboard nestled under one arm, wetsuit halfway unzipped. It’s six of your closest friends piled onto a raft, shamelessly drinking 40s and growing tanner, blonder and happier by the minute. It’s Margarita Monday, Trivia Night on Tuesday, OTT Wednesdays, Bill’s Bus rides on Thursday and then rallying for the weekend, because as it was so beautifully put in an anonymous poem left at the memorial outside of 7-11, “we are hard-working academics and hard-drinking alchoholics.” It’s the attitude that, yeah, we’ve taken a few punches, but we’ll sure as hell get back up — it’s the fact that we’ll float on. And for an English major pursuing journalism, it’s the fact that this might’ve been last chance to realize my oceanside dreams, to wake up to whales migrating past my balcony (truly transcendental), and to march the big plastic love of my life down to the beach with six of my best friends … and I’ve cherished every second of it.

TL;DR: I love you, Isla Vista. Float on. 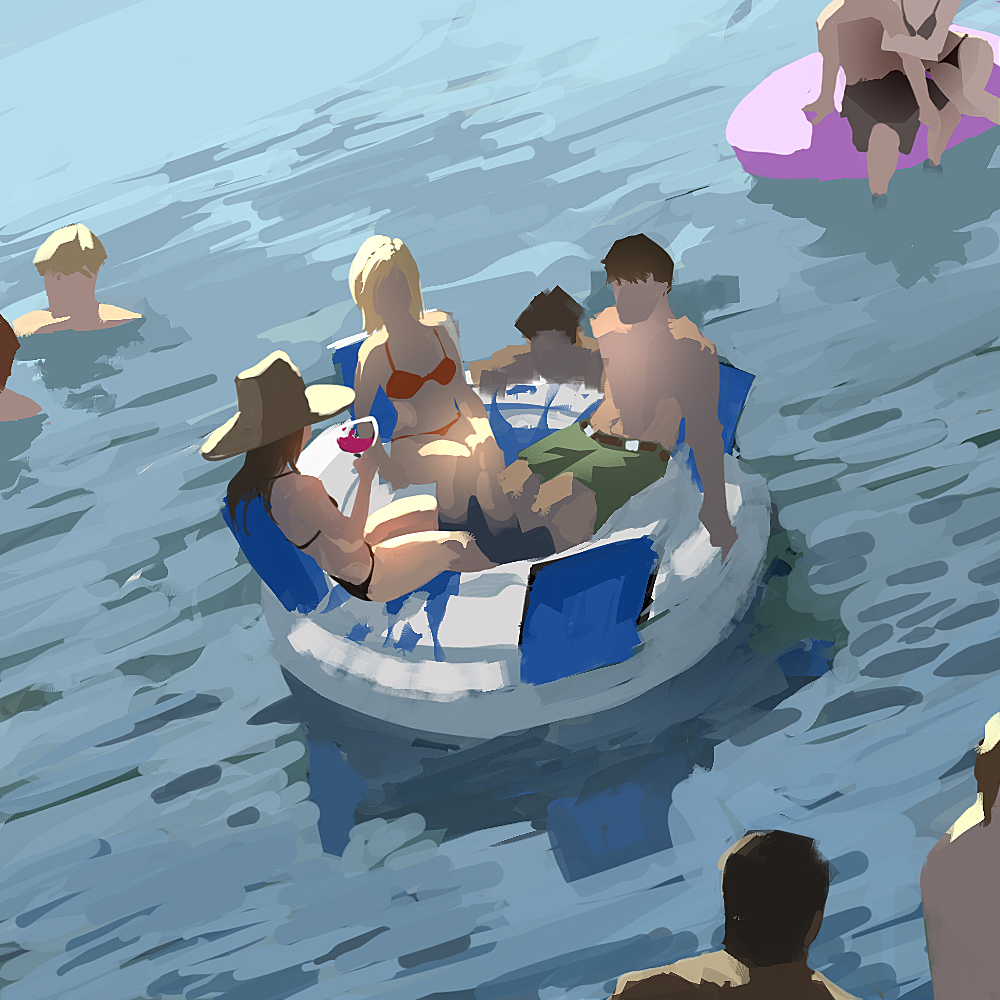 Views expressed on the Opinion page do not necessarily reflect those of the Daily Nexus or UCSB. Opinions are submitted primarily by students.
A version of this article appeared in the Thursday, June 5, 2014 print edition of the Daily Nexus.

I’m a 2000 alum (also former Nexite)… I really loved this. It brought back the wonderful things I cherished while I was at UC Isla Vista. :-) Although I never went out on a raft. Thanks for the picturesque and heartfelt writing.