Gray Whales Count, a research-based nonprofit, extended their observation period one week past the original end date to account for gray whale calves making a late migration through the Santa Barbara Channel.

From the cliffs of UCSB’s Coal Oil Point Reserve, GWC counters record the gray whale migration north from Baja California to the cooler waters of Alaska each year, February through May. The data is sent to the Annenberg Center’s Journey North, — a global study of wildlife migration and seasonal change — the National Oceanic and Atmospheric Administration’s Southwest Fisheries Science Center, Scripps Whale Acoustic Lab and Cascadia Research Collective for analysis. GWC also takes note of sea lions, dolphins, aircraft, watercraft and otters, and contributes some data to the The Otter Project. The extended Count ended yesterday, with a total of 1,038 whales traveling northward through the channel, 226 of which were calves.

A large portion of the funding for the GWC internship program has come from the UCSB Coastal Fund, an organization that seeks to protect and preserve the ocean’s ecosystem.

According to Kelsey Bisson, a board member and graduate representative of Coastal Fund, GWC internships not only provide valuable experiences to interns, but also allow for more accurate research on migrating whales.

“They are doing a great job at educating the public,” Bisson said. “It also means that they are able to put numbers on how many whales move north and south and what this means for the whale population as a whole.”

GWC project coordinator Michael H. Smith said the migration is mostly mothers and calves, and that the decision to extend data collection this year particularly reflected the movement of those calves.

“It’s different but not highly unusual,” Smith said. “We’ve had the second highest total of calves to date this year.”

Smith said GWC only observes a small percentage of the total migration. Previous GWC research indicates that 20 percent of whales navigate through the Channel while the rest go around the Channel Islands.

“The whales migrate in two phases,” Smith said. “The first phase is made up of the general population who use the swift currents of the outer islands. The second phase is mostly made up of mothers and calves that use the channel because it’s safer and provides more food opportunities.”

According to Smith, whale mothers must travel north toward Alaska shortly after giving birth to calves in Baja California. Along the way, he said, the mothers are tasked with protecting and nurturing their calves while also looking out for themselves. The exhaustive nature of the journey can cause a full grown mother to lose up to one-third of her body weight while making this treacherous 3,100 – 4,000 mile trip north.

Smith also said the nature of the migration combined with the high number of calves this year means that some will inevitably fall behind.

“It’s a tough journey, especially for the mother,” Smith said. “If separated from its mother, the calf will die.”

In order to help record data, Gray Whales Count has enlisted the help of a number of interns in addition to volunteers, some of which are students.

Jessie Richter, an intern and graduate from the University of New England, said this was her first year serving with GWC and that she hopes to work them again.

“I majored in marine biology and just want to get more involved in the major,” Richter said. 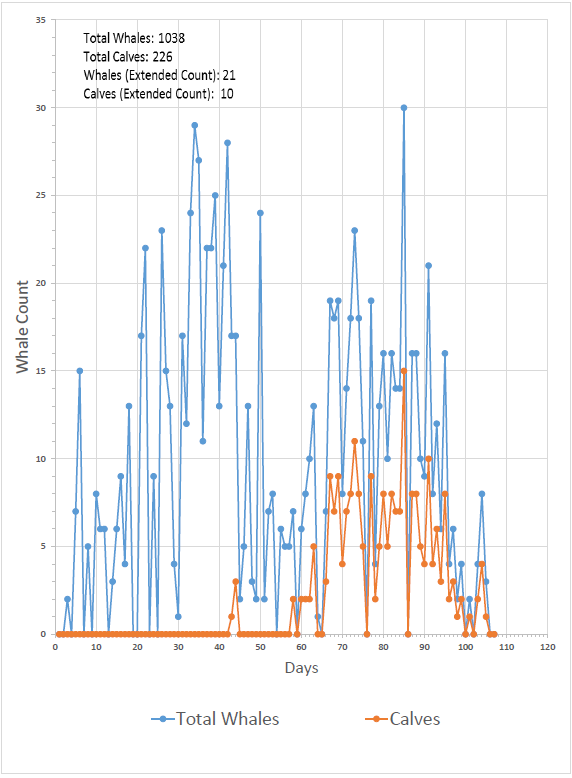 A version of this story appeared on page 5 of Wednesday, May 28 2014 print edition of the Daily Nexus.