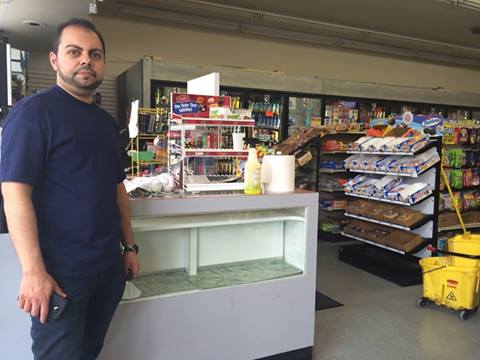 I.V. Deli Mart Owner Michael Hassan stands inside his store, in the same area where one victim was shot dead last night.

I.V. Deli Mart owner Michael Hassan gives the Nexus a breakdown of what happened last night inside his store, where one person was shot dead as part of a shooting spree throughout I.V. that left 7 dead.

Hassan said he was not working the night of the incident, but around 9:30 p.m., he received a call from his manager saying shots were fired through the Pardall Road store.

“He told me there was a drive-by shooting. So we got two hits through the glass and one person was dead,” Hassan said.

After fatally wounding the victim inside the store, the suspect — firing from a black vehicle in the street — continued to fire more rounds of gunfire, Hassan said.

“They heard two shots and everybody went down,” he said. “He shot several times after those two — probably around four or five more — and of course we called 9-11 right away and it went from there.”

As Isla Vista is left broken by the incident, Hassan said he cannot believe what took place in I.V. last night.

“It’s shocking. This is like what you see in the movies, and that’s the last thing I expect to see in I.V. or in Santa Barbara, in general – to see drive-by shootings,” Hassan said. “There is no way you would ever think that is going to happen.”

I recall reading the “Richard McBeef” script from the Virgina Tech killer, and just got done reading this guy’s thing: actually slightly *less* rambling. He knew exactly what he was doing.

Hell: I was sanding in front of those windows not 20 minutes before.

I used to go to UCSB and was just wondering if this all really happened? What about the stabbings? At least that was fake. One skinny kid stabbing all of his roommates to death? Was any of this hoax?

Your an idiot. Who makes this shit up?

it’s fake. In CA, a hazmat crew has to clean up biomedical waste and murder scenes. It’s not done with a rubbermaid mop bucket and store employees.

Just a few words to express my on going concern with mental health issues and suicide. We must remember that Elliot Rogers was a sick young man who needed help and did not receive it. As a dad who has lost a child (student at UCSB) to suicide it saddens me that just a few short months after such a tragedy we seem to forget and just move on with our live. Consider the loss of Robin Williams taking his life had a news media shelf life of two days and then we sort of forget. The only way to… Read more »