The Daily Nexus
News
Senators Amend Student Lobby, Swear in Execs
May 22, 2014 at 5:00 am by Tiana Miller-Leonard

Students identifying as members of Coalition for Survivors silently protested the last Associated Students Senate meeting for the 2013-2014 academic school year last night, during which senators passed a controversial resolution to amend the legal code for Student Lobby and turned over their positions to the new senators for the 2014-2015 school year.

The bill to update Student Lobby’s legal code included a provision that would allow the elected External Vice President of Statewide Affairs to appoint the chair, or co-director, of Student Lobby, which drew criticism from members of Student Lobby but ultimately passed. Also at the meeting, outgoing executive officers offered their reflections on the year and advice for their replacements. As of press time, new senators and executive members had not yet taken their positions.

Many members of Student Lobby said they felt the process did not take into account the requests of the group, despite acknowledging the potential for collaboration and improvement. During public forum, Student Lobby co-chair Maria Flores said she believes issues could be resolved in manner that involve more student input.

“We feel that there could be a more inclusive way to go about it,” Flores said. “We don’t negate the fact that student lobby could be changed for the better.”

Current EVPSA Alex Choate read a letter from the 2011-2012 EVPSA Ahmed Mostafa in favor of the bill, which stated that the bill would help to create a “strong coalition between Student Lobby and EVPSA.”

During A.S. President Jonathan Abboud’s report, he defended the bill on the basis that many other UC campuses function with a stronger relationship between the EVP and the Student Lobby group, and that the EVPSA had always picked the chair until two years ago. According to Abboud, the change came as a result of personal vendettas within the association, rather than necessity.

“The External Vice President used to pick the chair of Student Lobby, and then Ahmed won and they didn’t like him so they changed it,” Abboud said.

Andre Theus, author of the bill, reported to senate that Student Lobby was unhappy with its unexpected and sudden timing and requested that the bill be pulled. However, he also said he recognized some ways the bill would benefit the organization.

Second-year Student Lobby member Mohsin Mirza said he did not agree with the concept of allowing senators to significantly change a group that they were not directly involved in.

“It’s a very dangerous precedent for students to restructure something who have not been involved in this,” Mirza said.

Some Senators said they did not agree with the process of drawing up the bill, but did support the notion of creating a stronger coalition between the office of the EVPSA and Student Lobby.

Senator Nick Onyshko said there should be more consideration for the solidarity of A.S. as a whole.
“It’s a little concerning to hear rhetoric such as autonomy…when we are one association,” Onyshko said.

The bill passed with 12 votes in favor, 6 against, and 4 abstentions.

As the process of swearing in new executives began, protesters from the Coalition for Survivors silently held up signs condemning administration and campus organizations for allegedly failing to address accusations of sexual assault made by second-year global studies major Crystal Long on April 23 against incoming External Vice President of Local Affairs Beatrice Contreras.

Also at the meeting, outgoing executive officers spoke about their experiences in office and offered words of advice.

Abboud advised incoming officials and senators to treat each other with kindness, disregard party politics as much as possible, and keep overarching, long-term goals in mind.

Outgoing Internal Vice President Kyley Scarlet devoted her time to thanking the senators, her co-executives and the A.S. staff members for supporting and accompanying her throughout the year.

“Remind yourself that you’re laying down the tracks that the next generation will follow,” Moore said. “If you take yourself seriously … then you will be taken seriously.”

Choate echoed Abboud’s plea that new elected officials remain respectful of each other, and advised them to stay true to their opinions.

Outgoing Student Advocate General Kristian Whittaker said senators should make an effort to consider opposing opinions and listen to those that they disagreed with.

“Take into consideration what the opposition has to say,” Whittaker said.

Also at the meeting, senators passed a resolution opposing hydraulic fracturing, and decided to pull a bill that would have restructured the legal code for A.S. Program Board. 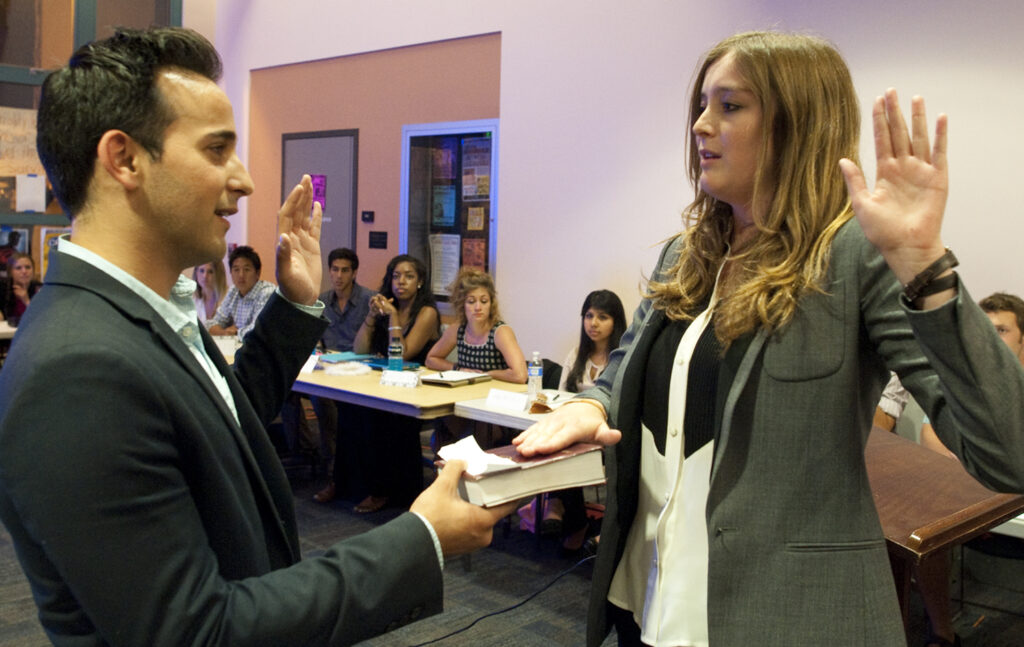 A version of this story appeared on page 3 of Thursday, May 22, 2014′s print edition of the Daily Nexus.

What kind of swearing in ceremony in this? You’re supposed to put your left hand on the Bible and raise your right hand.

Look at President Obama in this picture:

That’s not a bible because, you know, separation of church and state.