The Daily Nexus
Artsweek
Two Banjos in Paradise: The Mystifying Talent of Béla Fleck and Abigail Washburn
May 15, 2014 at 6:07 pm by Sio Tepper 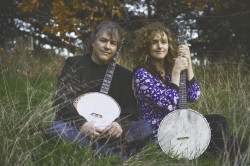 There’s something about a crowd of people that gather to see a banjo duo — some kind of eagerness or intense dedication to sharing in musical delight.

The banjo (or something a lot like it) is found in cultures all over the world, and is deeply rooted in what we think of as the sound of American folk music. So I was not surprised to find myself amidst a diverse crowd of enthusiasm and excitement last Wednesday night at Campbell Hall at a UCSB Arts & Lectures event. It was the noisiest and friendliest crowd that I have ever witnessed before at a show there.

The enthusiasm continued when Béla Fleck and Abigail Washburn came out on stage, banjos in hand. The duo was charming to say the least. They were set up very close to the front of the stage on two chairs for most of the concert, creating a very intimate setting in the relatively large hall, drawing in the audience’s keen attention.

When they started playing, it felt like returning home. I did not grow up with banjo around me, but I have spent some time at bluegrass and folk festivals in recent years. The lilt of their intertwined phrases instantaneously transported me to the sunshine and dirt of festival life.

The concert felt homey in other ways too. Béla Fleck and Abigail Washburn are married and have a one-year-old son named Juno. Their spousal dynamics on stage were both entertaining and enlivening. Collaborations can run the risk of inequality between players — someone being “better” than another, someone getting more solos than the other, etc. But there is already an inherent equality in their stage presence. It was a very familiar atmosphere that we’ve all experienced in some form. They poked fun at each other and shared stories.  One of my favorites was when Washburn spoke of a time when they were driving through the South and Fleck was speeding. He gets pulled over and the policeman, upon taking his license and registration, returns to the car and asks him, “Who is the best banjo player of all time?” Fleck replies, “Earl Scruggs,” to which the policeman says, “Right answer.”

The duo is equal in musical presence as well. They each had their own musical careers prior to their collaboration and marriage. Fleck has been nominated for more musical categories than any other musician (country, jazz, classical, bluegrass, spoken word, to name a few), and has collaborated with renowned musicians such as Yo-Yo Ma and Zakir Hussain.

Washburn has performed all over the world with various groups and has spent a considerable amount of time in China. She has won various competitions for her songwriting and has toured across North America with the group Uncle Earl.
With the kind of breadth in musical background that they each have, they are equally present in their musicality and performance. Their styles are complementary, giving rise to a very unique blend of banjo madness.

They performed a mix of originals and traditional tunes. Washburn’s powerful vocals shook up the audience with intense passion. Fleck took some solos that were intricate and lovely, with rich harmonic progressions that are often not heard on the banjo. Their collective range in different cultural styles made for a rich tapestry of sound. Washburn put some Chinese proverbs and stories to music and sang these tunes with Fleck accompanying. They also stepped forward in front of the microphones at one point and performed a tune acoustically. This was a great way to heighten the intimacy and pay homage to the American acoustic folk tradition.

It was a vibrant evening of impassioned music and rich performance. This powerhouse duo is certainly a force to be reckoned with for years to come. Hopefully someday we will see them in a banjo trio with their son, Juno.

A version of this story appeared on page 8 of May 15, 2014′s print edition of the Daily Nexus.