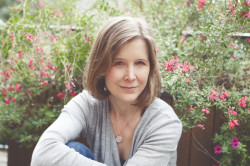 A graduate of Sarah Lawrence College and the Iowa Writers’ Workshop, Patchett has published six novels, including The Patron Saint of Liars, Bel Canto and State of Wonder. These moving, triumphant works explore how strangers behave when thrown together by circumstance and reveal grim and graceful aspects of human nature. Patchett was named one of Time’s “100 Most Influential People in the World” for 2012.

Her talk drew mostly from her latest book, This Is the Story of a Happy Marriage, a collection of essays centered on the theme of commitment in marriage, family, friendships and writing. In the book, she writes, “I may have roamed in my fiction, but this work tends to reflect a life lived close to home.”

Patchett was not the soft-spoken, introverted writer I expected after reading Truth & Beauty: A Friendship, a heart-breaking memoir about her friendship with the late Lucy Grealy, a fellow writer who battled jaw cancer for most of her life. Petite and wearing a pink ’50s style dress topped off with a warm smile, Patchett’s larger-than-life personality radiated throughout the theater.

With her energy, wit and swiftly-paced story-telling, she discussed the somewhat accidental process by which This Is the Story of a Happy Marriage came about. Later, she told how she became co-owner of Parnassus Books in Nashville, as well as an advocate for independent bookstores nationwide.

With the ease and charm of a storyteller at a table of captivated dinner guests, Patchett unfolded the tale of how a close family friend, Niki Castle, moved in after a rough time in Patchett’s life and eventually became her personal assistant.
One day Castle discovered a large plastic bin in the closet. The bin was full of magazine clippings — short articles published in magazines like Seventeen, Bridal Guide, GQ, Vogue and later on, The New York Times Magazine and the Wall Street Journal. It was the culmination of the work that supported Patchett in her early years, when she was trying to succeed as a writer.

The short pieces, some with titles like “When Your Best Friend’s a Guy,” and “How to Decorate Your Locker,” taught Patchett how to move from writing about her own personal narrative in fiction to the collective experience in non-fiction.
As stated in the first chapter of the book, she learned how to “[readjust] the slant of an article to satisfy the vision of various editors, or [spice] up the action to satisfy the attention span of the readers” — all within the confines of a word limit and deadline. Magazine writing also presented her with opportunities to travel, research and become an instant expert in fields she never would have otherwise explored.

An admirer of Patchett’s writing, Castle set herself to the task of reading through the hundreds of articles, selecting the best and passing them on to Patchett to revise and develop further. Each time an article was published, Patchett recalled, she would tear it out and toss it in the bin. It was like “shedding leaves,” she said, and shared that she never likes to dwell in the past or the future. This explains her initial reluctance when facing the bin of old writing and Castle’s vision for a book.

Around the time that This Is the Story of a Happy Marriage came together, Nashville lost its two main bookstores – Borders and Davis Kidd. The closest bookstore was now 20 minutes away without traffic. Here was Patchett’s moment of altruism, a subject she raised at the beginning of the talk.

Patchett attended Catholic school for 12 years, a mixed experience that left her with a vague sense of guilt and humility. One silver lining was recalling a nun telling her, “If you can think it — it’s your job.” There was an urgent need in the community and Patchett realized that she was the one to take that giant leap of faith and stand up against all odds.

Patchett stood against the naysayers and the general public view that real books and booksellers have gone extinct due to Amazon and e-books.

“The extent to which I did not think this through is breathtaking,” she said.
Nevertheless, she went with her gut, partnered up with publishing veteran Karen Hayes and signed her name to a check.

Parnassus Books is now a thriving cornerstone of the community with visiting authors and story-telling hours for children. But Patchett’s altruistic deed certainly came with non-financial, emotional rewards and satisfaction.

For one, now she has an excuse to hang out with all of her writer friends, such as Amy Tan, Donna Tartt and Elizabeth Gilbert. Second, she now relishes the ability to read a new book, fall in love with it and then recommend it to anyone within the “river of human beings” passing in and out of the store each day. “You have to go read Karen Joy Fowler’s We Are All Beside Ourselves,” she’ll say, “and because I’m Ann Patchett and because people are a little scared of me, they always say yes!”

This unique human interaction makes independent bookstores so valuable to communities and our individual relationships with literature. Patchett concluded the talk by emphasizing the importance of supporting one’s own local community businesses, such as the beloved Chaucer’s Books in Santa Barbara.

For all aspiring writers and artists in general, Patchett’s voice is honest, down-to-earth and incredibly inspiring. Take this last paragraph from her essay called “The Getaway Car: A Practical Memoir about Writing and Life”:
“Think of yourself as a monk walking the path to enlightenment. Think of yourself as a high school senior wanting to be a neurosurgeon. Is it possible? Yes. Is there some shortcut? Not one I’ve found. Writing is a miserable, awful business. Stay with it. It is better than anything in the world.”

A version of this story appeared on page 9 of Thursday, May 15, 2014′s print edition of the Daily Nexus.