The Daily Nexus
News
Organizations Lose Funds to Pardall Center in New Budget
May 8, 2014 at 8:39 am by Tiana Miller-Leonard 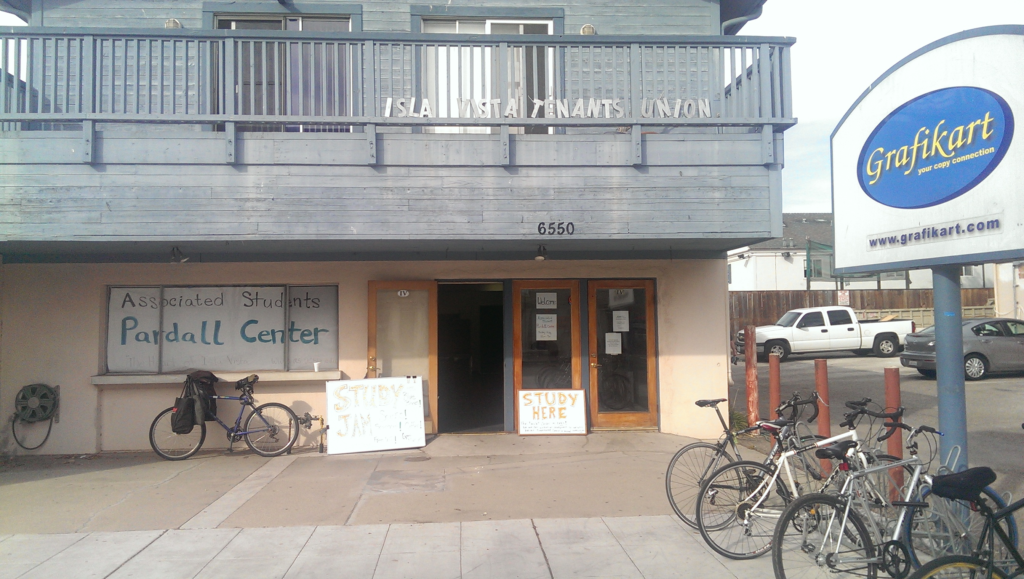 Funding for the Associated Students’ latest Isla Vista acquisition was the center of debate at last night’s meeting.

Despite opposition from campus groups, the Associated Students Senate decided to pass the budget for the 2014-2015 school year, as proposed by A.S. President Jonathan Abboud, which increased a “recharge” fee on lock-in fees that are given to specific organizations to give this money to the A.S. Pardall Center.

Abboud’s budget proposed to increase the recharge on lock-in fees — which is a percentage of the lock-in fee allocated to fund building, leadership and tech reserves — from 3.0 percent to 3.5 percent. A portion of the recharge would go toward sustaining the A.S. Pardall center, for which the association has been seeking a permanent funding source, which drew criticism from several BCCs receiving lock-in fees. Additionally, Abboud proposed a reduction in funding for staff salaries, allocating $40,000 less than requested by staff members, which also drew criticism.

Despite the concerns brought to the Senate, senators did not change Abboud’s budget except to transfer $3,000 from the senate unallocated fund to tech supplies. The budget passed 11-7.

Kyle Trager, general manager at KCSB, said the reallocation of funds by Abboud was unfair since it reallocates money in a way that was not approved by students.

“It is my understanding that this funding will come partly out of the lock-in fees that are allocated to each A.S. entity,” Trager said. “I would like to point out that the students who approved our lock-in fee approved it for KCSB’s usage and did not know that it could be used for this purpose.”

Trager said he did not understand why, rather than increasing the recharge, the funding for the Pardall Center would not come out of recharges on new lock-in fees which have not yet been allocated.

“There are a few new lock-in fees that received funding for the first time this year, thus … they have funds that wouldn’t be used by them for any A.S purpose,” Trager said. “My question to you is why were these funds not used for the A.S. Pardall Center?”

Trager also said he took issue with the idea of cutting staff salaries.

“I’d also like to give one final shout-out to the staff members that we work with every single day,” Trager said. “Our advisor at the station works crazy hours … I encourage you to strongly reconsider your cuts to staff salaries.”

“If you cut admin salary … it’s not that your admin don’t support you,” Moreno said. “They support you, they get underpaid to support you … They might not be able to afford to actually stay.”

Also at the meeting during Public Forum, co-chair of Student Commission on Racial Equality Hani Tajsar read a letter co-authored by himself and a number of other chairs and members of BCCs. The letter stated that BCCs felt unfairly treated during the process of creating legislation that directly affected them, and presented a list of demands to the elected officials.

“We, the representatives of the undersigned BCCs, are deeply troubled by the lack of decision-making power BCCs hold,” the letter states. “It is appalling that Associated Students Senate and executives perceive BCCs as inefficient and incapable of carrying out our mission statements in the service of the student body.”

BCCs demanded in the letter that senators rescind the A.S. bill to restructure, create a committee to research “a governing style that would allow for more BCC decision-making power,” and give BCCs the right to approve financial decisions regarding staff members, because “the majority of staff works closely with the BCCs,” among other things.

During Abboud’s report to the Senate, he defended his budget decisions.

Abboud said the alternatives to funding the Pardall Center through the recharge on lock-in fees were to either cut budgets on select groups, or to give up the center completely.

“The three options in my mind you have are you can keep the recharge … you can get rid of the Pardall Center, or you can cut the budgets of the groups that are in the base fee — essentially SIIRC, creative media, student lobby, the different executive offices,” Abboud said.

Abboud also countered arguments against cutting staff salaries by asserting that other students lacked adequate information on the salaries to have an informed opinion on the matter.

“The people who are upset or complaining … frankly aren’t qualified to comment on staff salaries,” Abboud said. “I’ve been working on this issue with [A.S. Executive Director] Marisela [Marquez] for over a year now, and I’m the only student who is allowed to know all the intricacies of staff salaries.”

During the Senate discussion on the budget, Off-Campus Senator Andre Theus said he agreed with Abboud that taking money from recharges to fund the Pardall Center was necessary in order to ensure enduring use of the center.

“I think that the way [the recharge] is what we have to do to keep it sustained,” Theus said.

On-Campus Senator Nikki Calderon advocated moving some money from the Senate unallocated fund, which exists in order to fund new projects that come up over the course of the year, to the funding of the Pardall Center to account for the concerns brought up at public forum.

After a short discussion on the budget, senators moved into a vote, in which 11 senators voted yes, seven voted no, and none abstained, resulting in a majority in favor of passing the president’s budget.

Also at the meeting, a Public Forum speaker further discussed the process of becoming a Community Service District with senators, and elections committee proposed amendments to their role during A.S. elections season.