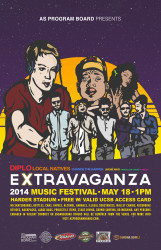 This past Monday, AS Program Board finally released the much-anticipated Extravaganza lineup, and the reception is amazing. In the past, ASPB has filled the Extravaganza headlining spot with big names such as Sublime, Dada Life, Snoop Dogg and Drake, but this year every single performer ranks equally high in their respected genre.

Local band Yancellor Chang and DJ T-Fresh earned their spots on the lineup through the 2014 Battle of the Bands and 2014 Battle of the DJs.
Despite a few technical difficulties at first, Yancellor Chang ended up winning the crowd and the judges’ hearts. They refer to their music as “if Beyonce, Frank Sinatra and Ozzy had a love child that made weird sounds.” You can check out their first recorded single, “Door Number Four,” on their bandcamp page and decide for yourself.

Meanwhile, T-Fresh has been building a name for himself in the UCSB EDM community for a while now, opening for DJs at the Hub as well as playing at clubs downtown like EOS Lounge. After a two-night battle, T-Fresh climbed to the top of the competition with a close win, beating opponent Angarola by one point.

Having just performed at Coachella a month ago, both Jhené Aiko and Chance The Rapper will now be exchanging the hot Coachella heat for Santa Barbara’s breezy air. Singer-songwriter Aiko has been back from her ten-year hiatus with her new EP Sail Out that reached high spots in the U.S. Billboard Top 100. The EP features rappers such as Childish Gambino, Kendrick Lamar and Ab-soul. Sail Out’s hit song, “Bed Peace,” peaked at #1 on Billboard’s U.S. Bubbling Under R&B/Hip-Hop Singles.

Chancelor Bennett, stage name Chance The Rapper, has been appearing on various music festival lineups as the success of his mixtape Acid Rap grows. At only 21, Chance has worked on songs with Childish Gambino and Justin Bieber. Despite his young age, he is one of 2014’s most anticipated rap acts. For those of you who attended Coachella weekend two and were disappointed to hear about Chance’s hospitalization a mere two hours before his scheduled set, it’s time to rejoice because, in less than two weeks’ time, we will be able to see him perform the chill and catchy “Cocoa Butter Kisses” right here at our campus.

Whereas the rap and EDM scene has been taking over not only the radio but previous Extravaganza line-ups, indie rock fans will be pleased to hear that Local Natives will be joining the list of musicians. For those of you who wished for a Vampire Weekend, Fleet Foxes or Grizzly Bear-esque act at Extravaganza, your prayers have been answered. Although their latest album Hummingbird is a lot more mellow than the debut album Gorilla Manor, Local Natives have kept their success strong and are currently on tour with Kings of Leon.

Finally, this year’s headlining DJ spot returns to UCSB, not as Major Lazer, but as Diplo. Diplo has entered DJ Mag’s 2013 top 100 DJs for the first time and landed himself spot 64. Although better known for his crazy parties, ability to convince girls to twerk onstage and trap remixes of popular songs, Diplo also produces songs for Beyoncé, Snoop Dogg and even Korean pop star G-Dragon. If you thought Dada Life brought the party last year, just wait ’til you see Diplo live.
Held at Harder Stadium, as usual, the show will take place on May 18 at 1 p.m. However, based on this year’s stacked lineup, I would suggest getting there early. That is especially true considering the line to get into last year’s Extravaganza (the only line I have seen in Isla Vista with a longer wait than Blaze Pizza). Plus, you really don’t want to miss any of these acts.

Graphic Courtesy of A.S. Program Board.

A version of this story appeared on page 8 of Thursday, May 8, 2014′s print edition of the Daily Nexus.