The Daily Nexus
News
Wealthy Environmentalist Tom Steyer Speaks on Climate Change
May 7, 2014 at 5:00 am by Kelly Lin

Steyer is the president of NextGen Climate, a nonprofit political advocacy group concerned with combating climate change. The event was hosted by the Carsey-Wolf Center and is part of the Energy Leadership Lecture Series sponsored by the Institute for Energy Efficiency.

According to Meaghan Shaw, communications manager of Institute for Energy Efficiency, the aim of the talk was to educate students and community members about energy-related topics.

“The goal … is to bring leading thinkers and researchers to [UCSB] to present their views on energy-related topics to the campus and community,” Shaw said in an email. “As a national leader in the climate change space and the founder of NextGen Climate, Tom Steyer is the right person to effectively communicate what climate change really means.”

According to David Auston, executive director of the Institute for Energy Efficiency, it is important for students to confront the issues posed by climate change as discussed in the lecture.

“This is an issue that has enormous impact of the future of our planet and everyone, students, members of the SB community and others should learn more about it,” Auston said in email. “Even if they are somewhat skeptical about climate change, they need to hear from a variety of people about this issue.”

Auston also said students and administrators at the University of California Office of the President have addressed these issues through concrete, long-term goals.

“UCSB students are already doing a great deal to advocate for climate change mitigation. With the new UCOP goal of becoming carbon neutral by 2025, it is even more important that students become involved,” Auston said.

“Climate change is a topic of global importance, but there is a lot of conflicting information out there that makes it difficult to fully understand,” Shaw said in an email. “There are many student groups on campus that are leading the way in sustainability, [and] I would look to them for guidance.”

“Tom Steyer is a very articulate and forceful advocate of climate change mitigation. He knows the issue well and is also very much focused on action, not just discussion,” Auston said in an email.

“Climate change is the most pressing issue of our time and we can no longer afford to wait to address this real threat,” Henkels said in an email. 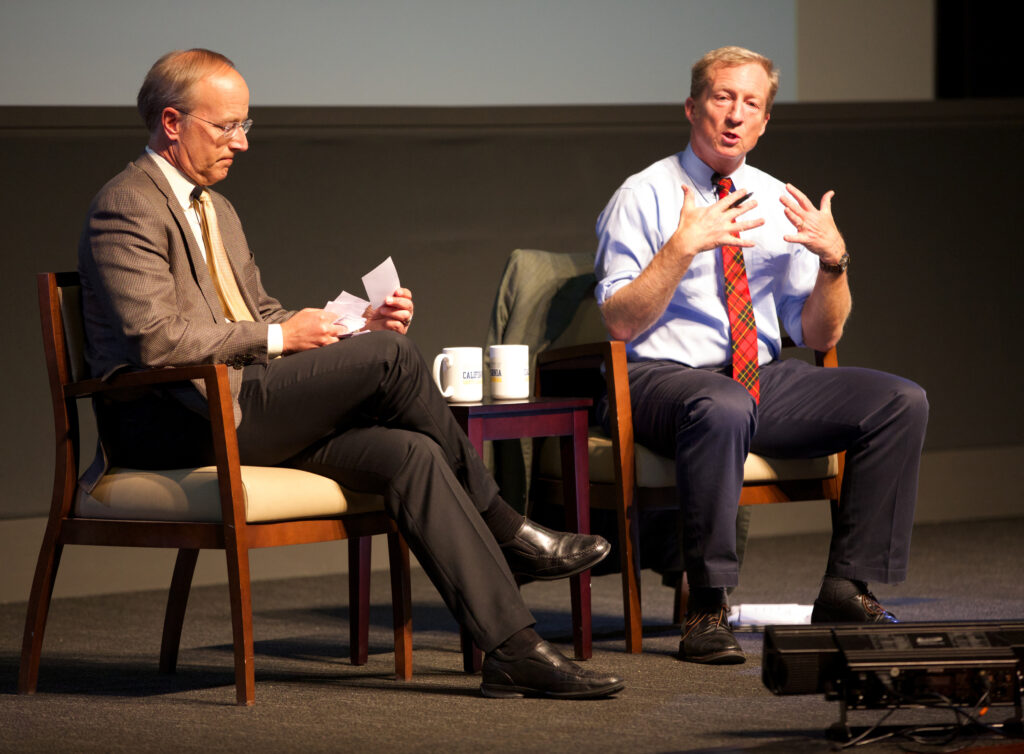 A version of this story appeared on page 3 of Wednesday, May 7, 2014’s print edition of the Daily Nexus.

I am looking for a serious environmentalist! I am President of Green Innovation Marketing, LLC that has a non-toxic biodegradable product Pyrocap B 136 that breaks the hydrocarbon chain to but out A, B, and D fire fuels. It breaks methane and CO2 and in a demonstration by the inventor, John States, on a small stack burning coal and oil that no a sniffer (a gas testing device) that no gases were leaving the stack. I am looking for someone daring enough to test this material either in a lab or on a stack. I can supply the material but… Read more »