The Daily Nexus
News
Students Exhibit Ideas for Entrepreneurial Fame
April 28, 2014 at 5:00 am by Aditya Tadanki

After Thursday’s exhibition, six finalists will move on to the New Venture Competition Finals for a chance at cash prizes and more

Twenty-two teams of UCSB students gathered in Corwin Pavilion last Thursday to pitch their entrepreneurial visions to judges during the New Venture Fair, a competition hosted by the Technology Management Program that will select six finalists to continue onto the New Venture Competition Finals in May.

The six finalists, who will be announced later today, will have the chance to win thousands of dollars in cash prizes and professional networking opportunities this May at the NVC Finals, where they will pitch business ideas on stage in front of a live audience and a set of judges. The NVC invites students to come up with entrepreneurial ideas and business models that they present to a panel of judges for a chance to win prizes and investment into their potential start-up.

TMP is operated through the College of Engineering and gives students guidance and training on key business practices such as industry analysis, product marketing, operations management, accounting and finance, legal issues and fundraising. Students participating in NVC take business classes and mentoring sessions throughout Winter quarter before competing in the New Venture Fair and NVC Finals on May 22 at Corwin Pavilion.

The fair last Thursday included ventures that focused on health, internet and retail, as well as other sectors. John Hausle, a fourth-year electrical engineering major competing in the contest, is the co-founder of Dynamic Laser Grid, a customizable laser-based children’s game. He said the TMP program helped in preparing him for his venture, which will simultaneously act as his senior project.

“The way we got involved was that two of us were engineers, and this was given to us as a senior project of sorts,” Hausle said. “One of our group members had been taking classes through Technology Management, and we took TMP 149.”

The class, TMP 149, is called “How to Build a Startup.” According to Hausle, the class taught him how to establish a new business as well as how to evaluate the details within that process.

While the TMP program is highly time-intensive, with participants investing months of their time into building a new start-up, Hausle said the process gives participants invaluable opportunities.

“This is really involved — they ask a lot from you,” Hausle said. “But you get to meet a lot of really successful people that help you out. You work hard, but you learn.”

Tom Carli, a fourth-year computer science major and co-founder of Shnack, an entrant in the competition, had his first experience with NVC last year. He said the TMP program and NVC have been “quite the ride,” since Carli found the opportunities they provided as both fun and challenging, while also giving him an idea about possible career paths after graduation.

“It changed my whole life as to what I’m going to do when I graduate,” Carli said. “I loved being able to build something yourself — competing and really doing the whole process of making your own company. I loved it so much that … I’m competing again.”

According to Carli, Shnack is a web and mobile-based application that reduces wait times for food in large stadiums, such as sports centers as well as other large venues with long lines.

“It allows you to order food, pay for it from your seat and then the vendor will let you know when your order is ready,” Carli said. “You can go pick up your order without ever waiting in line.”

Shnack has already achieved considerable success, according to Carli, having placed as a finalist in an international business competition in Barcelona. Carli said that, out of 300 teams, Shnack was chosen as one of the only two U.S. teams to compete. In addition, Carli said the Shnack team competed in L.A. Hacks, a hackathon hosted at UCLA featuring competitors from universities around the world. There, the team won Sprint’s API — or application programming interface — grand prize as well as 500 shares in the company.

Currently, Shnack is beta-testing its product with Coffee Collaborative and Hana Kitchen in Isla Vista in order to “work out the kinks,” Carli said.

“Next, we’re moving to the Santa Barbara Bowl. You’ll be able to mainly buy beer on draft, pay for it [and] pick it up without having to wait in line,” Carli said. “From there, we’re going to move to L.A., the minor league stadiums there, and then hopefully Dodger Stadium and Staples Center.” 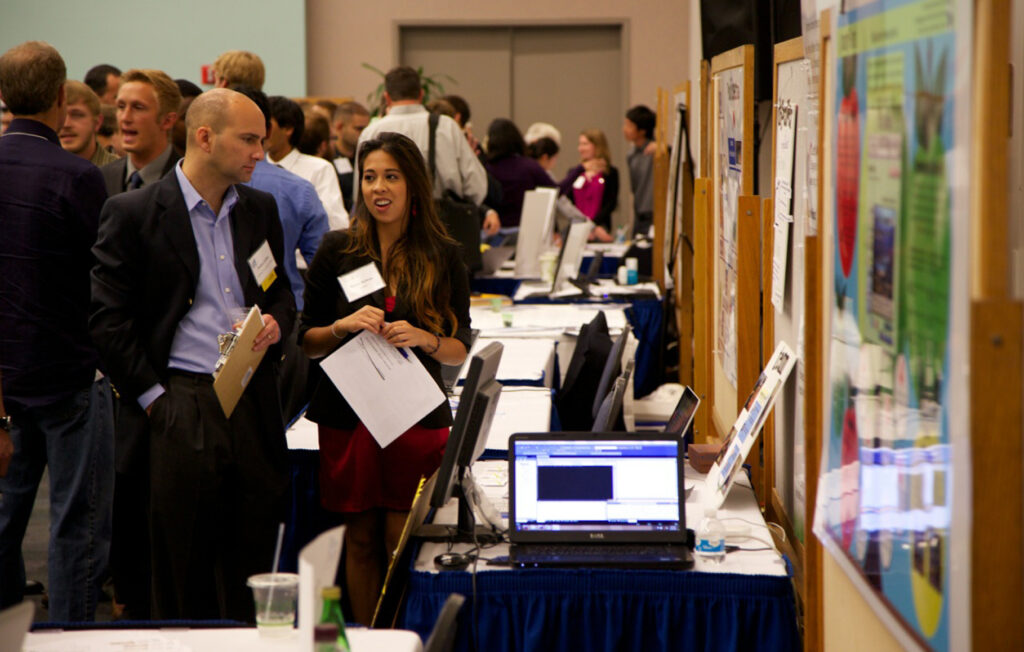 Judges reviewed student-presented entrepreneurial ideas at Corwin Pavilion in the New Venture Competition. Finalists will receive cash prizes and compete again in May.

A version of this story appeared on page 1 of Monday, April 28, 2014’s print edition of the Daily Nexus.