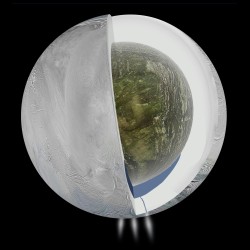 NASA announced last week that its Cassini spacecraft uncovered the existence of a large body of water underneath the surface of Enceladus, one of Saturn’s moons. Enceladus has been a fixation of the Cassini mission since the unexpected discovery of its water plumes, where geologic activity on such a small moon was largely unexpected.

Luciano Iess, a planetary scientist and lead researcher on the project from Sapienza University in Rome, Italy, said that the discovery demanded cooperation from worldwide agencies.

“The Cassini-Huygens mission is a cooperative project of NASA, the European Space Agency [ESA] and the Italian Space Agency,” Iess said. “It is the largest and most complex planetary mission ever carried out.”

Launched in 1997 from Cape Canaveral, Florida, the mission reached Saturn in 2004, delivered ESA’s Huygen’s probe in 2005 and has since been orbiting Saturn carrying out observations of all its moons.

The gravitational tug of a planetary body like Enceladus alters a spacecraft’s flight path. Variations in the gravitational field, such as those caused by mountains on the surface or differences in underground composition, can be detected as changes in the spacecraft’s velocity measured from Earth.

According to Iess, gravity on the moon was deduced by measuring the spacecraft accelerations by the Doppler effect, in which a wave changes frequency in relation to an observer.

“We send a radio signal of a very precise frequency toward the spacecraft, where it is received and retransmitted to ground. The Deep Space Network antennas receive the signal from the spacecraft and carry out the Doppler shift measurement, from which the spacecraft velocity is inferred,” Iess said. We can detect changes in velocity as tiny as 20 microns per second across the solar system.”

The precise measurements taken by the Cassini probe show a “negative gravity anomaly” at Enceladus’ south pole that is not as large as expected from the deep depression detected by its onboard camera. This led researchers to believe that there must be dense material at depth that compensates the missing mass: namely, liquid water about seven-percent denser than ice.

Iess said that a combination of gravitational and geographical studies revealed that the ocean covers an area about the size of Lake Superior and is approximately 10 kilometers deep.

“Comparing gravity measurements with the satellite’s topography, we have been able to estimate the size of the water reservoir,” Iess said.

The only planetary body where water plumes similar to Enceladus’ have been detected is Europa, one of Jupiter’s largest moons. Iess notes that Enceladus’ ocean is small compared to other subsurface oceans that are known to exist on Europa, Ganymede (Jupiter), Titan (Saturn) and likely Callisto (Jupiter).

Along with Europa, Enceladus is one of the only places in the solar system with a liquid water ocean. While further investigation is required, particularly to confirm whether Europa’s plumes are continuous or transient, the two moons are the most likely candidates at this point for researchers to find alien life or organic molecules.