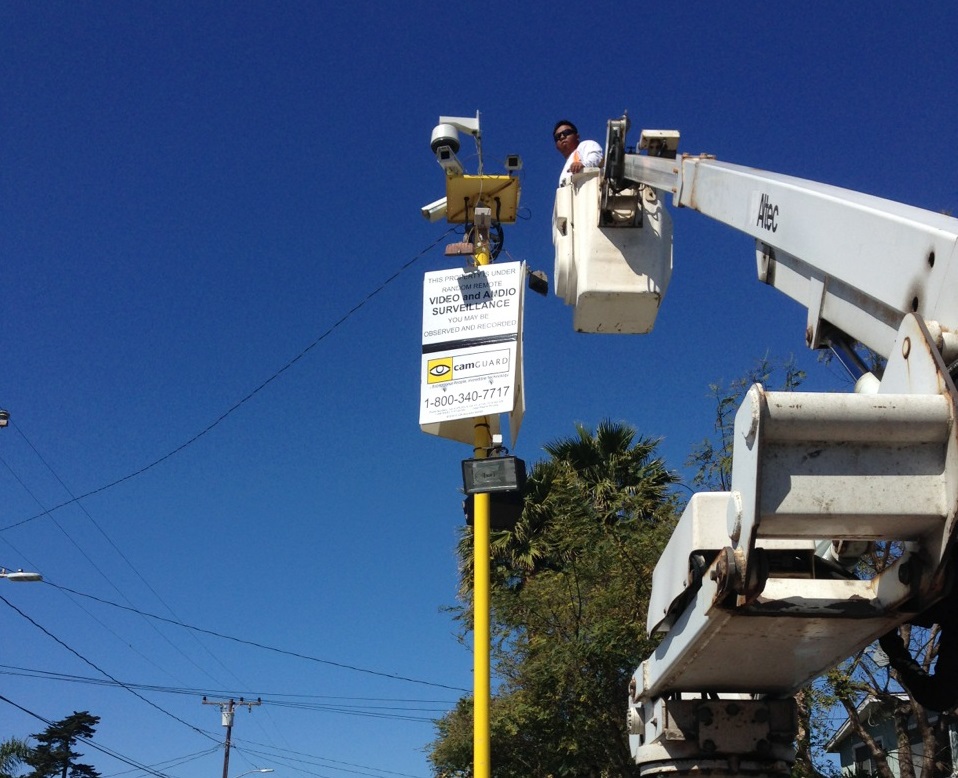 The cameras, five of which are located on Del Playa Drive with a sixth located near Freebirds, will remain on a temporary basis until June, when community leaders will deliberate on whether or not to keep them. Last quarter, similar camera installations were placed on university property following two sexual assaults that occurred in Isla Vista in late February. Even though they are installed on public property, the university is paying for the cameras; however, administrators are not saying how much is being spent on them.

The installations are each 25 feet tall and feature large lamps hanging off the tower to illuminate the surrounding area. The cameras are stationary and not continuously monitored, although they do record video continuously and may be accessed as evidence for reported crimes.

According to Senior Associate Vice Chancellor for Administrative Services Marc Fisher, the cameras that are not on campus property are paid for by the university, but are under the jurisdiction of the Santa Barbara County Sheriff’s Office.

“[The Sheriff’s Office] is responsible for the placement and operation of the cameras,” Fisher said in an email. “UCSB is providing funding resources to the County for these cameras. This funding is consistent with other contributions that we have made in Isla Vista for safety, including additional lighting and policing.”

Fisher would not specify how much is being spent on the new cameras, although he said “the campus is not utilizing student fees to pay for the noted cameras.”

According to Kelly Hoover, Public Information Officer for the Santa Barbara County Sheriff’s Office, the cameras along Del Playa Drive were installed in light of recent sexual assaults in Isla Vista and in part due to upcoming Deltopia festivities.

“My understanding is that … they were installing the cameras already following the sexual assault,” Hoover said. “Deltopia was coming up, [so] they said ‘Would it be helpful to install some for Deltopia and due to the other crimes that you’re seeing?’”

While Hoover said the cameras are not solely for Deltopia, she said law enforcement are looking to them as another tool for regulating this weekend’s festivities.

However, Isla Vista Foot Patrol Station Lieutenant Rob Plastino said the installations in Isla Vista are primarily a part of the response to recent sexual assaults in Isla Vista, but will only be continuously monitored throughout Deltopia.

“The cameras were not placed to monitor Deltopia,” Plastino said in an email. “They are in response to the recent sexual assaults that have taken place in I.V. and the campus. “

Nonetheless, Plastino also said the cameras will be used to monitor Deltopia.

According to Plastino the IVFP has used cameras in the past, such as during Halloween weekend in order to aid law enforcement efforts to monitor large crowds.

“We have solved crimes and stopped assaults during Halloween due to the cameras,” Plastino said in an email. “Over the past few years, we have had an increase in the use of video footage taken by witnesses with their cell phones, to solve crimes.”

Hoover also said that the cameras are placed along Del Playa and in the business district of Isla Vista because these areas typically feature the highest law enforcement activity.

The cameras have been installed for two main reasons, according to Hoover, which is as a “crime deterrent” and as a means for investigating crimes that are not already prevented.

“If somebody is considering committing a crime and they look up and see those cameras, and it makes them think twice about doing that, then that is a success,” Hoover said. “The other reason is, if somebody does commit a crime and we are able to view the video and help find the perpetrator or perpetrators, then that also is a huge success.”

While the cameras are temporary for now, Hoover said local police officers may continue using them, depending on how this current trial period goes.

“This is an experiment,” Hoover said. “We want to see how effective they are.”

Hoover said the decision in June regarding whether or not to keep the cameras will involve discussion amongst a number of community leaders and law enforcement agencies.

She said, “I don’t have a list of people, but it would seem the university, the Sheriff’s Office, the County, … UCSB Police, the first responders, County Fire, CHP, public works, anybody who’s involved in this event that’s providing safety and overseeing Isla Vista I would think would be a part of it.”

-Daniel Slovinsky contributed to this article.

“The cops have a camera pretty much aimed at my bedroom window on Sabado. That doesn’t make me feel any safer”
UCSB student

“Meta-analyses from the UK, along with preliminary findings from the US, indicate strongly that video
surveillance has little to no positive impact on crime.”
ACLU Expert Findings on Surveillance Cameras

Bob is correct. Here is the ACLU study (actually an aggregate of studies)that shows that surveillance cameras are ineffective: http://www.aclu.org/files/images/asset_upload_file708_35775.pdf It should also be noted the chilling effect cameras have on our rights including the right of free speech, the right of assembly, and the right of the People to seek redress of grievances from their government. It is understandable that police want as many tools to prevent and solve crimes, but their view is too narrow to effectively balance the pros and cons to what many people view as an intrusion of government and authority into their lives. Similarly,… Read more »

This is really disturbing. None of the injuries in prior years would have been stopped by a camera on a stick, only by boots on the ground, which are already there. This seems more like a blackmail mine in case kids ‘act up’ and I wonder where the right comes to photograph kids in private yards and balconies.

My son is deciding between UCSB and other colleges now, and I was looking for news of the college to get an idea of what opportunities are there. I never thought to see a Big Brother display like this.

Reading the article more closely, there seems to be some confusion about the Fourth Amendment and cameras. After an accident or attack, using video taken by bystanders and donated is one thing, the taping wasn’t government action without due process, probable cause, or even the existence of a crime. However for the government to film people in their yards and balconies, and through windows, is very different.

I don’t think that is true… IVFP has been using cameras at Halloween for years. I’m pretty sure they’ve stopped a few crimes and saved a lot of people from getting hurt.

This will be a bit of a repost, but I wanted to share my e-mail I just sent to Chancellor Yang. I encourage others to also express their views. Chancellor Yang, I graduated from UCSB in 1995 and resided in Isla Vista for 4 years. I write to you to express my deep concern regarding the surveillance poles installed first on university property, and more recently on the streets of Isla Vista. Although I now live in Oakland, I keep myself informed about UCSB, and I am aware of the recent spike in violence that has occurred in and around… Read more »

My law office represents a number of residents living in the Isla Vista area. we have talked with Santa Barbara County Counsel concerning the cameras, lights, audio recording and threat to arrest individuals for playing music on their private property. First, the cameras were installed without the necessary permits. As of about 3PM, the permits were not yet issued. without the permits, the cameras, lights and audio must be shut down and/or removed. Assuming that they get the permits, we addressed the issue of high-intensity lights shining into private property and causing a nuisance, as well as cameras that are… Read more »

You all are ridiculous and very cynical and counter productive. 1. The cops are aiming the cameras toward the street… not your ugly apartments. Are you nervous about your thrift store apparel? 2. They don’t need to justify a camera to record a public place. There is no right to privacy in Public place like the sidewalk. Perhaps they need a permit but recording in Public can be done by anyone. If I’m wrong then I’m suing SB PARTY SCENE. 3. The cops aren’t even going to watch the videos unless they need to. Do you honestly think they can… Read more »

To “IV Resident” 1. The cops are aiming the cameras toward the street… not your ugly apartments. Are you nervous about your thrift store apparel? How do you know cops are not pointing them inside residences? Apparently, the cameras are capable of pivoting and tilting. Also, please refer to this study by the ACLU which details abuses in England where operators zoom in and ogle at women in a voyeuristic manner (page 16): http://www.aclu-il.org/wp-content/uploads/2012/06/Surveillance-Camera-Report1.pdf 2. They don’t need to justify a camera to record a public place. There is no right to privacy in Public place like the sidewalk. Perhaps… Read more »

Gaucho Alum, The cameras are aiming towards the street. To say otherwise is ridiculous. Point for point: First, saying that you believe they are pointing at houses is pure speculation based on nothing. Sure the cameras have pan/tilt features… that doesn’t mean they use them. I have the ability to drive 120+ MPH but I don’t. The only people who know where the cameras are pointed towards are the police and they say they are pointed towards the street. So, basically the only people with actual knowledge doesn’t include you. Lastly, the job of the cops is to protect the… Read more »

The panopticon in action.

IV Resident, My goal here is not to convince you of anything nor to argue with you nor to prove you wrong. You are free to come to your own conclusions and form your own opinions (I say this sincerely and not condescendingly). I never said that the cameras are pointing into residences. I also did not make legal arguments. I leave that up to fine lawyers like Jon Andersen. The crux of my arguments are related to a functioning and healthy democracy based on transparency and community input. Here are some thoughts for people to consider: 1) Was there… Read more »

Vice Chancellor of Student Affairs, Dr. Michael Young, engaged the community this afternoon via Reddit. I applaud him for doing so, and it represents a good start. I share with you his comments regarding the surveillance cameras. The entire discussion may be found within the threads here: http://www.reddit.com/r/UCSantaBarbara/comments/22damr/i_am_ucsb_vice_chancellor_of_student_affairs/ Q: Do you think the camera’s did anything to actually prevent any crimes from being committed last night? Bad stuff clearly happened with or without the cameras, and therefore doesn’t it seem irresponsible to invade people’s privacy for an ineffective policy? Michael Young: I don’t buy the “the cameras caused us to… Read more »