Associated Students has launched a five day-long campaign this week called “Spring into A.S.,” with A.S. representatives stationed at the Arbor from 10 a.m. to 2 p.m. all this week to encourage students to learn more ongoing A.S. projects and how to get involved with student government, in light of A.S. elections happening later this quarter.

From topics of environmental sustainability and recruitment to budgeting finance and student health, “Spring into A.S.” will inform students about the organization’s role on campus, while simultaneously offering free food and variety of goodies. The week-long series of events are also tabled in collaboration with Committee on Committees and a variety of their other Boards, Committees and Commissions (BCCs).

Today’s event, “A.S. Open House,” will take place at the A.S. Main Office in the Multicultural Center and will offer attendees time to network with A.S. officials. Tomorrow will feature two finance-related events called “Where’s My Money?” and “Teach the Budget.” Finally, Friday’s event, “Student Health Day,” will take place on the SRB Lawn to talk about mental, physical and sexual health.

According to A.S. President Jonathan Abboud, the campaign was developed by the A.S. Office of the President. The week’s basic goal is to give students opportunities to learn about A.S. and decide whether it is a group they want to get involved in.

“The project is to make visible all that Associated Students does and publicize Associated Students, get students more informed about where their money is going and what kind of activities we’re working on, especially before the election,” Abboud said.

Monday’s event was “Sustainability Day,” which focused on the California drought as well as a number of other environmental issues in the county, especially regarding the coastline community of Santa Barbara. Members of the A.S. Office of the President, I.V. Tenants Union and Environmental Affairs Board also passed out reusable bags, pins supporting water conservation and free food from the I.V. Food Co-Op.

Megan Roy, a fourth-year environmental studies major and Outreach and Education Coordinator of UCSB Coastal Fund, said the Coastal Fund is an A.S.-funded organization that provides grants for conservation projects for the local coast.

“There are students who work in different labs, like bio labs … that directly relate to our mission statement of protecting, restoring and enhancing the coast,” Roy said. “It’s really cool to see a student come in and propose their project. We can fund their projects and make them happen.”

Yesterday’s event was the “A.S. Recruitment Fair,” and at tomorrow’s event, “Where’s My Money?” A.S. will be distributing surveys to garner student input about how students think A.S. should allocate its $10.6 million budget.

“Every year, we make a new budget, and that is a time we ask to students what they think is important to fund in the budget,” Abboud said.

Also taking place tomorrow at the Student Resource Building (SRB) Multipurpose Room from 5 p.m. to 6:30 p.m. will be “Teach the Budget,” a presentation on California’s budget and issues surrounding the financing of higher education.

“Spring into A.S.” culminates on Friday at the SRB lawn with “Student Health Day.” A bounce house, free candy, condoms and lube will be provided at the event.

According to Abboud, Spring Quarter is when many opportunities open up in A.S. since all of the positions must be re-filled for the next school year. Some of these positions will be in the senate, executive office and BCCs.

“All the positions in A.S. only last one year, so all 300-plus positions completely turn over every year,” Abboud said. “On top of that, they are employment positions. There’s probably close to 600 to 700 opportunities in A.S. total.”

Aiden Brorsen, a second-year history of public policy major and Chair of the Committee on Committees, also said he believes now is an ideal time to start getting involved.

“We are preparing students from spring to summer as opposed to just fall, so it’s kind of like a transitional event,” Brorsen said. 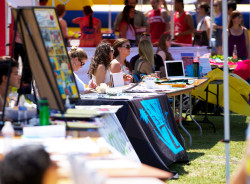 “Spring into A.S.” holds a number of events this week to encourage student involvement in allocation of funds and office positions. Such events will focus on student health, the environment and the budget.

A version of this story appeared on page 5 of Wednesday, April 2, 2014’s print edition of the Daily Nexus.