After initially facing charges for only public intoxication, a 22-year-old man arrested Sunday night is now being charged with possession of marijuana for sale and transporting marijuana for sale after police found 14 pounds of the drug and $14,000 in cash at his residence on the 6500 block of Segovia Road.

Donovan Christensen, a former student and basketball player for Sonoma State University, was taken into custody Sunday night after someone reported to police that he committed a battery on the 6700 block of Del Playa Drive. Police officials subsequently searched and arrested Christensen, eventually finding evidence that he was selling marijuana from his residence. After obtaining a search warrant to investigate Christensen’s Segovia Road home, officers located large amounts of marijuana and cash at his residence and are now charging him for the sale and transportation of illegal substances.

Sgt. Rob Romero of the UCSB Police Department said there is no indication that Christensen was uncooperative at this time of his arrest. However, Romero said that Christensen was intoxicated to the point of being unable to control himself when he was first found by police officers.

Ginny Chung, a resident on the 6500 block of Segovia, said this particular area of Isla Vista is more prone to illicit activity than other blocks, even considering the level of crime generally seen in I.V.

“It’s a college town so it’s kind of expected, but I would say that this block is more sketchy than others,” Chung said. “There are two frat houses on this block and other association houses.”

Although Chung initially indicated that she does not see drug dealing as a major threat to I.V. residents, she later said that large-scale dealers can bring in more violent crime.

“It poses a danger when it’s that big of a business, just because other people hear about it and go out to attack or get them for such an amount of money,” Chung said.

Greg Coumes, a first-year aquatic biology major at UCSB, said he believes this weekend’s bust will reduce some drug-related crime and violence in I.V.

“If they just caught this guy with this much, that’s a lot, Coumes said. “That’s pretty much taking a lot of the drug trafficking and transactions out of I.V.”

“This is a pretty significant seizure, and the patrol officers working this did an outstanding job,” Romero said. 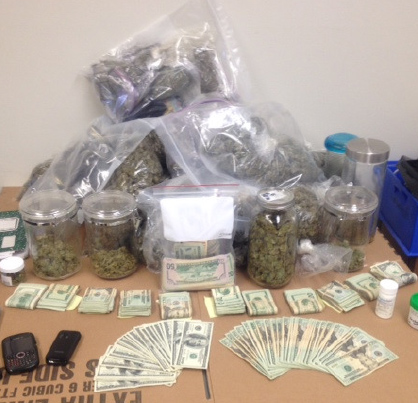 Over $14,000 in cash and 14 pounds of weed were confiscated at Christensen’s residence.

A version of this story appeared on page 1 of Wednesday, April 2, 2014’s print edition of the Daily Nexus.