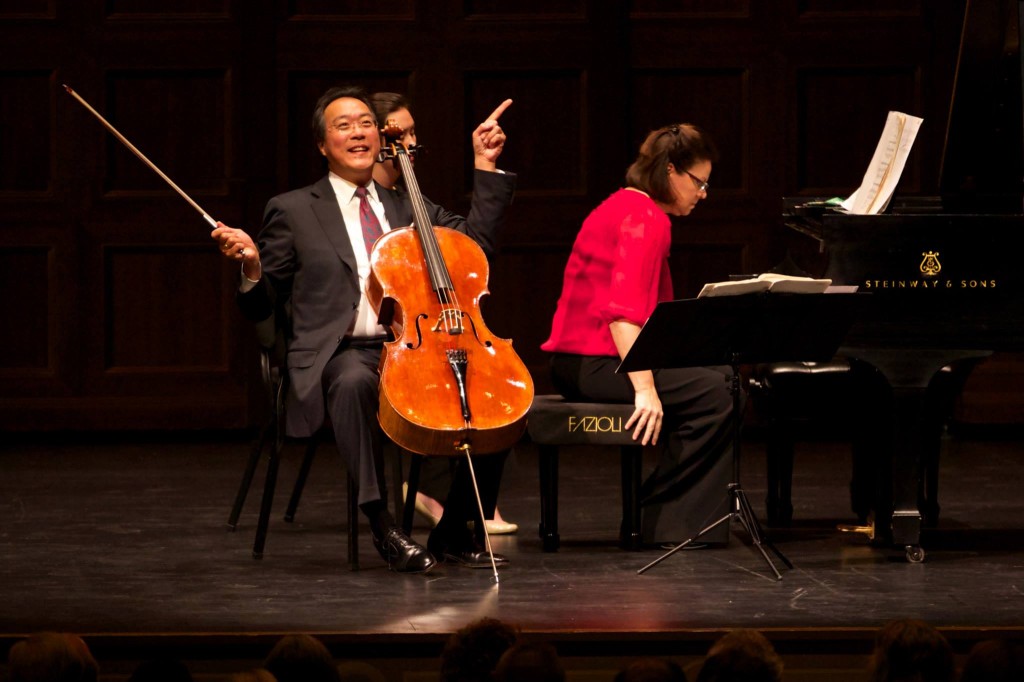 The recipient of over 16 Grammy awards, the Presidential Medal of Freedom and numerous other titles, Ma has been widely recognized as one of the most talented classical musicians in the world. Scott, who is known throughout the UK for her virtuosity at the piano, has worked with Ma for over 30 years. Their performance Thursday and Friday’s master class were both hosted by Arts & Lectures.

“As Yo-Yo Ma himself has said … Arts & Lectures presents the world onstage, on one stage. You never have to leave Santa Barbara, the world comes to you,” Billeci said.

Ma and Scott eased into the evening concert with a focused rendition of Igor Stravinsky’s Suite italian. The intermix of piano and cello remained complementary throughout, heightened by the equally lively immersion of both artists in the suite’s Andante before ending to enthusiastic applause with the light “minuette e finale.”

Next came Alma brasileira by Heitor Villa-Lobos, arranged for piano and cello by Argentinian composer Jorge Calandrelli, Oblivion by Astor Piazzolla arranged by Kyoko Yamamoto, and an energetic performance of Dansa negra by Camargo Guarnieri, also arranged by Calandrelli.

Continuing with the Latin theme, Ma and Scott treated patrons to Olivier Messiaen’s “Louange à l’éternité de Jésus” from Quatuor pour la fin du temps and Johannes Brahms’ Violin Sonata No. 3 in D Minor, op. 108 after intermission. This second half of the performance, Ma’s mastery of tension was highlighted in the modulating strains of Messiaen’s piece, concluding by holding the audience through a twenty second silence. Both Scott and Ma ended the night with a performance of Brahms’ “Finale: Presto agitato” deserving of the dramatic title, each moving in coinciding fervor with the music.

Ma led Scott in throwing bouquets the pair received on stage into the audience, eliciting cheers and renewed applause, before exiting. The theater boomed with excitement as the pair immediately returned, to play an encore of Edward Elgar’s “Salut d’amour” not scheduled in the program notes.

Chancellor Yang, who remained in the lobby greeting patrons after the performance, expressed sincere wonder at Scott and Ma’s talent.

“This music is kind of … like coming from heaven,” Yang said. “You really don’t have too many chances in life to listen to this.”

This story appeared as an online exclusive on Friday, March 14, 2014.

Correction [4/14/2021, 10:19 p.m.]: A previous version of this article contained a misattributed quote. This article has been updated with the quote omitted.