The Daily Nexus
News
UCSB Implements Security Cameras in Light of Recent Crimes
March 7, 2014 at 8:41 am by Staff Report 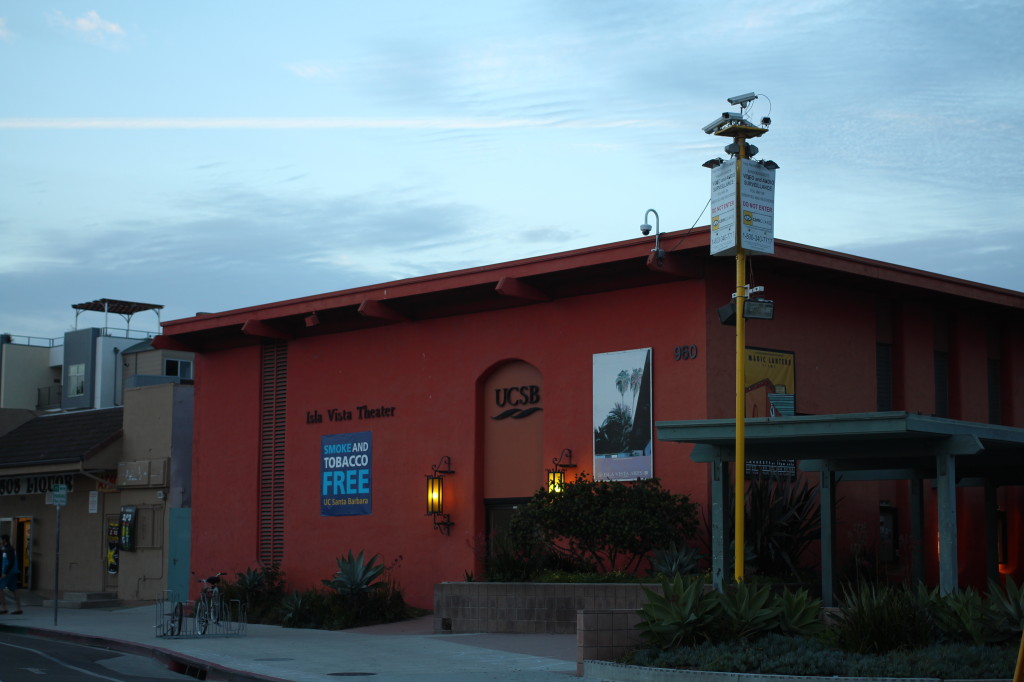 Following two serious incidents of sexual assault in Isla Vista in recent weeks, two temporary security camera towers have been erected near Embarcadero Hall and I.V. Theater as part of an ongoing criminal investigation and in an effort to help UCSB Administrative Services determine where to place permanent camera installations.

Each tower is approximately 25 feet tall and features five to six cameras each, with large lamps that hang off the shaft of each tower in order to provide lighting to the surrounding area. To respect the privacy of local residents and students, each camera is angled to avoid observing the inside of nearby university property and private residences, and the towers do not record any sound, according to UCSB Director of News and Media Relations George Foulsham.

There are signs on the towers that indicate they engage in “random remote video and audio surveillance,” and the cameras have been placed on the perimeter of campus. However, the camera footage is “not actively monitored” but can be retrieved to aid a criminal investigation, according to Foulsham.

“In addition to being a useful tool in the course of an investigation, it is hoped these cameras will serve as a deterrent and provide an added element of safety for our students,” Foulsham said in an email.

While the cameras have only recently been installed, Foulsham said UCSB has used security cameras on campus buildings for many years, as many universities do. He said the new cameras are intended to protect students and nearby residents, and UCSB Administration will seek the input of campus community members when taking similar security measures in the future.

“The safety and welfare of our students and campus community is our highest priority, and we will be working to solicit feedback from students, faculty and staff on these and other safety measures going forward,” Foulsham said.

This story appeared as an online exclusive on Friday, March 7, 2014.

I would suggest that instead of spying and peeping in Isla Vista the University would do better to examine it’s own violent side. This link connects to “The University of California and the Military Industrial Complex”
by UCSB graduate and activist Darwin Bond-Graham.
http://www.counterpunch.org/2013/07/18/the-university-of-california-and-the-military-industrial-complex/

Are you crazy blind? The obvious cause of sexual assault and violent behavior in general at UCSB is ALCOHOL… Not military anything or policy anything.

If UCSB students could use peer pressure to drink responsibly it would help soo much!

We need to be discussing our alcohol consumption and lifestyle in this conversation. In my opinion we are all creating this culture because we rationalize ways to think what we’re doing with alcohol and drugs is okay.

Who has research/stats on alcohol and sexual assault?

D Man, You might get some information and ideas by contacting the UCSB Health & Wellness Program located in the Student Health building at 893-2630 wellness@sa.ucsb.edu

I very much dislike this added surveillance around IV. Students have already very limited privacy in this small university- you guys are using recent crimes as an excuse to encroach on that even more. I understand the rationale but we as a community should at the very least have a say in whether or not these cameras are put up to monitor our activity day and night. In any case, I doubt they will make any difference whatsoever in the prevalence of sexual assault because most of these cases dont take place near embarcadero or IV theater. If anything, they… Read more »

If this were to stop sexual assaults it would be pointed at deserted stretches of path between IV and campus, not at the party streets. The residents of IV should vote out and get replaced those who don’t protect their privacy.