The Daily Nexus
News
Recognizing Religion in Conflict
March 5, 2014 at 5:00 am by David Jackson

Najeeba Syeed-Miller, an internationally recognized author and assistant professor of interreligious education at Claremont School of Theology, gave a talk about religious conflict and mediation at the MultiCultural Center Theater yesterday.

Titled “Interfaith Peacemaking: Healing the World,” the talk highlighted the importance of understanding religion’s role in conflict escalation and resolution, as well as the consequences of ignoring this role. Miller’s work focuses on resolving a number of complex religious and cultural conflicts in the Middle East, and she has intervened in disputes between urban gangs in Southern California. Her efforts have garnered a Southern California Mediation Association’s “Peacemaker of the Year” Award in 2007, and in 2008, she received the California State Legislature Women in Law Award for her work to reduce conflict worldwide.

Miller said religion and culture play a role in every conflict, regardless of context, even if these roles may not be immediately evident. As a result, she said understanding how these two ideas initially play into a conflict is critical to reaching a resolution.

According to Miller, people tend to seek information that confirms their biases, but Miller said there are greater rewards for abandoning that tendency and adopting another person’s perspective of an issue.

“To me, part of maturity and perspective-taking is when you can actually learn and put yourself in someone else’s shoes,” Miller said. “If you’re able to move into that capacity, a lot of research shows that you will actually be more successful academically.”

However, Miller said she understands that perspective-switching is no easy feat: “Empathy takes practice … Empathy is not just a feeling; empathy is a skill.”

Miller advised students to improve specific abilities of diffusing tension and communicating effectively, as she said these abilities revolve around the interworking of interpersonal relationships and rapport-building, even with people of different opinions and ideas.

“I think some of the classes and topics that are helpful around peacemaking are learning to be an active listener, learning to build trust around parties in conflict, understanding how a community is organized [and] how it builds leadership … and also just being able to handle — as a mediator — really diverse viewpoints,” Miller said.

Miller said she hopes students will learn new skills for resolving conflicts from their own life experiences, especially in a university setting, since such experiences can teach students valuable life lessons.

“This environment is a great one for learning and also practicing the ability to work across differences,” Miller said. “If you do it well, you’ll also learn about yourself and you’ll learn something about whomever it is you’re engaging with.” 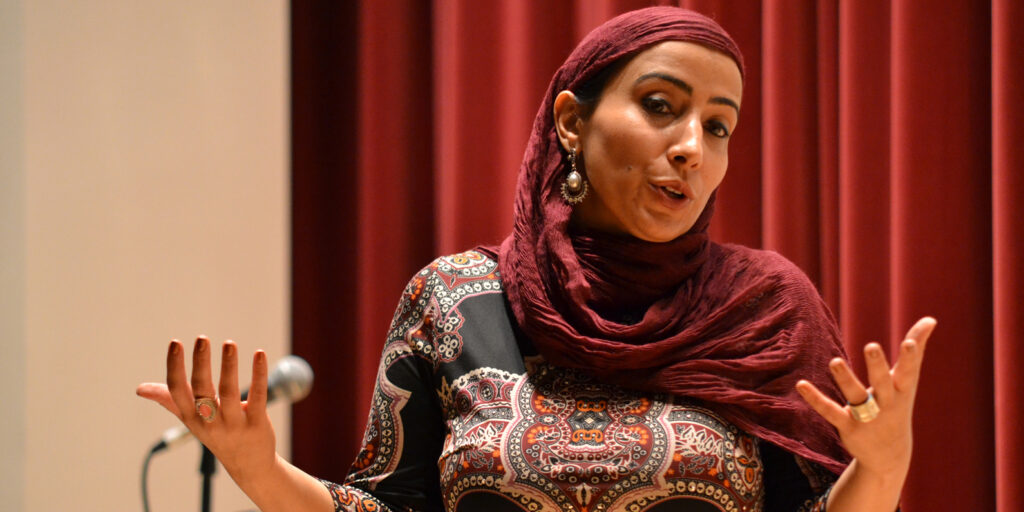 Syeed-Miller, who is both a recognized author and an assistant professor at Claremont School of Theology, primarily focused her talk on how understanding the role of religion can aid in conflict resolution, and the problems that ignoring those roles can cause.

A version of this story appeared on page 3 of Wednesday, March 5, 2014’s print edition of the Daily Nexus.

It’s worth noting Islam is the ONLY religion whose prophet regularly committed and encouraged conflict against others.

^^ Arafat, would you have thought to make that comment if Syeed-Miller was not pictured?