The Daily Nexus
News
Students Smash Scales In Support of Body Positivity
February 27, 2014 at 5:00 am by Emani Oakley

As part of National Eating Disorder Awareness week, members of the UCSB Women’s Center destroyed weight scales yesterday outside the Student Resource Building at an event called UCSB SMASH: A Love Your Body Event, which sought to inform and aid students struggling with unhealthy body images and standards.

Joined by members of Health & Wellness, the Women’s Center and the Tri Delta Sorority, participants set up tables, gave out information about healthy lifestyle choices and encouraged students to destroy scales with a hammer to represent a breakdown of the constrictions and unfair standards people feel regarding weight. Afterward, the Women’s Center held a panel featuring a nutrition specialist, a fitness professional, a healthy eating advisor and psychologist.

Delyla Mayers, a second-year sociology and feminist studies double major and student staff member for the Women’s Center who led and hosted the event and panel afterward, said she modeled it after an event called Southern Smash at another university, and added that she hopes it will continue in future years.

“I really want this to become an annual thing so that after I leave this campus in a couple of years, this will still be an event everyone looks forward to and [feels they] can really be themselves,” Mayers said.

Mayers said destroying scales symbolizes a release from a cultural obsession with weight, which she said continues to contribute to the prevalence of eating disorders.

“A lot of people who have eating disorders see the number on the scale as something very restrictive and something that is very constraining to them,” she said. “Today is just a day to celebrate true beauty and let go of the numbers and anything that is weighing you down.”

According to Mayers, the organizations is aiming to help people realize that “true beauty come in all different shapes and sizes” and negative body images are a pressing issue at college campuses nationwide.

“Fat talk is everywhere,” Mayers said. “All we hear everywhere saying ‘Oh my God, I’m too fat. I can’t wear this’ … I just really want this to be a freeing day and a celebration. We don’t have to look like this — we don’t have to be a size zero.”

With events like SMASH, students can directly address the unhealthy body standards often presented in popular media, according to Mayers, who said media images are often Photoshopped and promote unrealistic expectations.

“They only represent the five percent of women that have that ideal body type,” Mayers said. “It’s really constricting because you feel like there is no leeway, and that you’re not perfect.”

Carrie Flack, a nutritional specialist at Student Health and one of the panel speakers, said the event touched on different issues relating to eating disorders and dieting, in an effort to destroy many diet myths. In regards to getting advice on dieting, she recommended students talk to professionals about healthy diet practices and exercise to ensure they get accurate information.

In addition to smashing scales, participants wrote down body issues they wished to resolve and why they participated in the event. Many students also contributed a handprint to a poster pledging solidarity in challenging negative body perceptions.

“I wrote on my sign that I am smashing for freedom because I think that it is something I.V. really needs,” Padilla said.

According to Padilla, students should reevaluate how they perceive their everyday eating and exercise habits, making sure to put health above all else.

“You shouldn’t eat and then feel bad about what you ate after, or eat a hamburger and feel that you have to go to the gym,” Padilla said. “Exercise is a form of enjoyment. When I go to the gym, it’s because I really love running.”

While saying the event was encouraging and something that “a lot of girls … really need,” Padilla said she has personally struggled with body images and healthy eating in the past.

“I did cheer for three and a half years in high school,” Padilla said. “I was always really into dance, and so with something like that, it’s always like you have to be super healthy.” 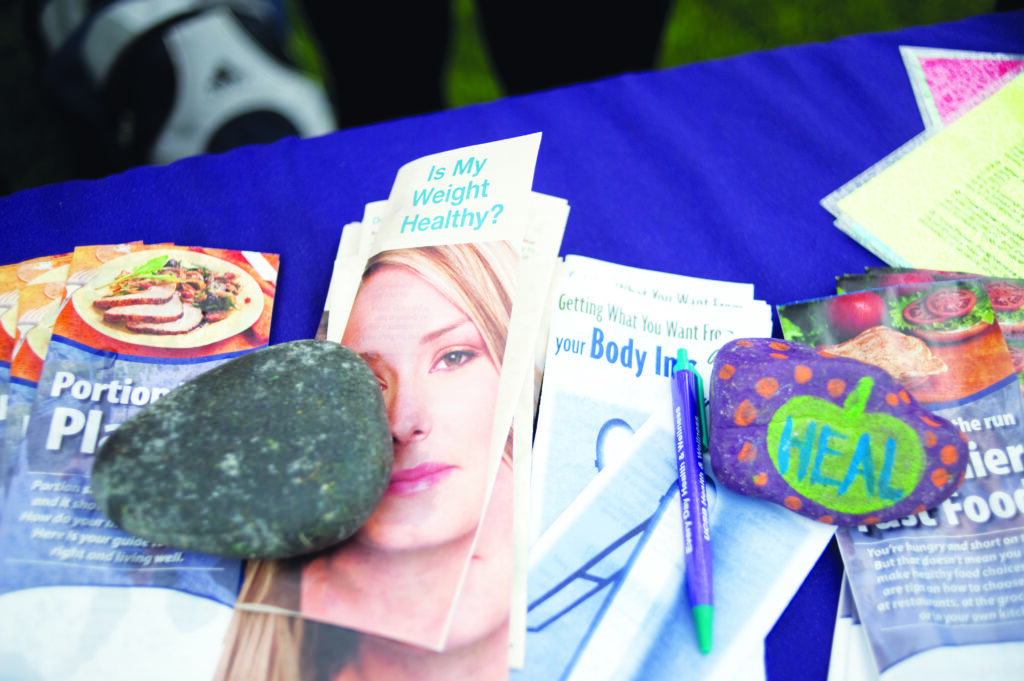 The UCSB Women’s Center, among other organizations, handed out informational pamphlets at tables near the SRB.

A version of this story appeared on page 5 of Thursday, February 27, 2014’s print edition of the Daily Nexus.

[Correction: A previous version of this article incorrectly stated that the Womyn’s Commission, an Associated Students group, held the panel following the event. The panel was actually held by the Women’s Center, a program run by the Division of Student Affairs. The Womyn’s Commission was involved in a volunteer capacity and co-sponsored the event.]