The Daily Nexus
News
Curiouser and Curiouser: Last Lecturer Shares His Story
February 27, 2014 at 5:00 am by Hannah Nelson

Last night, linguistics professor Robert Kennedy lectured as if it were his last chance to do so, speaking on linguistics and his own personal experiences in the field, as part of the UCSB “Last Lecture” series.

As the third installment of the UCSB “Last Lecture” series — which is sponsored by Associated Students and the Academic Affairs Board — Kennedy’s lecture gave insight into everything from his boyhood love of scrutinizing maps to his high school fascination with Latin. His talk drew focus to the idea of curiosity and how his own love of facts and trivia led him to where he is today. The event is part of the “Last Lecture” series, which is inspired by the lecture Carnegie Mellon computer science professor Randy Pausch gave in 2007 before passing away from pancreatic cancer. Kennedy, like all other UCSB last lecturers, was nominated and chosen to speak by UCSB’s undergraduate population, and he was required to present a lecture as if it is the last one in his lifetime.

According to Kennedy, his curiosity has made him happy and now he seeks to share that curiosity with the students he engages. In discussing his love of linguistics, Kennedy said he chose it as a major, instead of Latin, because he felt there was more to learn and explore. By talking about his own personal and professional endeavors, Kennedy said he is hoping to inspire students to fulfill their own passion and goals as well as possibly take another look into the field of linguistics.

“I’m hoping to … encourage the audience to be okay immersing themselves in the details of what they love to learn about, to be open to a different perspective on language usage,” Kennedy said.

To do so, Kennedy delved into a number of personal anecdotes, including the story of his time on the popular television trivia game show, “Jeopardy!” Getting on the show was a struggle enough, Kennedy said, requiring three auditions and a skipped visit to his in-laws before he was finally selected to be one of the contestants. However, once on “Jeopardy!” Kennedy won two shows in a row and, at one point mid-competition, made a notable comeback by rising from $600 to $4,400 in one go.

Edrick Sarkissian, a UCSB alum who graduated last year with a degree in linguistics, said he previously took a few of Kennedy’s classes and thought of the professor as skilled in delivering relatable and engaging lectures. In this light, Sarkissian said the last lecture was a special treat, as he got to know more about the professor’s experiences through his own words.

“It was neat because he’s someone I’ve always looked up to as a professor, and it was cool to get this insider view of his life,” Sarkissian said. “I know he talked a lot about ‘Jeopardy!’ but that is something that comes up in class a lot, so it was really neat to actually get the whole ‘Jeopardy!’ story first-hand from Kennedy, rather than from teaching assistants.”

Of course, Kennedy took a few moments to teach the audience a bit about linguistics, diving into what he called the “fake rules” of grammar, such as not ending a sentence with a preposition and referring to one person as “they” or using “literally” to mean “figuratively.” Kennedy also brought up how certain people have a tendency to make judgments about those who make the aforementioned grammatical errors.

As for other topics discussed within the lecture, Kennedy talked about how language can sometimes be used to justify injustice, how misogyny is often masked as linguistic critique of women’s high pitch and why there is a tendency for people to say the filler word “like” so often. He also touched on the negative stereotypes mapped onto people who speak “African American English” and differences between English and languages rarely spoken today, such as Chumash — which uses a base-four counting system —and Guugu Yimithirr, which incorporates cardinal directions into everyday speech.

Sarah Luchetta, a first-year English and linguistics double major who took Linguistics 20 with Kennedy last quarter, said she thinks Kennedy is “a really cool dude” who sent a “really good message” about following one’s dreams, especially in light of the current job market for college graduates.

“I feel like a lot of people are so worried they have to be a part of a STEM [science, technology, engineering and mathematics] major or econ, or something they will for sure get a job in,” Luchetta said. “Your chances are a lot better off if you’re doing something that you really care about, because then you’ll work that much harder to get a job in that field.”

Olivia Nemec, a first-year undeclared major, said the lecture felt very relevant to her as a student who has yet to pick out a focused field of study.

“It was really funny; it was really engaging,” Nemec said. “I really think it was inspiring because it was for people who don’t know what they want to do, kind of like me … it felt really motivational.” 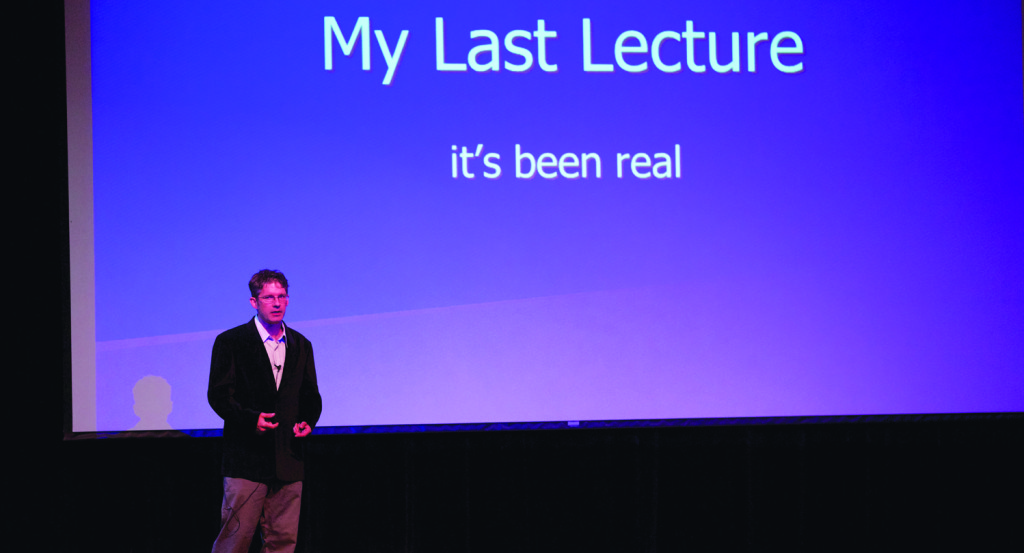 Professor Kennedy discussed how language can be used to rationalize injustices, among other topics.

A version of this story appeared on page 3 of Thursday, February 27, 2014’s print edition of the Daily Nexus.