Dozens of teachers from around the country gathered at UCSB’s Kavli Institute for Theoretical Physics (KITP) to participate in “The Physics of Flocking: From Cells to Crowds,” a full-day workshop for high school science educators to become better acquainted with the realms of physics and academic science.

The Feb. 15 annual event aimed to inform teachers on how to take concepts learned at the conference and translate them to classroom environments for more effectual learning at the high school level.

The conference consisted of four talks from top physics researchers, each designed to introduce the teachers to the concept ‘collective animal behavior’ ­— collective flock and swarm phenomena in biology — as illustrated through fundamental principles drawn from physics, biology and math.

One of the conference’s speakers this year was Syracuse University physics professor Cristina Marchetti, lead coordinator for the program and the Teachers’ Conference.

According to Marchetti, active matter refers to a novel class of non-equilibrium systems composed of many interacting units or particles that individually consume energy and collectively generate coherent motion at large scales.

“A simple example of an active system is a suspension of swimming bacteria. Each individual bacterium is an active particle that propels itself through a fluid or other medium by consuming nutrients,” Marchetti said. “A dense swarm of bacteria behaves collectively as a living fluid and can self-organize in complex regular patterns, exhibit motion or freeze into a solid-like biofilm.”

A collection of interacting entities that exhibit large-scale spatial or temporal organization in a state with novel macroscopic properties also occurs in inanimate matter, as seen in the transition of water to ice. This type of emergent behavior acquires a new ‘unexplored richness’ in active systems that are tuned by energy generated internally by each unit.

“Active systems span an enormous range of length scales,” Marchetti said. “From the cytoskeleton of living cells to bacterial suspensions, tissues and organisms to animal groups such as bird flocks, fish schools and insect swarms.”

Other presenters included Harvey Mudd department of mathematics chair Andrew Bernoff, who demonstrated synchrony using metronomes atop a board resting on two empty soda cans, Tufts University assistant professor of mechanical engineering Jeffrey Guasto, who revealed how single-tailed marine bacteria and sperm changed directions using their tails and group leader at Spain’s Institute for Bioengineering of Catalonia Xavier Trepat, who talked about mechanical forces in cells, which has implications in understanding wound healing, morphogenesis and collective cell invasion in cancer.

According to KITP deputy director and physics professor Greg Huber, the majority of attendees claimed they would incorporate themes learned from the event into their teaching.

“The teachers’ feedback was overwhelmingly positive,” Huber said. “I think only one teacher said that this material would not, one way or another, end up in their classrooms.” 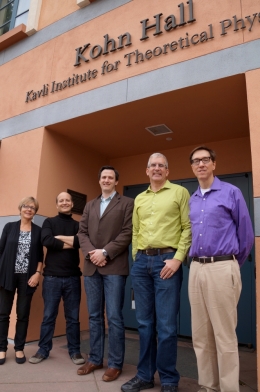 A version of this story appeared on page 11 of Wednesday, February 26, 2014’s print edition of the Daily Nexus.