Comedy, Demonstrations and Forums To Be Held to Celebrate the Black Community

In honor of Black History Month, the Black Student Union is hosting, promoting and cosponsoring several events this month that will educate students on the history of the African diaspora, particularly sections of this history that are often ignored by mainstream history curricula.

Some of the events scheduled for the month include the Hub’s Comedy Night, the annual Facing Race Conference and a demonstration commemorating the death of Trayvon Martin, a 17-year-old African American whose murder in February 2012 spurred national debate on racial profiling. However, the organization will also be further promoting some of their regular events, including Black Wednesday and the Black Caucus.

According to BSU Outreach co-chair Terron Wilkerson, Black History Month provides a time for reflective celebration of black culture and community. Wilkerson said that with a meager population of just 500 black students at UCSB, there may be individuals who do not realize the presence of the campus’s black student population.

“It is concerning for me that there are black people who don’t know that there are other black students on campus … We walk around and we don’t really know each other, and we have to make an extensive effort,” Wilkerson said. “Black History Month is a time we can all come together.”

On Feb. 28, the organization will host a Comedy Night at the Hub, which will feature multiple comedians — including UCSB alum and comedian Chinedu Unaka, a Los Angeles-based comedian who was featured in the national contest NBC’s Stand-Up for Diversity 2013. Funds from Comedy Night will be donated to Child Abuse Listening Mediation, a local charity that works to evaluate and prevent child abuse as well as aid families dealing with the issue.

According to BSU Co-Chair Lisa Berry, the Comedy Night — which will have a beer garden — will invite students to enjoy entertainment while also participating in a good cause.

“We figured it would be a fun way to raise funds and have everyone come out enjoy a little beer and some comedy,” Berry said.

In addition, BSU will also be heavily involved in the annual Facing Race Conference, an event organized by Student Commission on Racial Equality. This year, the event is themed “Fighting Racism from Within: Reconstructing Self-Hate into Self-Love,” and attendees can expect to receive free snacks and t-shirts.

In memory of the tragic and controversial murder of Trayvon Martin, BSU will take part in a silent demonstration that is currently being coordinated by the larger Afrikan Black Coalition, which is comprised of all BSU campus organizations UC-wide.

BSU co-chair Alexis Wright said in order to participate in the demonstration, students will wear hoodies in a show of solidarity with Trayvon Martin. According to Wright, wearing a hoodie on campus throughout the day, especially in light of the small percentage of black students on the UCSB campus, will act as a powerful message for the campus community.

“[It] is going to act as a political statement for our community, raising awareness of issues we deal with, such as racial profiling and the consequences of racial profiling as shown by the Trayvon Martin case,” Wright said. “We’ll being doing that in honor of his story and what happened to him, but on a greater scale, in honor of all the martyrs who have died because of their skin color.”

While Comedy Night, the Facing Race Conference and the Trayvon Martin demonstration make up the three larger BSU events for the month, the organization is also hosting their usual set of smaller events.

Black Wednesday, for example, occurs twice a month and provides an opportunity for black students to congregate in the Arbor to showcase diversity through activities and performances such as music and dance. According to Berry, the event follows a long-standing tradition started in 1970 by students who were looking to foster a strong black community on campus.

“We go out into the Arbor, we play music, we dance, we sell stuff,” Berry said. “We predominantly use it to make our presence known on campus and help raise funds.”

Wright said Black Wednesday also gives involved students a genuine sense of community, as she described it as a sort of “party scene on school.”

“We usually utilize it for black students during our week to come together and have fun,” Wright said. “We get together and dance and stuff like that. We usually have them dress in all black.”

Another regular BSU event — the Black Caucus — is a weekly open forum for students to discuss issues they find important to their community. Recently, the event has featured psychologists so students can interact and converse with these professionals.

“[We] talk about general feelings in the org, or our interactions between one another — even something that happened in the media that we want to talk about that we feel that is affecting us,” Wright said. “The two psychologists [that] we hired as a part of our demands initiative we are actually bringing in to facilitate a healing aspect.”

With the wide range of events being planned this month, Wright said BSU hopes each one will contribute to the understanding and celebration of the achievements of Black Americans throughout history.

“This Black History Month is pretty big for us. We tried to really pack the calendar this month to showcase all the different aspects of our culture, our community and things like that,” Wright said. “The events are so different, but the one commonality is black culture, black experience. We’re welcoming everyone to the events and we’re excited to see people come.” 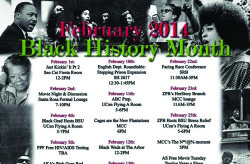 A version of this story appeared on page 5 of Thursday, February 13, 2014’s print edition of the Daily Nexus.