The San Miguel Residence Hall is the host of an exciting art show featuring the work of Diane Gamboa. “Art & Altered States” opened last Sunday. Tonight, starting at 7 p.m, guests are welcomed to attend the closing reception in the San Miguel Formal Lounge where they can enjoy the 12 screen prints on display and make screen prints of their own.

Gamboa is a Los Angeles-based artist who began her career photographing East L.A.’s punk rock scene in the ’80s after getting a B.A. from Otis College of Art and Design. Her work has progressed through the last three decades, roaming from photos, drawings and prints to disposable fashion, usually with an emphasis on urban environments and alternative culture.

A celebrated feminist and Chicana artist, Gamboa spoke at Campbell Hall last fall as a Regents’ Lecturer in the Department of Black Studies. She walked viewers through her visual history with an emphasis on the role that music has played both in her work and in the communities that inspire her.

In conjunction with her talk, these same prints were exhibited at UCSB’s Davidson Library from October to December of 2013. The works, made between 1983 to 2009, show Gamboa’s continued exploration of marginalized communities as they highlight common social constructions. The provocative, ornate images of tattooed bodies, scenes of domination and exaggerated physicality were lent to Housing & Residential Services by Davidson’s Special Collections for this special show. The library’s California Ethnic and Multicultural Archives (CEMA) have collaborated with the residential halls in order to expose students to Gamboa’s poignant pieces.

If you would like to experience several fascinating artworks and possibly make some prints of your own (you can bring t-shirts and more to print on if you like), head over to the San Miguel Formal Lounge tonight for a unique evening of art on campus. 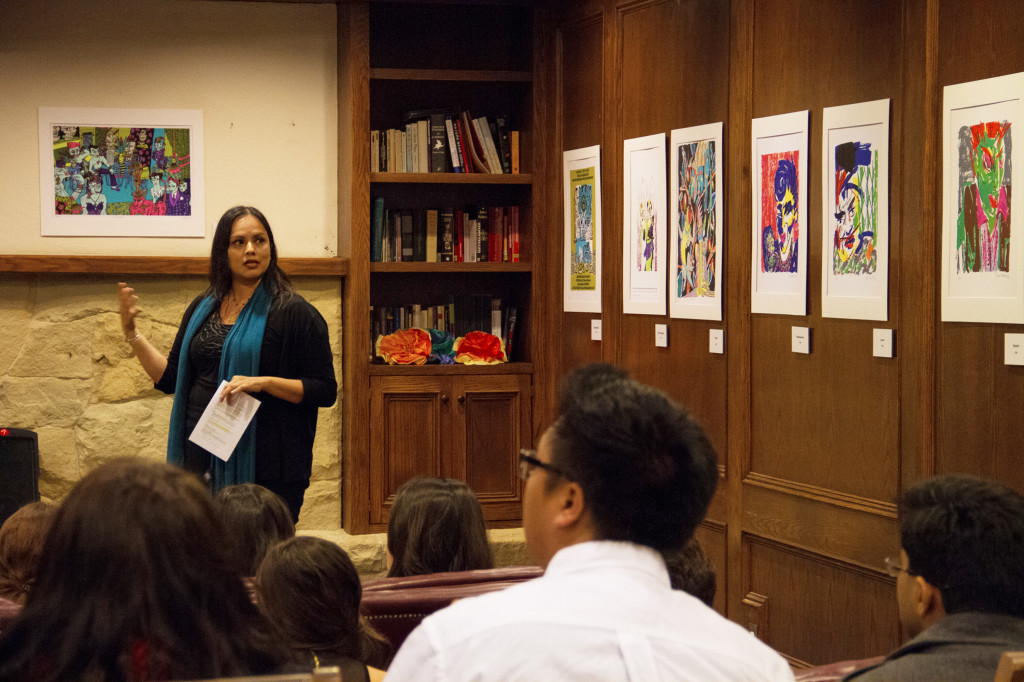 A show featuring the work of L.A.-based Diane Gamboa (on loan from Davidson Library’s CEMA), “Art & Altered States” opened last Sunday at the San Miguel Residence Hall. About 50 attendees enjoyed the 12 prints on display and a talk by Cristina Serna of the Chicano Studies Department. The show closes tonight after a final reception.

A version of this story appeared on page 9 of Thursday, February 13, 2014’s print edition of the Daily Nexus.