The Daily Nexus
News
Mermaid Activists Dive Into UCSB
February 13, 2014 at 5:00 am by Jackson Kerr

Save the Mermaids, a Santa Barbara-based environmental activism organization focused on beach and ocean clean-up, is working to establish a chapter on campus at UCSB.

The group, which refers to itself as “ambassadors to the sea,” aims to educate their communities about the harms of plastic bags, fossil fuels and other threats to the environment. Founded by former UCSB students, Save the Mermaids advocates environmental reform through legislation, such as pushing for a ban on plastic bags in Santa Barbara and raising money for outreach programs by selling merchandise.

UCSB graduate Kaia Stachel- Zambryski, executive director of Save the Mermaids and co-chair of the Board of Directors, said although the organization has never had a university chapter, it makes sense for UCSB to be the first, given the group’s roots in the school.

UCSB Save the Mermaids Founding Board Member Jenny Bakos, a fourth-year anthropology major and internship coordinator for the university’s American Marketing Association chapter, said the AMA has been influential in establishing a UCSB branch of Save the Mermaids due to their history of working with the main Santa Barbara branch.

“One of my responsibilities is to seek individual and team-based internships for our organization’s members to participate in through collaboration of Santa Barbara-based businesses and nonprofits,” Bakos said. “I have always wanted to work with Save the Mermaids and finally as a senior, we are doing just that.”

Although Save the Mermaids has been active in Santa Barbara since 2009, Bakos said a presence on UCSB’s campus has been one of the organization’s goals for a long time.

“One of Save the Mermaids biggest objectives was to create an on-campus presence at UCSB,” Bakos said, “So by working with their pre-existing interns, finding support through the SBCC Save the Mermaids chapter, and our AMA interns, we are working to meet that goal.”

While the process to establish a campus chapter is still ongoing, Bakos said preliminary members have been holding various events that continue throughout the remainder of the school year.

“We have a lot of great UCSB Farmer’s Market tabling events, beach clean-ups, and movie screenings in the works,” Bakos said.

The American Marketing Association, whose campus chapter is headed by fourth-year communication major, President Christina Collins, works to connect students of all majors to various internships in the marketing field.

According to Collins, membership in Save the Mermaids would provide valuable experience to students interested in marketing work.

“Our interns are bright, motivated students who are looking to gain hands-on experience and being a part of Save the Mermaids also allows them to participate in community service and spreading the word of a good cause,” Collins said.

AMA members have helped the organization’s main Santa Barbara chapter on several projects in the past, especially with promotion. According to Collins, interns have been helping create a beach clean-up day, establishing an online presence through a Facebook page and hosting a movie screening night.

“Because AMA is so new and has been able to grow exponentially in the past two years, it is exciting to know that our members will also be a part in helping another organization … become an established student organization with their marketing skills,” Collins said.

In the future, Stachel-Zambryski said Save the Mermaids plans to continue hosting events on campus and elsewhere, many of which involve college students, noting participation from students seems natural. 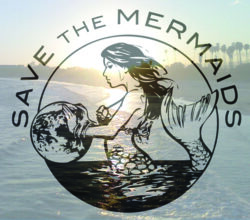 Save the Mermaids, founded by former UCSB students, works to bring attention to issues of ocean and environment in a creative manner.

A version of this story appeared on page 3 of Thursday, February 13, 2014’s print edition of the Daily Nexus.

Are there branch offices?
What about education? How do we desegragate. Carmel school had issues in educating my grandmeres if they did not have pinkish skin. I get threats if i bring them home. Where are the orgs. For mere rights.

Where are branch offices and support groups for mere rights and desegragation, especially in education and housing.