The UCSB Women, Gender and Sexual Equity Program (WGSE) hosted an informational seminar titled “Beyond the Condom” last night, educating students on all the necessary tools and resources for safer sex, particularly in non-heteronormative settings.

The event featured a breakdown of adult toys and safe sex measures for sexual practices outside of penis-vaginal intercourse, as well as tips on correct usage of a condom. Attendees were also treated to an explanation of the proper uses and benefits of sex toys as well as advice for communicating with partners about safe sex and the inside scoop on what adult stores are queer-friendly.

The event was intended to be particularly inclusive of members of the LGBT community, as it touched on sexual practices beyond just penis-vaginal intercourse, according to Richard Moreno, a WGSE student coordinator and third-year communication major who helped to organize the event.

“Anybody can engage in safer sex practices if they choose to do so, but [the event] was more inclined to those who do engage in non-heteronormative sexual activities,” Moreno said.

“In terms of talking about safer sex for queer-identified people, I think that most sex education is focused on heterosexual sex, and that leaves out a whole range of not only pleasure options, but also ways that people can keep each other safe,” Crutcher said. “I think it’s really important for people to talk about queer sex specifically and not just assume that one size fits all when it comes to sex education.”

In explaining the variety of sex toys featured at the seminar, Crutcher detailed which brands are the safest and most sanitary to use. According to Crutcher, talking about toys is not “just a frivolous pleasure thing” but rather an important space for conversation, with a positive effect on sexual health.

Crutcher said her most important advice for students is to use lots of lubrication to prevent micro-abrasions in the vagina or anus. She also recommended students explore safer sex options, communicate with their partners and learn how to be smart consumers when it comes to sex toys.

Karla Cortez, a fourth-year environmental studies major, said she found the event educational and insightful for how it addressed commonly held perceptions about toys and what their actual usages are.

“Everyone stigmatizes sex toys, but it’s actually a great way for you and your partner to explore,” Cortez said. 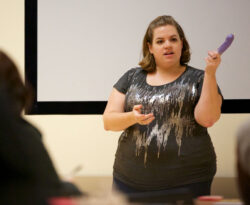 The proper use and benefits of sex toys were demonstrated
at “Beyond the Condom,” a didactic seminar hosted by WGSE.

A version of this story appeared on page 1 of Wednesday, February 12, 2014’s print edition of the Daily Nexus.