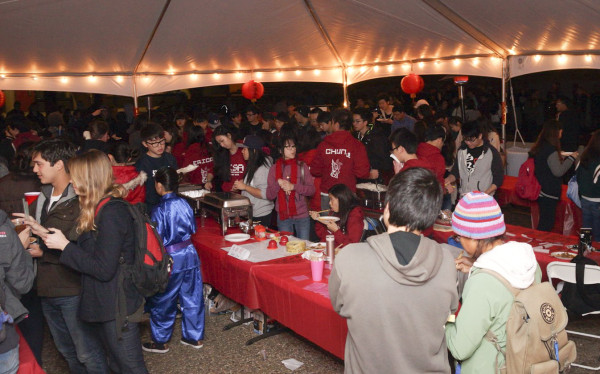 The event offered attendees various traditional dishes free of charge — from kimchi pancakes and kung pao chicken to spicy tofu and Mongolian beef — and all of it was alongside a colorful presentation of games, prizes and twilight performances of music and dance.

According to Ricky Thang, the president of HKSA and a fourth-year philosophy major and, the event’s purpose was held to usher in the Lunar New Year for students in a fairly traditional manner.

“What we want to do is accomplish an authentic East Asian feel, kind of like a street market with the food, the decorations and the music,” Thang said. “As you can tell, the music is outdated and that’s just the way we like it.”

While the Lunar New Year began Jan. 31, fourth-year communication major and HKSA Public Relations Chair Jessica Hu said the organization decided against hosting it on that day due to exam dates and family reunions.

“A lot of students had midterms last week, and a lot go back to their families on the actual Lunar New Year day,” Hu said.

In addition, the celebration saw special kung fu and traditional Chinese dance routines by the Sino West Kung Fu and Dance Team, which featured both child and adult performers dressed in brightly colored garb. According to Thang, the Sino West team provided a fun alternative to the typical dragon dances that occur during the Lunar New Year festivals.

“We went to the local Chinese school to see if they would do a dragon dance because that’s what they do every year. But then, this year they couldn’t do it; so one of my members just went driving around until he found a Chinese dance school … that’s how we ended up finding the Sino West Kung Fu and Dance Team.”

Ping Hsu, a fourth-year computer science major and TASA Vice President, said the organization chose to attend the event with the intention of both supporting the HKSA and reveling in Lunar New Year traditions.

“We have joint events with the HKSA all the time, so they invited us to be here for the Lunar New Year celebrations,” Hsu said. “We just want to promote Asian culture as a whole.”

Emily Hicks, a second-year Japanese major, said despite the business and packed nature of the event, the food offered drew her in and made her want to stay.

“I think the event is crowded, but it’s fun. The food is really good,” Hicks said. “The kimchi pancakes are good, and they had a really good tofu thing.”

Second-year sociology and feminist studies double major Ricardo Duarte said the celebration’s lights, atmosphere and liveliness as a whole made the event enjoyable.

“This event is poppin’,” Duarte said.