Associated Students President Jonathan Abboud vetoed an official A.S. logo passed by the A.S. Senate last week, claiming that the process of establishing the logo was not “inclusive” enough of the student body.

The logo was part of a resolution authored by senators Ali Guthy and Beatrice Contreras that established both an official A.S. logo and an official Senate logo in order to “increase the overall visibility of the association.” However, Abboud sent out a press release on Saturday announcing his veto decision, specifying that the process of passing the logo contained “a lack of inclusive decision-making.”

According to the press release, Abboud said A.S. is “in need of a major image upgrade stylistically,” but “all who participate in the activities of Associated Students” should be able to take part in the process of that upgrade. He urged the Senate to publicly solicit contributions for logo ideas and then encourage all “A.S. entities to make their opinions known.”

The logo issue hit close to home for Abboud, as he said all students should be able to be a part of the incredible projects and events of A.S.

“I believe each and every person in A.S. and even the student body should have had a chance to submit designs and submit their opinion,” Abboud said in an email.

Contreras said that while she understands the president’s rationale, she hopes the matter will be resolved quickly, as the Senate has already devoted ample time to the deliberation.

“President Abboud said that he wasn’t comfortable with the outreach efforts, and I feel that this was a reasonable argument,” Contreras said. “But the Senate had been deliberating on the logo for weeks and very few people voiced concerns, so it didn’t seem like anyone was openly opposed to the change.” 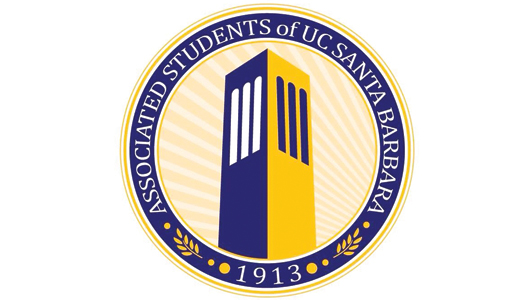 Although the new logo (above) passed through Senate without opposition, it was vetoed by President Abboud.

A version of this story appeared on page 3 of Thursday, February 6, 2014’s print edition of the Daily Nexus.