Students and faculty filled the MultiCultural Center Theatre yesterday night to hear a discussion led by Chicana playwright Josefina Lopez and watch her film Detained in the Desert.

Lopez is most known for her plays focusing on the struggles faced by Chicano and feminist communities and was brought to UCSB due to the presence of her work in various classes. The screening of the film was sponsored by the Latin American and Iberian Studies and Film Studies departments, among other organizations.

Detained in the Desert tells the story of Sandi, a Mexican-American woman who is racially profiled and detained while traveling near the U.S.-Mexican border in Arizona, despite the fact that she is an American citizen. Sandi’s boyfriend, an undocumented immigrant from Canada, is not questioned by the authorities.

Lopez said her inspiration for the screenplay came from her own experiences as a Chicana citizen in America. Lopez said one of her goals with the film was to show the role racial profiling plays in today’s society, using the contrasting experiences of Sandi and her boyfriend to illustrate the ambiguous nature of American identity.

“Oftentimes, the border patrol racially profiles people because of their skin color, or in other words, people who look ‘undocumented,’” Lopez said. “But then I thought how do they identify undocumented whites? I’ve been around whites who are undocumented and trust me, they don’t have to hide it the way that I have.”

Lopez said that the fictional film does contain many scenes and situations that are based on real events viewers often have trouble accepting as true.

“Even though it is a fictitious story, a lot of events in this movie are real,” said Lopez, “A lot of people don’t want to believe that they are, and then I tell them ‘Do you want me to bring up the newspaper clippings?”

Theater and Dance professor Carlos Morton said he uses Lopez’s films and plays in his classes, adding that he wanted to expose more students to her work.

“I teach her work in my classes, and I know her work very well,” Morton said. “When I saw that she had just come out with a new feature film, I said we have to bring it here so students can see it.”

Third-year political science major Linda Gonzalez said she appreciates Lopez’s work and is optimistic about the increasing awareness of immigration issues that the film creates.

“I took away a great appreciation for people like Josefina Lopez, for making it her responsibility to challenge controversial issues in her art,” said Gonzalez. “It’s really difficult to expose oneself to issues like immigration and border-crossing death without feeling devastated and frustrated. After watching this film, I feel more optimistic about this issue.” 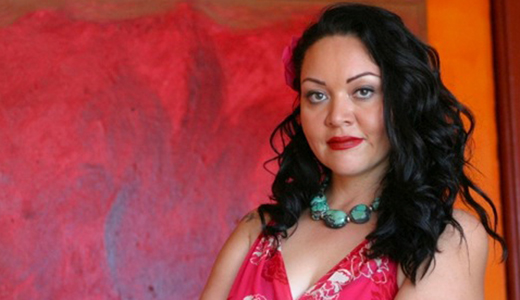 Josefina Lopez, above, based “Detained in the Desert” on her own personal experiences.

A version of this story appeared on page 5 of Thursday, February 6, 2014’s print edition of the Daily Nexus.