The Daily Nexus
News
This Connection Won’t Evaporate
January 27, 2014 at 1:58 am by Aditya Tadanki 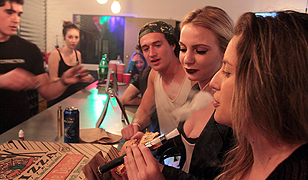 Vapor bar and e-cigarette lounge Vapor Connection officially joined the Isla Vista community on Saturday with a Grand Opening event that featured a live DJ and the store’s selection of over 80 different flavors of smokeless water vapor.

Located at 900 Embarcadero Del Mar, upstairs from Silvergreens Restaurant, the store is a retailer of rechargeable e-cigarette and vaporizer products, which are branded by the company as a healthier alternative to regular cigarettes. Customers can walk into the store and smoke different flavors free of charge, as the store makes its revenue through the sales of starter kits and e-juice bottles. With the original Vapor Connection having opened in Thousand Oaks in March 2013, the fairly new company seeks to help customers quit smoking and connect with other members of the vapor community.

Katrine Turner, a store employee who has also worked at the Thousand Oaks location, said vaping has more benefits and less health risk, in comparison to regular tobacco cigarettes. Turner said vaping is also much cheaper than smoking regular cigarettes, as starter kits — which range from $65 to $80 each — are a one-time purchase. These kits generally contain a vapor pen, a case, a USB charger, two batteries, one tank to hold e-juice and one cartomizer for vapor production. Beside the kit, there is a replaceable piece, which is switched out once a month that costs just $2. Bottles of flavored juice cost from $10 to $30, and each bottle of juice has three refills, while one e-cig tank is equivalent to about one pack of cigarettes.

While explaining the healthier elements of vaping, Turner said the nicotine content of smokeless water vapor products is actually much lower than traditional cigarettes.

“I just want people to know that it’s a safer alternative,” Turner said. “It is getting a bad reputation because a lot of people are under the misconception that the highest nicotine level is smoking a whole pack of cigarettes; but in reality, it takes 50 milligrams of liquid just to get the same amount of nicotine from one cigarette.”

The highest nicotine level that Vapor Connection carries is 24 milligrams of nicotine per milliliter of liquid, while the lowest is six, according to Turner.

Jacob Cross, an employee at the I.V. store who focuses on general sales and juice testing, said e-cigarette devices are generally composed of three basic parts: a rechargeable battery, a cartridge or tank containing e-juice and a heating element usually referred to as a cartomizer or atomizer that heats the e-juice into a cloud of vapor that can then be inhaled by the user. E-juice is a liquid solution of nicotine and either propylene glycol or vegetable glycerin employed in e-cigarette and vaping devices.

Cross said the lounge opened up its doors three weeks ago, before holding its official grand opening, and has been running smoothly thus far.

Turner said while the majority of Vapor Connection customers are students, the shop has serviced a number of people from outside I.V. due to its unique existence as one of the few local vapor shops in the Santa Barbara County.

“People just really like it here,” Cross said. “They … like having a place to hang out and sample juices. It’s a nice environment.”

According to Turner, student reception for the shop has been fairly positive, with customers praising the store for its services such as free juice sampling and free Wi-Fi. Despite the positive comments, however, Turner said the shop has garnered criticism from members of the university and surrounding community.

“The reception has been kind of mixed,” Turner said. “Among the students, it has been really popular, but there have been some comments here and there from, I believe, faculty members and other authoritative figures. But other than that, it’s been good.”

Preston Colbo, a first-year student at Santa Barbara City College, said he decided to check out Vapor Connection after reading about the shop in a magazine and receiving a recommendation from “a dude at the smoke shop Precious Slut.”

“It’s tight. I’m so stoked that something like this is open in Isla Vista now,” Colbo said. “I just had pens initially, and then one of my coworkers who’s into big sub-ohm vaping introduced me, and I tried some of his stuff.”

A version of this article appeared on page 3 of January 27rd’s print edition of the Daily Nexus.

Yes I agree that using E Cigarette as an alternative way not only helps to quit smoking but also with one time cost of just 65$ it saves huge amount from my monthly earnings as compared to tobacco sticks.

Unfortunately E Cigarettes have been banned on campus. Go figure?

Congratulations on your new lounge!
For folks new to the concept, here are some links:
http://casaa.org/e-cigarettes.html

On Facebook, there are several groups providing social and practical help. Vapers Helping Vapers is a welcoming place to start.

for straight up vaping activism: http://vapingmilitia.wildapricot.org/

As an alum, I’m glad to see that IV has it’s own vape shop now. It’s a great way for smokers to quit. Just a shame that the school can’t see it. I guess they think all that second hand smoke from people smoking while biking is better than some odorless vapor.