This coming March UCSB Earth Science professor Cathy Busby will lead a group of over 50 scientists on an expedition off the coast of Japan to discover more about how continents form. The expedition will take place at the site of the Izu-Bonin Arc, a boundary extending over 2,800 kilometers from Tokyo, Japan to beyond Guam.

“Subduction is the concept by which oceanographic plates are returned to the manhole,” Busby said.

Though it is known that continents form where subduction occurs, it has yet to be discovered how continents form. Busby’s team will seek the answers of continental formation through studying the underwater volcanoes abundant throughout the arc.

“Our main purpose is to understand the volcanoes that we know generally form by the subduction process,” Busby said. “When the seafloor goes down to the manhole, that triggers melting in the plate above it and that creates volcanoes above the plate of the sinking floor.”

The Izu-Bonin Arc is an ideal location to study how the process can create new continental crust because subduction is still active. Subduction has occurred in other places of the earth but is no longer active in most sites. The older the rocks become, the harder it is to figure how they are born.

According to Busby, the arc’s stability and relatively soft seabed makes it an ideal site for research.

“The rocks are not going to be very hard rocks and so it will not take as much time to drill them and the sediments are well connected,” Busby said. “The core will hold well and will not collapse.”

Since the process of subduction giving rise to continental crust happens underwater, going below the water to study the process gives a more accurate understanding of how the process occurs than when studying it on land.

Scientists have previously dragged dredges on the surface of the seafloor to understand what is below the seabed. Seismic surveys, in which layers are characterized by their seismic properties, have also given insight into seabed properties.

The only way to truly find out what is underneath the surface, however, is by actually drilling through it. Busby’s expedition in March will be the first of three trips into the same area. 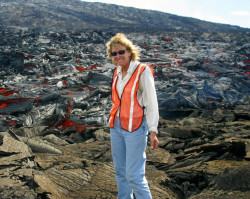 Cathy Busby, pictured by a lava flow in Hawaii, will lead a depth record for undersea drilling.

A version of this story appeared on page 6 of Wednesday, January 22nd, 2014’s print edition of the Daily Nexus.