Renowned artist, current UC Davis professor and activist Malaquias Montoya gave a presentation last night at the MultiCultural Center Theater discussing his social activism-inspired artwork and giving an autobiographical account of his upbringing as the member of a migrant farming family.

Entitled “The Voice of the Voiceless: the Social Responsibility of the Artist,” the event featured the work and life of Montoya, who has received notoriety internationally for his work. Known for its ties to social justice, Montoya’s artwork has been shown in galleries and museums around the world, including the San Francisco Art Institute, The Guadalupe Cultural Arts Center in San Antonio and the Neuen Gesellschaft für Bildende Kunst in Berlin. Montoya also founded the Mexican-American Liberation Art Front in 1968, which he said was aimed at “organizing Chicano artists who are interested in integrating art into the Chicano social revolution sweeping the country” during the 1960s and 70s.

During his presentation, Montoya told the audience about his background as a Chicano American who struggled early in elementary school because of his unfamiliarity with the English language. Montoya said he was put in a disadvantaged class where the students spent most of their time drawing pictures, and he attributes this class to his early beginnings of an artist.

“For a whole year in that class, all we did was draw,” Montoya said. “But I got really good at it, and I built up some self-esteem.”

The well-respected artist said that it was during his college years — in what he calls the liberal environment of UC Berkeley — that enabled him to freely express his Chicano heritage.

“As soon as I went to Berkeley, all of a sudden I felt proud of who I was: I could look in the mirror and say ‘that’s me.’ I no longer wanted to be white and I was no longer ashamed of that accent I had,” Montoya said. “It was incredible.”

According to Montoya, Hispanic Americans during the time of his studies at Berkeley had trouble finding their identity while in the midst of struggling each day being poor, politically inactive farm workers. However, as Montoya became active in college, he and other Hispanic Americans rallied around the idea of being “Chicano.”

“We didn’t know who we were,” Montoya said. “There was no Mexican American studies; there was no Chicano studies. Everything that we did, we had to come up with. One day, we woke up to say ‘Yo soy Chicano,’ and it was just so wonderful to say ‘I am a Chicano.’”

Montoya’s works include pieces on the idea of Chicano identity, deportations, the Vietnam War and the complications of American Patriotism. One piece shown was a dark charcoal drawing of a man who is wrapped in an American flag and bound with wire. It is one of many that are titled “An Immigrant’s Dream, the American Response,” which Montoya said symbolizes America’s poor treatment of immigrant workers who seek the ‘American Dream.’

According to third-year zoology student Canhnghi Ta, the style of Montoya’s work, aside from “being beautiful,” gives a voice to every individual who suffers the plight of political and social injustices worldwide.

“The style and the way Montoya creates his art really expresses the plight and hardship of not just Chicano Americans, but people of all different backgrounds who are fighting discrimination,” Ta said. “It is truly inspiring.” 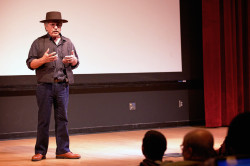 Despite being placed in a disadvantaged class in elementary school, Montoya later attended UC Berkeley, formed the Mexican-American Liberation Art Front and has had his artwork shown in galleries around the world.

A version of this story appeared on page 1 of Wednesday, January 22nd, 2014’s print edition of the Daily Nexus.