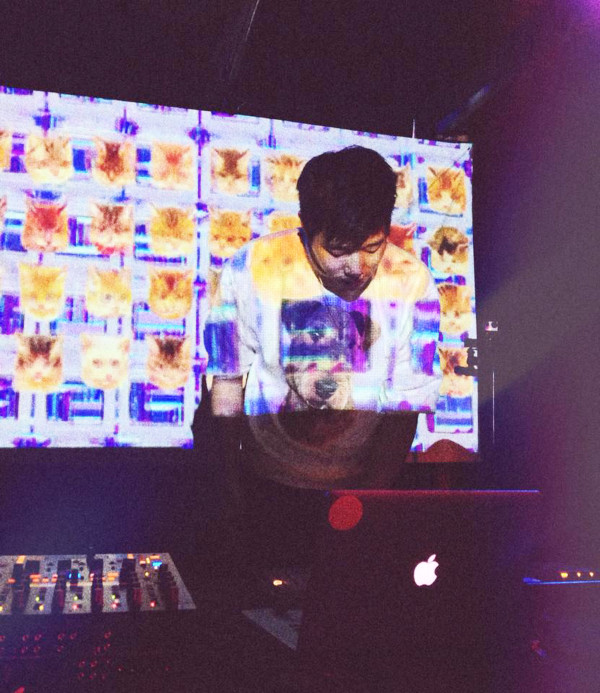 Giraffage brought his unique spin on soulful R&B, hip hop and disco to a packed SOhO through an event hosted by local music bloggers We The Beat and Speak Volumes.

The Bay Area’s very own Charlie Yin, famously known as Giraffage, brought the heat to SOhO’s normally folksy atmosphere last Thursday night. The sold out show was packed with grown folk, college kids and molly-crazed high schoolers ready for the turn up. The show was hosted by Santa Barbara-bred music promotion company We the Beat in partnership with the music blog comprised by our own fellow UCSB students, Speak Volumes. Opening the show were future Low End Theory resident DJ Cub’b and the “producer extraordinaire” Underbelly.

Before the show, I had the pleasure of interviewing Cub’b (government name Chris Cubbison) at his studio/humble abode. We discussed his inspirations and aspirations, our hopeful futures in ghost-producing, how “fake” L.A. is, and I watched him jam out and play a bunch of moneymakers he’s been sitting on. It was pretty lengthy interview but here’s an excerpt:

VE: How did Cub’b as we all know it begin?

CC: I started making music to be a part of the jams, be a part of the music that was happening with my friends. I [have] just been working on my own stuff since 2011 … It’s been a really good process and I’ve been learning and teaching myself since then.

VE: What makes you different from all the other beat scene kids right now?

CC: As with anybody that works with sample-based music…it really depends on what you’re sampling … It kind of makes and determines your sound. If you’re pulling from records that people are always listening to then you run the risk of sounding like everybody else. My goal is to pull from very obscure sources and kind of muddy them and change their sound … A lot of the time, I’ll be walking around somewhere and I’ll hear a cool sound and I’ll just pull out my iPhone and record it … Nothing’s off limits when it comes to sampling because – I don’t know – there’s such a plethora of great noises out there. There’s an infinite amount which means that if you’re pulling from this resource that’s limitless, then you can really make anything from that.

VE: With that, what inspires you? Life?

VE: What’s your process when creating a new track?

CC: I don’t really have one way to make a song. It kind of changes every single time.

VE: Yeah, don’t put yourself in a box man.

CC: Yeah, exactly. So I mean, I’m a fan of variety and at this point, I’m still figuring out what my sound is because it feels like it’s always changing depending on where I am or what I’m doing.

VE: What artist would you say you try to emulate?

CC: Matthewdavid (co-founder of Leaving Records)… He’s a really interesting guy. He strikes me as someone whose music embodies who he is…. It feels very authentic and I think that’s a goal [for me].

VE: Don’t sell out. So in 2014, how are you trying to differentiate yourself?

CC: I have a lot more material I’ve been sitting on for a long time, so I’m going to release that. After graduation, I’m planning on moving to L.A. with my friends and starting fresh there.

Starting off the show, the born-Taurus took the stage ready in full effect —jacket off with the thick gold chain. In other words, Cub’b don’t play. His sound is experimental to say the least as compared to the other acts, but that made it a better show. His skill with MIDI samplers/instruments did not go unnoticed. The high schoolers around me twirled and “danced” (if that’s what you call it), further adding to the entertainment. The biggest surprise of his set though was his rapping. Notorious V.I.C. got a bit insecure for a second there.

Underbelly, also known as young-old soul Timmy Linetsky, took the stage next to a pumped crowd. He wasted no time playing crowd favorites and remakes of old R&B jams during his DJ set. When he played an Aaliyah/Timbo “Are You That Somebody” remix, I could not contain my excitement. It also happened to be “baby girl’s” birthday, so it felt a bit more nostalgic than usual.

Just a freshman here at UCSB, Underbelly has already made waves on the electronic music scene.

Whereas most “DJs” nowadays just press play and fist pump (all diss to David Guetta), Underbelly made it a point to show that he is far from the average. Being a classically trained pianist, he showcased his skills, accompanying his song choices with the keys. Having witnessed his great improvisation skills firsthand, I can say you should find out more about this kid if you don’t know him already. Halfway through, I looked back and the crowd was in full swing. The energy was infectious. He closed his set with his remix of Lily Allen’s “Smile,” sparking a sing along.

The chanting began and Giraffage emerged from the shadows. His dream-pop electronica tunes with the crazy visuals (courtesy of Speak Volumes’ Jason Worden) had me entranced most of his set. It was a match made in Urban Outfitters heaven, magical cats and all. Typically, I’m not a fan per se, but the beats were banging. His album Comfort was at one point my sole finals week jam (definitely a recommended listen).

There’s no denying his gift of taking popular samples that we know and love and transforming them into his own. It wouldn’t be too far-fetched to call him one of the pioneers of this huge surge of bedroom producers and the rise of sensual R&B remixes in the past few years. The show was “all the way turnt up” to say the least. For the encore (there was no way we were leaving without one), the crowd was invited on stage to gig with him as he played his famed remix of the great Janet Jackson’s “Someone To Call My Lover.” A bit of debauchery ensued, but then, what’s a good Thursday night without it?

A version of this story appeared on page 8 of Thursday, January 23rd, 2014’s print edition of the Daily Nexus.