Associated Student Senate reconvened for the first meeting of the year last night, covering a wide range of topics including the University of California Student Association — or UCSA — budget, the new UCSB ban on smoking and an update on the status of the meningitis outbreak.

The meeting featured presentations by a wide range of campus officials and students representatives, such as UC Police Department saying there will be no penalty fines for smoking, a Student Affairs administrator giving updates on the meningitis outbreak and student officials discussing projects such as ongoing renovations to the UCen and an update on local city council decisions.

During the meeting, Police Chief Dustin Olson said campus police will not be issuing penalty fines to students who choose to smoke on campus, despite the new UCSB ban on smoking and all related projects — such as cigarettes, chewing tobacco and electronic cigarettes. Olson said cops cannot give out fines because the university does not have the power to enact such as law, making actual enforcement of the policy not necessarily legal.

“We encourage people to adhere to the policy, but we’re not written into the policy to have that role,” Olson said. “University doesn’t have the power to make law. Police officers work under the U.S. Constitution.”

The police chief also spoke about UCPD programs and activities for the year, highlighting the Rape Aggression Defense Class being taught this quarter and encouraging all students to participate in the program.

“It might be the only chance you get to punch and kick a cop,” Olson said.

He also emphasized the seriousness of the issue and importance of the program, calling campus safety the police force’s “utmost priority.”

In addition, Associate Dean of Student Life and Activities Katya Armistead delivered an update from UCSB’s medical staff regarding the meningitis outbreak and successful efforts to contain it.

“There have been no new cases,” Armistead said. “We had four, including one that was pretty serious.”

She also discussed a meningitis vaccine called Bexsero, which protects against the rare B strain of the bacterial disease and will be available at Student Health later this quarter, free of charge.

“We want everyone who has access to it, to go head and get it,” Armistead said. “The process will take several weeks.”

She also offered tips to students for staying safe and preventing the potential spread of new infections.

“Students need to be smart. They need to be washing their hands, they need to not have kissing booths,” Armistead said. “Beer pong, right now, is really not a good idea.”

A.S. President Jonathan Abboud reported on the status of the planned University Center renovations, explaining the expected benefits and costs to students.

“We will have a resource center for all environmental groups on campus,” Abboud said. “Health & Wellness will have a space on campus … veteran students will finally have a space that can fit more than three people in it.”

Abboud clarified that the costs of the renovations would be an annual amount of $20 per student until fiscal year 2018, which is when the cost will go up to $64 a year.

External Vice President of Statewide Affairs Alex Choate provided an executive report in which she issued updates about proposed changes to the UC Master Plan and advocated the passage of a controversial UCSA budget.

Other items covered at Wednesday’s meeting included a positive financial audit report on A.S. expenditures, sexual assault awareness program Take Back the Night and efforts to post A.S. Senate meetings on YouTube for students to view.

Food seemed to be the prevailing motif of the evening, as Chief Olson joked that officers would be more inclined to patrol the I.V. community center on Pardall if there were sugary rewards.

“I’ll tell you the secret. The secret is: have a doughnut or two around there.” 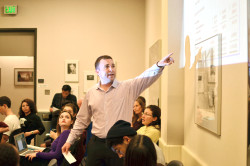 A version of this story appeared on page 3 of Thursday, January 9, 2014’s edition of the Daily Nexus.

Alex Choate is the External Vice President of Statewide Affairs.

And Alex Moore is the External Vice President of Local Affairs.