The Daily Nexus
Artsweek
Jeff Tweedy Breaks Hearts at the Granada
January 9, 2014 at 5:00 am by Emily Hunt

Although Wilco was in Santa Barbara less than a year ago at the Arlington Theatre, surrounded by the excitement and fanfare that now perpetually accompanies the iconic rock outfit, front man Jeff Tweedy returned to the Granada’s stage early in December, thanks to UCSB Arts & Lectures, to give a performance much more intimate and, perhaps, closer to the musician’s core.

The show’s opener, Scott McCaughey of The Young Fresh Fellows and The Minus 5, is apparently close with Tweedy, but his performance seemed to serve as a sort of jester show to keep people calm before the headliner, with the audience talking, coming and going as it pleased during the set.

Tweedy’s eventual appearance was made even more profound by contrast. Opening his 90-minute set with the Wilco classic “I Am Trying to Break Your Heart,” the once restless theater was still and silent. When Tweedy briefly stopped playing to let the audience collectively chant the song’s titular line, an atmosphere of both reverence and communal, good fun was created, which was indicative of Tweedy’s stage persona for his entire career.

Tweedy has become a master of his own stage presence, finding a way to downplay his fairly volatile remarks with his wisecracking humor and angelic sound. For example, Tweedy spoke directly into the near orchestra seats of the audience, demanding that one tempo-impaired clapper refrain because it was “annoying as shit.” Then he followed with a wandering speech about truly loving his audience and fans and ultimately transcended it by going into another series of impeccable tunes, including the Golden Smog cover “Please Tell My Brother” and Wilco’s “Jesus, Etc.”

Tweedy’s four-song encore included a few Wilco classics, like “Humminbird,” which he mysteriously dedicated to a little girl named Haley in the audience (apologizing for his good natured, but nonetheless slightly profane language). Wilco keyboardist Mikael Jorgensen joined Tweedy for the song.

The set ended with “I’m the Man Who Loves You” off of Wilco’s beloved Yankee Hotel Foxtrot, demonstrating the refreshing way that Tweedy — haughty though he may be — isn’t above giving the audience what they want.

Perhaps this is what gave the performance such a warm and ethereal mood. In a world of extravagant stage personas and deadpan performance, stripped of the pomp that Wilco has (albeit deservedly) acquired, Tweedy’s solo performance left room for sentimentality. 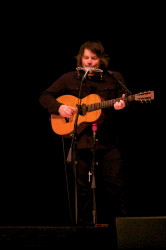 A version of this story appeared on page 13 of Thursday, January 9, 2014’s print edition of the Daily Nexus.