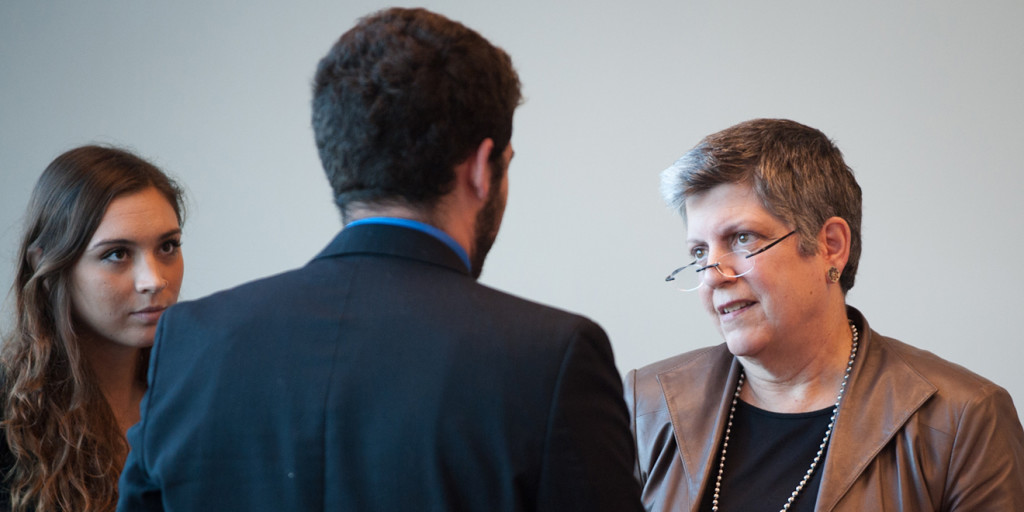 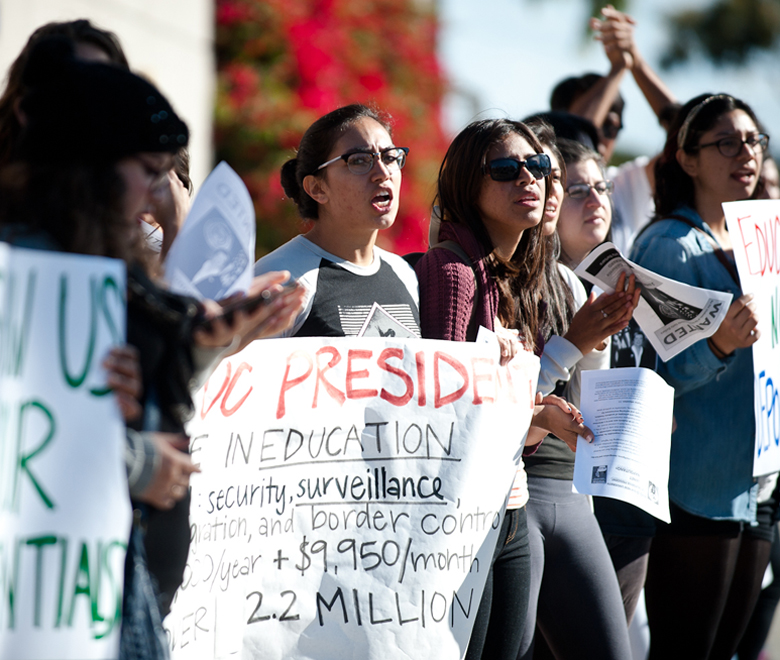 On Friday, a select group of students met with newly-appointed UC President Janet Napolitano at the Mosher Alumni House to address issues such as tuition rates, diversity at UC campuses and her controversial role as the U.S. Secretary of Homeland Security, while over 50 students protested outside the meeting.

Closed off to the rest of the campus community, the meeting featured representatives from Associated Students, the Residence Halls Association, InterFraternity Council and individual student organizations like Human Rights Board and the Student Commission On Racial Equality, or S.C.O.R.E. Beginning the meeting with an introduction about her personal history — such as roots in New Mexico and her time as former Secretary of Homeland Security — Napolitano asked students what they would do if they were in her position as the UC President.

Students like Muslim Student Association member and fourth-year Middle Eastern studies major Hani Tajsar began the discussion addressing issues outlined by the UC Student Association’s campaign I.G.N.I.T.E., or “Invest In Graduation Not Incarceration, Transform Education.” According to Hani, the state, as well as the UC, needs to reprioritize its funding from prisons to education.

“If I was in your shoes, I would, at the state level, try to take money away from California’s prison-industrial complex and redistribute that money into the education system,” Tajsar said.

In response to the question, Napolitano recognized that “the more people there are educated, the less likely they are to be in the criminal justice system” and said there are already “whole efforts” — at the statewide level — that are already addressing such issues.

After A.S. President Jonathan Abboud said Napolitano should address the increasing rate of student debt many students face, Napolitano said students will have to “deal with the new reality” of the need for the UC to look at public-private partnerships, technology transfer, alumni and greater philanthropic giving foundations and grants.

“There is no public university in the country that’s going to go back to the days when everything was underwritten by the state,” Napolitano said. “If [the state] decides to write us a huge check, that’s great. But our planning can’t depend on it.”

Human Rights Board co-chair Katlen Abuata said many of the UC’s investment decisions have had a negative impact on human rights abroad, ultimately working against the UC’s mission statement to serve society as a center of higher learning. She specified the UC’s working relationship with companies such as Raytheon — a Massachusetts-based corporation that specializes in weaponry and intelligence development — as one such instance of concern.

“I just wanted you to address how we can stop investing in these companies like Raytheon, and maybe take those investments and put them to a more useful use, like education,” Abuata said.

In response, Napolitano said an independent investment community outside the UC Board of Regents makes investment decisions and that organized efforts by students to divest from fossil fuels and companies like Shell Oil are already underway.

Black Student Union Co-Chair Alexis Wright addressed Napolitano on the absence of diversity on campus, noting that the black student population at UCSB has yet to rise above 5 percent since the 1960s. She also said there is a lack of diversity in faculty, and said there should be a statewide program that helps keep students of color in school while promoting diversity at all 10 UC campuses.

“I’m an RA currently at one of the dorms here, and I’m really concerned with the retention in students of color, and how that is not institutionalized at the UC level,” Wright said.

According to Napolitano, the UC has been working on making the graduate student and post-doctoral student demographic, as well as faculty, more diverse because those populations tend to lack equal minority representation.

“There are lots of things going on to increase diversity in the student body on campus, but the grad student population is less diverse than the undergrad population,” Napolitano said. “One of the things I did was already move some money into the fellowship program for post-docs.”

The new UC president has garnered much criticism for the record-breaking number of deportations made during her time as Secretary of Homeland Security, as well as for her lack of professional experience in academia. However, some students saw new opportunities in her recent appointment, such as president of the Student Veterans Organization, Paul Malone.

“What we see is an opportunity to use your experience to make sure that student veterans coming into the system are taken care of. … We know that there is a coming influx, and we need to be prepared, we need to be proactive.”

The issue of online education — a still-developing project of the UC — also made an appearance in Friday’s discussion. Napolitano acknowledged the setbacks of the UC going online, saying it is not a “silver bullet” in terms of resolving the University’s budgetary constraints. However, she said development of online courses should be addressed on a per-campus basis and be spearheaded by UC faculty members, while also addressing specific concerns of creating these courses.

“There is going to be a role for online education to augment what happens in the classroom,” Napolitano said. “The question is what is the content, how is that developed, and how is it used within the system. So that’s the kind of thing that’s being explored now.”

Gloria Campos, co-chair of I.D.E.A.S. — or Improving Dreams, Equality, and Success — a support and advocacy group for undocumented students, said if Napolitano genuinely wanted to reach out to students, she should have allowed for a public forum.

“We have such a small window of opportunity to meet with her and have our concerns and ideas voiced,” Campos said. “A public forum would be something greatly symbolic not only expressing her accessibility but also showing a little respect towards the students she should be prioritizing.”

“I, as a student, appreciate her coming in and talking to a select group of students. I liked how she was really receptive to having undergrad and grad student regents,” Choate said, “But, most of her responses were very political, as in she was trying to avoid root meaning of questions students would ask her.”