Chanting mantras like “Undocumented, Unafraid!” and “Hey hey, ho ho, Napolitano’s got to go!”, UCSB students rallied in opposition to the appointment of UC President Janet Napolitano, who will be attending a closed meeting with “student leaders” today.

Students are expressing outrage at the exclusivity of the meeting — which will take place at 9 a.m. at Mosher Alumni House — and are demanding that Napolitano take part in an open forum welcome to all students. The meeting was organized by administrators in the Division of Student Affairs and Associated Students officials, and 35 students — including representatives such as the Interfraternity Council President and A.S. president — will participate. The meeting will be closed off to other students.

Yesterday, students marched from the Student Resource Building to the Faculty Lounge, demanding a public forum with the newly appointed UC president, who was the Secretary of Homeland Security before becoming the new leader of the UC system.

Napolitano’s appointment, which came in July, has largely received backlash from many students since she is the first UC president to lack a background in education, previously acting as the governor as well as attorney general of Arizona. She has also drawn much criticism from the undocumented immigrant student community since she spearheaded the controversial Secure Communities program during her time as Secretary of Homeland Security. The deportation program seeks out undocumented immigrants using fingerprints by provided the Federal Bureau of Investigation, according to the site for Immigration and Customs Enforcement, and deported around two million undocumented immigrants — including non-criminal persons — during Napolitano’s term.

At yesterday’s protest, student held up a giant banner highlighting the “No” in “Napolitano,” students from UCSB’s I.D.E.A.S. — or Improving Dreams, Equality, Access and Success — as well as other campus organizations, marched past UC Police Department officers and CSOs until finally arriving to the Faculty Lounge, where they were met by Chancellor Henry T. Yang and Associate Dean of Student Life and Activities Katya Armistead. After criticizing Napolitano on her implementation of record-breaking deportation programs as former U.S. Secretary of Homeland Security, students asked Yang and Armistead if there could be a public forum allowing more students to speak than the few “student leaders” selected by administrators.

I.D.E.A.S. member and second-year student Abigail Salazar said many undocumented students on campus have been directly affected by Napolitano’s deportation programs, herself included.

“With all due respect, this is a person who has invaded my home, who has destroyed my family and I wasn’t even invited [to the meeting],” Salazar said. “I want to direct a lot of feelings that I have towards her. I have that right.”

Salazar also said administration’s decision to hold a private meeting instead of a public forum with Napolitano further insulted the undocumented student community.

In response to student demands, Armistead said Napolitano would leave right after tomorrow morning’s private meeting and that there was thus “not enough time for a public forum.”

“I’m not sure that everybody who was picked is happy to have an open forum,” Armistead said. “They actually want to have a dialogue, and the concern is — that this happens within the public forum, then nothing can happen and you can’t have a conversation.”

Attendees of tomorrow’s meeting include A.S. executive officials, leaders of campus organizations such as Human Rights Board, I.D.E.A.S. and S.C.O.R.E., or Student Commission on Racial Equality, as well as members of Greek life. However, some of the students invited are not currently the head of any campus group, according to Mario Vasquez, a member of Human Rights Board.

Chicano Studies professor Ralph Armbruster-Sandoval, who joined students in protesting today, said he has taught many students who have dealt with deportation on a personal level. He said student demonstrations should push Napolitano to support the undocumented student community and advocate for immigration policy reform.

“She could apologize for what she did, and she could put pressure on the Obama administration to stop what it’s doing,” Ralph Armbruster-Sandoval said. “It’s nearly deported two million people, which is more people combined than any other in U.S. history.”

Napolitano has also expressed support for the DREAM Act and undocumented students, and she recently devoted $5 million in UC funding to financial aid and special counseling for undocumented UC students, according to a UC Office of the President press release.

Fourth-year global studies major Norma Orozco expressed opposition to the appointment of Napolitano both because of her experience in the Department of Homeland Security and her lack of professional academic experience.

According to Armbruster-Sandoval, Napolitano should respond to student protest and demand for a public forum if she wants to save face as the rightful president of the UC.

“So the idea is to say, ‘Hey we’re not happy with this, listen to us,’” Armbruster-Sandoval said. “Apologize, do something, show some contrition, show that you’re a human being, that you have some heart, basically, because you’ve broken our hearts.” 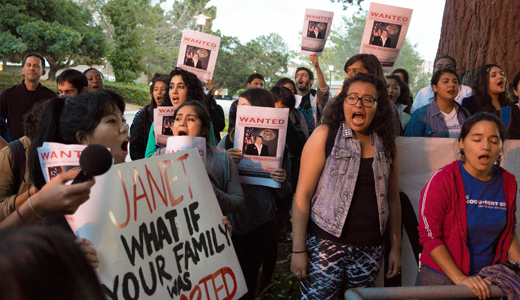 Most U.C. students are dynamic, energetic and aware; while
most moribund U.C. administrators collect bloated salaries for little valuable
work.

It appears to me that the U.C. is a proto-fascist, union
busting, undemocratic cabal run for the benefit of U.C. administrators, Wall Street
and the nuclear weapons industry by the wealthy power elite including Richard
Blum, Russell Gould, Charlene Zettel, Sherry L. Lansing and the UC Regents.
Janet Napolitano will fit right in and take off from where that lazy, useless
dork Mark Udoff left off.

On reading this story, I had a most unpleasant déjà vu moment as it struck me that those who run the University of California haven’t learned anything about the importance of giving students a voice and actually listening to them since my last year at UCSB in 1964-65, almost 50 years ago. That was the year the Free Speech Movement (FSM), led by Mario Savio, among others, shut down the Berkeley campus as students demonstrated against new restrictions on their free speech rights that forbade them from setting up tables to distribute political literature near Sather Gate, a means of… Read more »

Apologies for an omission in my list of things that have changed at UCSB: the appalling increase in the fees students pay to attend. Fifty years ago, the fees were negligible; attendance was almost free.

This veteran hating politician will destroy California’s UC system. How soon we forget that this is the lady who was in charge of the DHS allowing the TSA to grope little boys and girls who have no nexus to terrorism. What kind of pathetic position did we allow ourselves to be put in letting these things happen to our own children? The lame rationale given by the TSA for overbearing scrutiny and treating all travelers like convicts is simply unacceptable. This lady has done nothing for national security but push anti-veteran, anti-military, and now anti-student agendas. This jackboot hag needs… Read more »