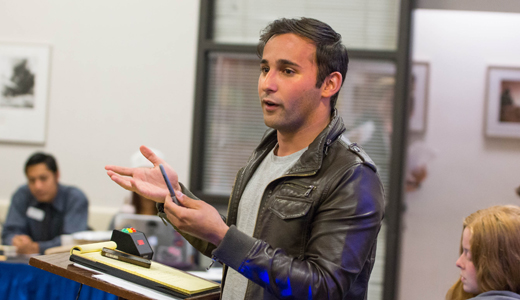 AS President Jonathan Abboud speaks to AS senators during the weekly AS Senate meeting on November 20, 2013. John Clow/Daily Nexus

Wednesday night’s Associated Students Senate meeting discussed a number of ongoing campus projects and issues, including development of a community center in Isla Vista called the A.S. Pardall Center — a center at 6550 Pardall that will be funded by student money and will be open to A.S. organizations.

So far, student officials have not extensively publicized the opening of the space to the general UCSB community, although the center will be entirely funded by student fees. The student government also discussed student support for UC workers, bicycle and skateboard safety and IGNITE, a program that stands for “Invest in Graduations, Not Incarceration. Transform Education.”

During the meeting Associate Director for Community Affairs Aaron Jones introduced recently hired staff member for the A.S. Pardall Center Jeanette Lyden, who will be staffing the first floor of the building from noon to 9 p.m. Monday through Friday for the next several months. He said Lyden will be there to “to provide a more consistent presence,” inviting students in A.S. organizations — known as Boards, Committees or Commissions, or BCCs — to stop by and utilize the space.

Rent for the space costs $5,000 per month and is currently open to A.S. students and members of BCCs. No concrete plan for funding has been formed, although the center will be paid by student fees regardless. Senator Amir Khazaieli has been working closely with an Ad-Hoc committee to search for which groups will contribute funds to the center over the next two years.

Jones encouraged students to “utilize and hang out in the space” and to continue to visualize what the space will be used for, recalling a recent instance by which the space was used.

“Just last night, CAB helped to co-sponsor the event with a frat or sorority or another org … where they had a carnival for youth in Isla Vista, and it was packed,” Jones said. “They had game stations set up all throughout the first floor, food, popcorn, games, it was great.”

During the meeting, student officials also spoke about the UC workers’ strike earlier in the day, which drew hundreds of participants campus wide.

Senator John Soriano spoke on behalf of UC service and patient care workers, highlighting the economic discrepancy between campus workers’ wages and wages of the national average. According to Soriano, university employees deserve better wages and pension pay than they are currently receiving.

“Because our employees make so little money, our employees qualify for many public benefits, including MediCal, food stamps, housing subsidies and childcare subsidies,” Soriano said.

In addition, a resolution in support of A.S. Bike Awareness Week — concerning pedestrian, skateboard and bicycle safety — was tabled. With a $90,000 budget, A.S. Bike Committee is currently looking outward for more funding assistance for their bike safety campaign causing Senators to argue over their request for more funding for items such as American Apparel t-shirts.

A version of this story appeared on page 3 of Thursday, November 21, 2013’s print version of the Daily Nexus.

The information presented in this article about the Pardall Center is 100% incorrect. The author took one quote, inviting the Association to use the space more, and presented it here Waaaayyyyy out of context. The Pardall Center is open to all students from 9am – 9pm (note: open earlier than noon), and as per the most recent directive passed by Senate, the space is being entirely funded through the different AS-groups’ budgets, as per the “AS Pardall Center Master Plan” If you have any questions or further comments I will be happy to answer them as the person in charge… Read more »

AS bikes with a 90,000 dollar budget?? Then why are all of the bike pumps around campus broken?

Great post. I used to be checking constantly this blog and I’m impressed!

Very helpful info specifically the remaining section :) I maintain such info much.
I used to be looking for this certain info for a very lengthy
time. Thanks and good luck.