The Daily Nexus
News
Australian Adventurer Speaks On 6,000 Mile Trip Through Eurasia
November 19, 2013 at 5:00 am by Elliott Wright 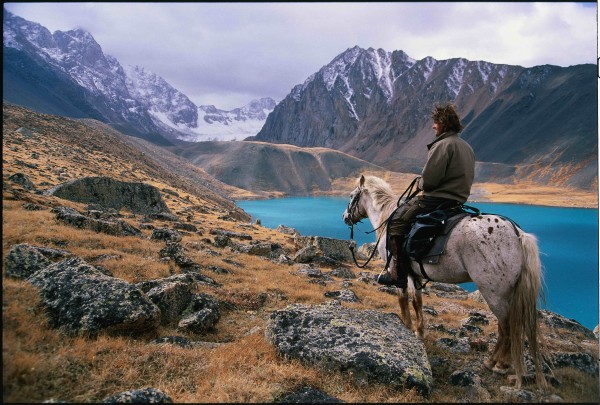 Australian adventurer, author and filmmaker Tim Cope spoke about his three and a half year trip chronicled in his book On the Trail of Genghis Khan: An Epic Journey Through the Land of the Nomads at Campbell Hall last night.

Hosted by Arts and Lectures, Cope’s talk detailed his 6,000 mile trip travelling by horseback across the entirety of the Eurasian steppe — from Mongolia to the Danube River in Hungary. During the trip, Cope faced hardships such as extreme weather, wolves and hunger, traveling eight to ten miles a day between subzero winters and scorching hot summers.

During his trip, Cope said there were several times he felt he could no longer continue and wanted nothing more than to return to Australia to be surrounded by friends and family. But his pace changed after he was given advice by a friend who told him to take his time.

“If you are going to rush, rush slowly,” Cope said of the experience.

Fourth-year physics major Cob Staines — who is involved in the UCSB Adventure Program and is familiar with Cope’s documentary and book — said Cope serves as an idol to the outdoor community since he holds a travel strategy that demonstrates an outstanding capacity for human navigation.

“The three and a half year adventure that he is most famous for, was done with very little preliminary technical skills,” Staines said. “He learned by experience through the assistance of community members around him.”

First year political science major Eric Lendrum said he was interested in how Cope’s experiences could be applied to what Lendrum is currently learning about in a history course on ancient civilizations.

“He is talking about his trek through the former countries of the Soviet Union and across that general region,” Lendrum said.

Thea Van Tonder, who has lived in Santa Barbara for 20 years after leaving her native land of South Africa, said she was fascinated by the way Cope incorporated ancient cultures into a trip he did in the 21st century.

“It’s off the beaten track and he brings in all the history of the past and tells us about the cultures that are still present today,” Tonder said. “I think he’s going to be a great travel writer, and we can expect more great books from him.”

Travel writer, photographer and adventure guide Rachel Thurston said she found a consistent theme between Cope’s travels and her own, in regard to the importance of connections forged throughout one’s life.

“In the traveling I have done around the world, I found the same thing Tim did. No matter where you are, people tend to be kind and generous,” Thurston said. “You can be in places on the edges of human existence, and the generosity is unsurpassed.”

A version of this article appeared on page 1 of November 19th’s print edition of the Daily Nexus.

My daughter, who is quoted in this article, told me about this splendid presention by Mr. Cope. She was completely impressed with everything about the evening. I hope to read his book and perhaps hear him in person someday.

Thank you for the fine article.