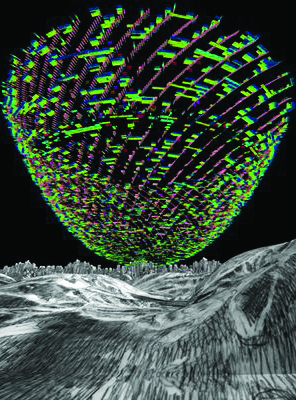 The UCSB Media Arts and Technology graduate program held a symposium based on musical experiments dealing with light and color.

As the first presenter, Ox took the audience through 40 years of her career in visual music, placing particular emphasis upon the relationship of time and space. Ox said she analyzed the architecture of buildings, in relation to the field of visual music and the artists whose pieces she worked with.

“The amount of space must be determined for every piece of music,” Ox said.

During his presentation, Barlow showed clips of his work while speaking on the creation of images through music and vice versa. He has performed at numerous music festivals, but said he enjoys the symposium setting more because people “are more interested on the visual aspect of what is being shown.”

His attempts to create music supplemented with visuals first began in 1972, while studying under German composer Karlheinz Stockhausen.

“I could hear the music on tape, but I needed to see it as well,” Barlow said.

Since then, he has worked extensively with Oskar Fischinger’s original works and Barbara Fischinger said at the event that Barlow adequately follows the path her father initially paved.

“He is going where my father would want with the work,” Fischinger said.

Aaron Jones, a graduate student in the MAT program, said he attended the symposium because he has taken several classes with Barlow as an instructor. Barlow’s use of algorithmic music first sparked Jones’ interest, and Jones said he was intrigued by the aesthetic similarities between work discussed in Barlow’s class and what was shown at the symposium.

A version of this article appeared on page 1 of November 18, 2013’s print edition of the Daily Nexus.

1. Barlow has not worked extensively with any of the original works of Oskar Fischinger, as stated. He is actually working without permission with images from only one film, from a bootleg copy he made. 2. Ms. Fischinger quote is fabricated. She has not approved of Barlow’s work, nor has the Fischinger Trust or estate ever given permission for Barlow to use Fischinger’s work publicly. In fact four persons with the Fischinger Archive and estate, over several decades, have denied his request to work with Fischinger’s works. 3. Titles/credits for Ox and Mongoven are incorrect. 4. Photo credit wrong, not… Read more »

I am misquoted here, I did not say this. I said that Barlow was going in one of the many directions my father had explored, and I did not say it was being done adequately. This is not true at all:
“He is going where my father would want with the work.”

My father’s work stands on its own. We do not condone Barlow’s exercise.